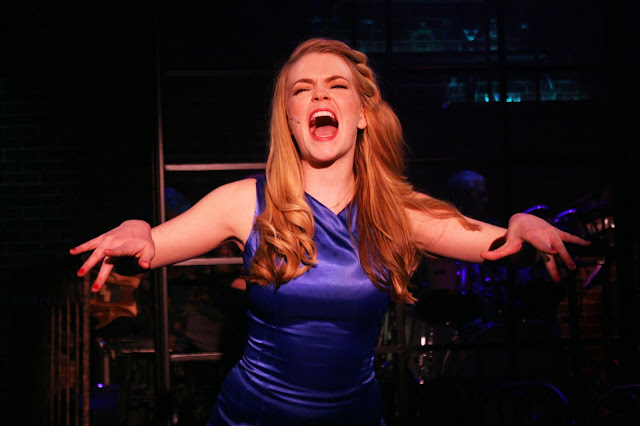 Colby Dunn (photo credit: Gary Duff)
The fifth production to grace the stage at Town Hall Arts Center this season is Leiber and Stoller’s “Smokey Joe’s Café.” This show is the longest running musical revue in Broadway history. It’s directed and choreographed by Matthew D. Peters, who won the Marlowe Award for both his direction and choreography of “SWING!” for this venue in 2014.
This song and dance revue features wall-to-wall rock and roll, R&B and blues songs.
Thirty-nine songs in all, some of the hits you will remember are: “Love Potion #9,” “Yakety Yak” and “On Broadway.”
The cast is full of the names of the brightest and best of Colorado vocalists.
Anna High, who stunned Denver audiences with her high voltage performance as Effie in Ignite Theatre’s production of “Dream Girls,” knocks it out of the park once more singing “Hound Dog,” “Kansas City” and “Saved.”
Olivia James, recently onstage in “Uncle Jed’s Barbershop,” produced by Cleo Parker Robinson, is a natural in both singing and acting. In her renditions of “Some Cats Know” and “You’re the Boss,” she shows us she can shift from comic to sultry and back again on a dime. 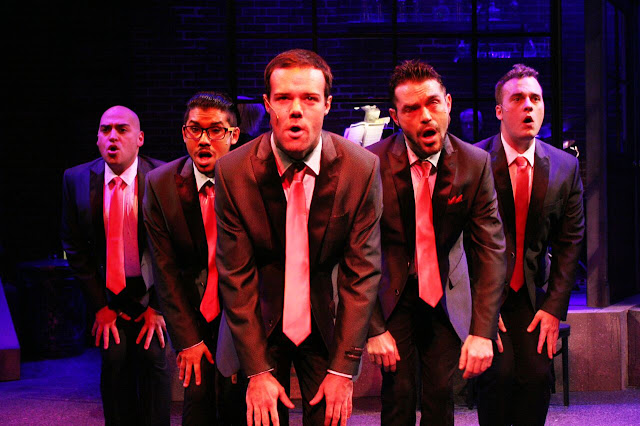 L-R: Jacob Villareal, Alejandro Roldan, Evan Sauvage, Matt LaFontaine and Ethan Knowles (Photo credit: Gary Duff)
Alejandro Roldan, who amazed audiences as Ritchie Valens in BDT Stage’s production of “Buddy,The Buddy Holly Story,” stuns with his performance of “Stand By Me”.
You will remember Jacob Villareal from his performances in “Young Frankenstein” and “Anything Goes.” His "Spanish Harlem” with Ms. James  as well as his singing of “Loving You” are  knock-outs.
Colby Dunn is a blonde beauty with a voice that must be heard to be believed. She nearly blew the roof off with her Town Hall Arts debut.
Matt LaFontaine’s singing-and acting- of “I, Who Have Nothing” is of the raw, passionate, explosive variety one seldom gets to experience on the stage anywhere. Outstanding!
Evan Sauvage gives us a very smooth “You’re the Boss” in his duet with Ms. James.
Jenna Moll Reyes delivers the goods with “Trouble” and “Falling.”
As for the dancing of Mr. Peters’ awesome choreography, Eric Pung,Chelley Canales,Will Treat and Rachelle King show us what it means to really move to the beat!
And as if all this were not enough… The Divine Donna Debreceni heightens the excitement with her incredible onstage band, featuring:  Tag Worley, Scott Alan Smith, Jason Tyler Vaughn, Bob Rebholz and Harry Grainger.