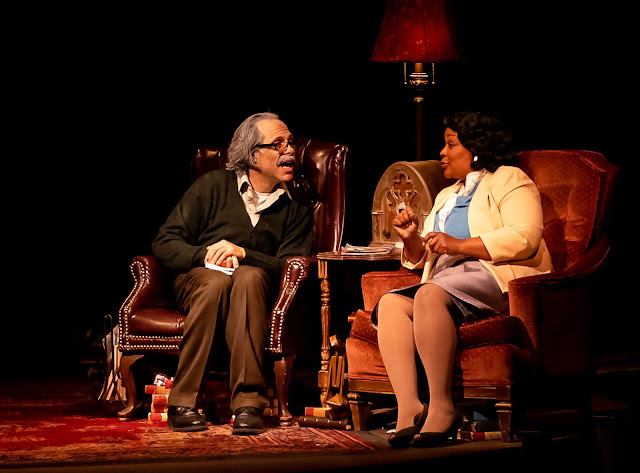 As written by Marc Acito, Secrets of the Universe and other songs is awash with provocative and humorous dialogue and glorious song that invite us as audience to sit back and revel in the beauty of the mysterious Universe in which we live.
This play about the lifelong friendship between Albert Einstein and opera singer Marian Anderson is not to be missed.
After one of her operatic successes in 1937 Ms. Anderson was unable to get a room in a hotel because of racial discrimination. Hearing this news, Einstein gave her an invitation to stay at his home. Out of this brief moment, a friendship grew that would last a lifetime.
Walking the tightrope of sly intellect and wry humor, Jordan Leigh nails the role of Albert Einstein with a performance that’s indelible!
Mary Louise Lee is luminous as Marian Anderson. Adorned by Linda Morken’s costumes, Denver’s first lady’s acting shines and her vocals soar.
The acting of Sharon Kay White as Einstein’s housekeeper, and of Marc Rubald as Ms. Anderson’s gay accompanist are as brilliant as always. And although they also play other famous people, one can’t help wishing that the playwright had given their characters more to do, so that their roles allowed for them to be onstage more. In numerous roles, Andrew Fischer slips with chameleon-like ease from one character to the next by the flip of a scarf or the donning of a hat.
The stunning technical work is a character all unto itself.
Brandon Phillip Case’s scenic design rises up above the usual level of the stage giving us Einstein’s cozy intellectual living space with mahogany furnishings backed up by a grand piano one level up and behind it.
Seth Alison’s lighting design, including delicate projections of stellar sparks in outer space and fluid ribbons of Physics formulas and equations, enhance the show immeasurably.
CeCe Smith’s sound design delivers the sonic equivalents of the shifting tides of time and space superbly.
Helen R. Murray’s direction is superb. Her casting is impeccable!  Ms. Murray creates the illusion of a vastly multidimensional universe in which time and space are truly “relative” and utterly simultaneous. If one might offer one suggestion it would be that there be no intermission, allowing the illusion of the cosmic flow to continue to expand right up until final curtain.
Ms Murray’s direction of this production reminded me of the excitement I used to feel at the Denver Center Theatre Company back in 1995 when there were such experimental productions as “Beethoven and Pierrot” and “The Stories of Eva Luna,” directed by such Czech directors as Pavel Dobrusky and his Norwegian counterpart, Per-Olav Sorensen. Shows in which the elements of wonderment and surprise were so great they would lift you right out of your seat!
Don’t miss this show!

For tickets call 303-739-1970 or go online at AuroraFox.orgMarlowe's Musings
Posted by David Marlowe Theatre Reviews at 8:57 AM No comments: 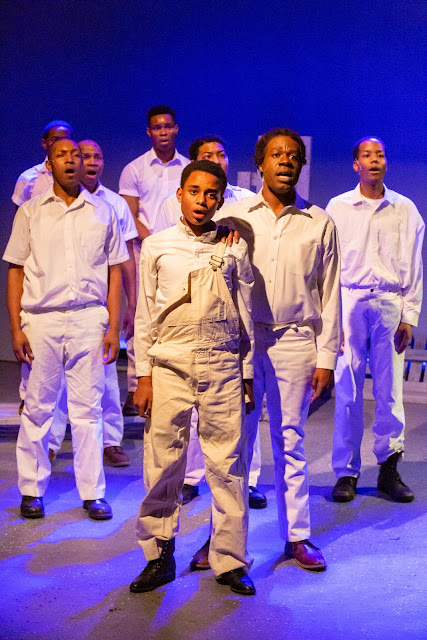 The cast of The Scottsboro Boys (photo credit RDG Photography)

The rich and thrilling season at Vintage Theatre continues with the regional premiere of THE SCOTTSBORO BOYS.
Under the astute direction of Betty Hart, this show is as harrowing as it is entertaining.
With music by John Kander, lyrics by Fred Ebb and book by David Thompson, this musical has an edge reminiscent of Kander and Ebb’s other musicals, such as Cabaret, Chicago and Kiss of the Spider Woman.
This reminder of the horrifying event that sparked the Civil Rights Act, describes the fate of nine African American lads who hop a train looking for adventure in 1931, and instead find themselves confronted by two lying southern girls who accuse them of rape.
It’s a hard watch that’s infused with vaudevillian humor that’s both vulgar and garish. You know, the kind that makes you laugh and wince simultaneously? Much of this is delivered with brilliant panache by Denver favorites Dwayne Carrington (Bones) and Michael Peters (Tambo.)
With his powerful acting and singing,
Christopher Razor delivers a tour de force as Haywood Patterson. From “Starting in Chatanooga” to “Make Friends with the Truth,” to “You Can’t Do Me,” Mr. Razor’s performance shines!
The two ignorant and malefic white girls, Victoria Price and Ruby Bates, are played to hilarious eye-rolling perfection by Jayvon Rollerson and Randy Chalmers respectfully.
From the exhilarating first number to those describing a macabre nightmare and a longing for home, the score is exceptional.
Musical director Lee Ann Scherlong rises to the challenge once again, providing us as audience with sensational choral work as well as dynamic orchestral work from the offstage band.
Phil Cope’s minimal set design and Kevin Taylor’s intense lighting design -it even includes footlights- allow the actors to really pop.
Christopher Page-Sanders' choreography is inventively creative and precise.
This reviewer had wondered if the director might have included mirrors to reflect us as audience in the proceedings. This was not needed however.  Director Hart has instructed Timothy Kennedy as the Judge and Governor  to run out into the audience periodically soliciting validation from audience members. “Are you having fun? Enjoying the show?”
Generally performed without an intermission, the decision to include a break is a brilliant one, allowing the audience a brief respite from the harsh subject matter.
Adults looking for an evening of powerful musical theatre should run to get tickets!

Posted by David Marlowe Theatre Reviews at 1:06 PM No comments:

WHEN WE WERE YOUNG AND UNAFRAID
THE JOHN HAND THEATER: FEB 15 – MARCH 14 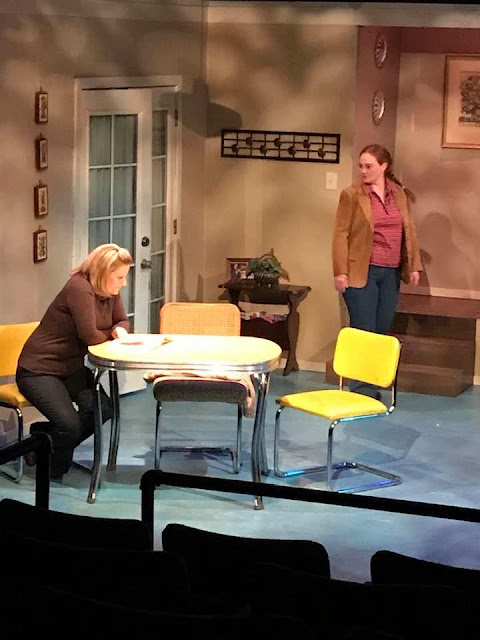 Firehouse Theater Company's production of When We Were Young and Unafraid is a powerful one.
Set on an island off the coast of Washington, Sarah Treem’s play focuses on a bed and breakfast that doubles as a safe house for battered women.  It’s 1972 and The Violence Against Women Act has not yet become law. The Equal Rights Amendment had just been passed.
Agnes, the bed and breakfast’s owner/manager, has her hands full counseling and protecting the abused women who find their way to her ‘underground’ shelter.
Abby Apple Boes’ debut in the director’s chair is a stunner. Having cast the show to perfection, Boes elicits performances from her cast that are filled with raw emotion that’s real and credible.
Mariel Goffredi portrays Mary Anne, a woman escaping an abusive relationship. Ms Goffredi, who stunned with her performance as Agnes in Vintage Theatre’s “Agnes of God,” will have you in tears with her superb work in this production.
Suzanne Nepi’s grounded portrayal of the compassionate Agnes, serves as an anchor in this harbor full of angst and despair.
Kelly Uhlenhopp turns in a powerful performance as Hannah, a militant feminist, who spices up the proceedings brilliantly.
New to this reviewer were Sarai Brown as Agnes’s ‘daughter,’ Penny, and John Wittbrodt as Paul, one of Agnes’s boarders. (Mr. Wittbrodt is the only male actor in this otherwise female-driven play.)
Jeff Jesmer’s realistic set design is the professional artistry that the Denver audience has come to expect from him.
Rick Reid’s sound design stitches the scenes together flawlessly.
Steve Tangedal does his usual magic with the lighting design.
Rachel Finley’s costume design is spot on.
Not for the kiddos, this show takes a hard look at these women’s pain and terror.


It will make adults wince more than once.
Adult situations and language.
Marlowe's Musings

Posted by David Marlowe Theatre Reviews at 4:53 PM No comments: 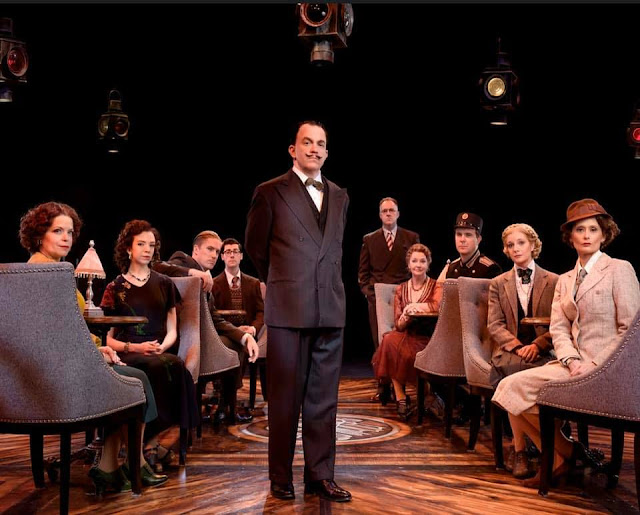 The cast of Murder on the Orient Express

Agatha Christie’s MURDER ON THE ORIENT EXPRESS was published in 1934.
Adapted for the screen, this murder mystery was directed by Sidney Lumet in 1974, and by Kenneth Branaugh in 2017. Subsequently Ken Ludwig has adapted it for the stage.
Brimming with delicious characters and overflowing with suspense, Mr. Ludwig’s adaptation has now been directed by Geoffrey Kent for Arvada Center.
This production is a triumph in every respect. Director Kent has cast the show impeccably and paced it like a runaway locomotive. His ingenious choice to choreograph the scene changes by having the actors remove and/or replace stage furniture is carried out with the precision of a military drill.
Upon entering the Arvada Center’s black box theatre which has been reconfigured for in-the-round viewing, one finds himself within the illusion of an international train station in 1934.
Thanks to Brian Mallgrave’s inventive scenic design and Shannon McKinney’s superb lighting design one is transported visually.
It is, however, Jason Ducat’s sound design which gives us our auditory ticket. His is perhaps the most evocative sound design this reviewer has experienced in several years.
Mr. Ducat’s sonic choices took this reviewer back half a century to European travel by train – primarily in France. Ducat’s choices for sound effects and musical bridges between the scenes enhance the production immeasurably.
The technical work for the set-up creates a sense of exhilarating anticipation in the theatregoer that gives one goosebumps even before we meet the actors.
Once the actors have entered, we are regaled with dazzling costumes that are the work of master costume designer Kevin Copenhaver. Although the entire cast is outfitted in wardrobe that is striking, the exquisite frocks for Ms. Weiss as Princess Dragamiroff and Annie Barbour as Countess Andrenyi, are truly eye-popping. The sensible chic costuming for Ms. Austgen as Mary Debenham is also extremely easy on the eye.
The director has cast a very fine actor named Kevin Rich in the role of Hercule Poirot.  Rich does a fine job creating his own debonair take on Agatha Christie’s famous detective, without relying on the work of previous actors or our memories of the stereotypical Poirot.
Kevin Hart (Marlowe Award for his Willy Loman in The Edge Theatre’s “DEATH OF A SALESMAN”) is outstanding as Monsieur Bouc, the owner of the railway line. From his back-slapping bonhomie upon first meeting Poirot, to his character’s hysterical alarm about a possible scandal, Hart nails it.
Edith Weiss, (Marlowe Award for her performance as Death in the Catamounts’ “EVERYBODY”), portrays Princess Dragomiroff. Ms. Weiss’s spectacular Russian accent, regal presence, and eye-rolling disdain for Greta Ohlsson, make it impossible to take one’s eyes off her.
Emily Van Fleet gets to show off her acting skills as Greta Ohlsson, a missionary who’s an emotional basket case, by whining and dropping to the floor in hysteria at the slightest drop of the proverbial hat.
Annie Barbour plays Countess Andrenyi with an aloof - and alluring - demeanor that is spot on.
Jessica Austgen, (Marlowe Award for her indelible Doreen in Arvada Center’s TARTUFFE), is luminous as Mary Debenham, the secret lover of Colonel Arbuthot.
Kate Gleason is appropriately loud and abrasive as Helen Hubbard, the character played by Lauren Bacall in the 1974 film.
Jake Mendes is well cast as Mr. Ratchet’s nervous secretary, Hector McQueen.
Zachary Andrews plays Colonel Arbuthnot, Mary Debanham’s paramour, with dashing presence and an excellent Scottish accent that leans into one’s memories of Sean Connery.
Josh Robinson plays the know-it-all Head Waiter and Michel, the Conductor, with his usual professional aplomb.

For tickets call the Box Office at 720-898-7200 or go online at arvadacenter.orgMarlowe's Musings

Posted by David Marlowe Theatre Reviews at 9:42 PM No comments: