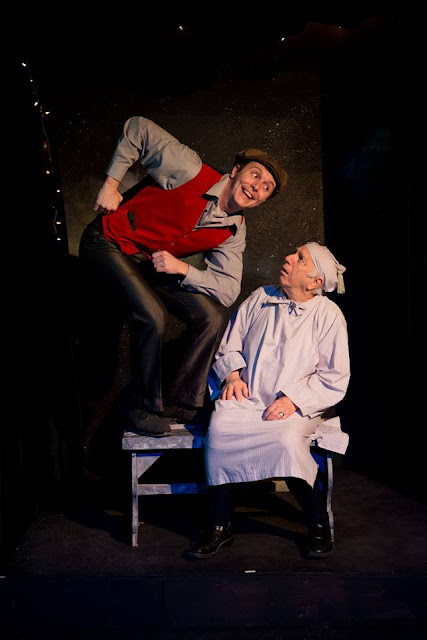 As directed by Katie Mangett, “Jacob Marley’s Christmas Carol” is sheer theatre magic. Mangett has cast the show impeccably with actors who are supremely talented.
James O’Hagan-Murphy, whose critically acclaimed performance as “RFK” has had numerous revivals, portrays Marley.
Joey Wishnia, who has won the Henry Award for Lifetime Achievement and Excellence in Theatre and whose list of theatre credits is too long to list, plays Scrooge.
Fresh off a run of Alan Ayckbourn’s “Woman in Mind” at The Edge Theatre, Gina Walker plays the Bogle.
Vintage regulars will recognize Darcy Kennedy from performances in “A Streetcar Named Desire” and “The Lyons.” In this show Kennedy portrays the records keeper.
The script by Tom Mula gives us a new spin on the traditional tale about Ebenezer Scrooge as seen through the eyes of Scrooge’s partner, Jacob Marley. Mr. Mula’s writing is of such a clear and distinct nature and the elocution thereof by these actors so articulate that it makes one feel as though he were a spellbound child listening to a tale told by the most gifted of storytellers.
The story begins with Marley’s death seven years prior to Scrooge’s fateful night full of Christmas ghosts. Miserable in his own private purgatory, the records keeper introduces the forlorn Marley to a mysterious and fascinating spirit guide called the Bogle. It seems the price of Marley’s release from this disagreeable after world is getting his old partner Scrooge to stop being so callous and insensitive to the needs of others. But Marley scorns Scrooge as much as Scrooge hates Christmas.
So…how does one get coaxed into assisting in the redemption of the repulsive Mr. Scrooge? The records keeper knows of course. So does the Bogle.
However… you, dear reader, will have to experience the journey first hand.
And if superb direction and an outstanding ensemble were not enough to have you running to the box office, let me also tell you that Luke Allen Terry’s sound design is quite simply the season’s best!
Scratch whatever’s on your calendar this weekend. The run ends Sunday.Marlowe's Musings 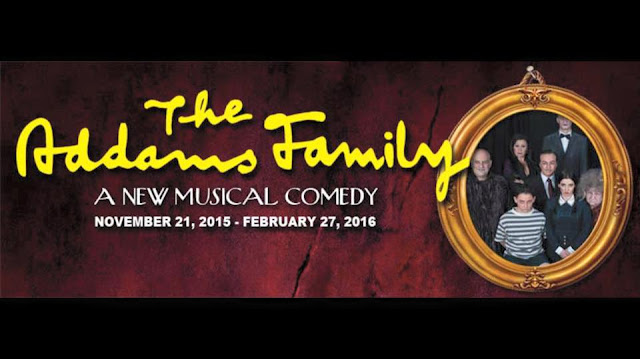 BDT Stage’s production of “The Addams Family, the Musical” provides a scrum diddly antidote to the sometimes saccharine and often cloying offerings of the holiday season.  It’s non-traditional and nostalgic as well for the lovers of the television series that aired in the mid-sixties.
Right from the start the audience is involved snapping their fingers twice after each “duh duh duh dut” preceding the lyrical description of this crew – I almost said coven – as  “creepy and kooky, mysterious and spooky, altogether ooky-The Addams Family.”

As Morticia, Alicia King glides across the stage with serpentine arms afloat or tiptoes on little cat feet when she’s not gracefully accompanying Scott Beyette’s Gomez in a sultry and deadpan tango. Scott Beyette brings great good humor to his portrayal of Gomez. In a performance laced with the accent and flirtatiousness of a real Latin lothario, Beyette stuns.

Wednesday (Sarah Grover) is the sullen center of this shadowy tale. Had she not fallen for a normal guy the only plot would be outside in the family cemetery. This smitten kitten’s asking Gomez to keep the secret of her impending bonding with her normal guy causes Gomez to be trapped between the support of his daughter and the requisite keeping of a secret from his beloved Morticia. Ms. Grover, who first dazzled BDT Stage audiences as the innocent Dorothy in “The Wizard of Oz,” proves she can portray the wonderfully weird Wednesday equally well.

Barb Reeves communicates the foolishly well-meaning Grandmama’s old school cranky and twisted wisdom with brio. The pouty Pugsley (Owen Leidich) is the masochist in the family; and that’s just fine with Wednesday who treats him to being stretched on the rack till he screams.

Brett Ambler (the memorable Buddy Holly in BDT Stage’s recent "The Buddy Holly Story") proves how versatile an actor he is. His geeky average Joe portrayal of  Wednesday’s new squeeze Lucas Beineke, is a radical departure from the 50’s rock star he so recently embodied.
Lucas’  “normal” parents, Alice (Joanie Beyette) and Mal Beineke (Scott Severtson), who have come to dinner in The Addams’ crypt-like home, mirror the strait-laced Dindons who come to dine with Georges and Albin in “La Cage Aux Folles.”BDT Stage favorite Joanie Beyette belts out a sensationally hilarious rendition of “Crazier Than You,” as she lets it all hang out in an after dinner game sponsored by Morticia.

Casey Andree's Lurch is as ominously still as one might expect barring the occasional basso groan. His vocal participation in the final number, “Move Toward the Darkness,” is as startling as it is amusing.

Lighting designer Brett Maughan gets a workout illuminating this show, which makes one recall the daunting challenges cinematographers encounter when shooting day for night. Maughan’s luminescent personification of the moon, which is being adored and courted by a gleefully leering Wayne Kennedy, is masterful.

BDT STAGE is located at 5501 Arapahoe Avenue in Boulder, Colorado,80303


For tickets go online at bdtstage.com or call the box office at 303-449-6000Marlowe's Musings
Posted by David Marlowe Theatre Reviews at 8:48 AM No comments: 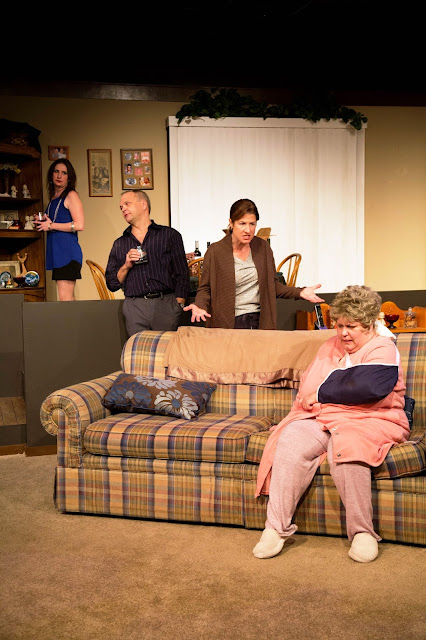 Exit Strategies is a black comedy about a dysfunctional family in which the irreverent comedy nearly overshadows the darkness.
At the top of the play Chance Gold, a somewhat successful playwright, returns home for his father’s funeral.
Accompanied by his hooker friend Kai (Missy Moore), Chance prepares to do battle with his estranged mother (Emma Messenger) and sister, Rachel (Emily Paton Davies.)
Andrew Uhlenhopp is a whirlwind of acerbic wit and amusing gesticulation as Chase, a man whose exit strategy from reality is drinking “because it makes other people more bearable.”
Emma Messenger portrays mama Sheryl with passive aggressive matriarchal swipes filled with guilt-laden barbs aimed at each and all.
Emily Paton Davies as Chance’s sister Rachel, anchors the play with a solidly realistic portrayal full of scalding vengeful rage.
As Kai, a very sexy Missy Moore portrays the voice of reason in the play while providing support for Chance, who’s already grieving the loss of his life partner.
Kate Marie Folkins’ direction is very fine indeed.
As for Jeffrey Neuman’s writing?    A+

Posted by David Marlowe Theatre Reviews at 1:16 PM No comments:

A few months ago a dear friend who has produced countless musicals told me it was utterly ridiculous to think that anyone could successfully produce “Funny Girl.” He had tried and failed. His contention was that Barbra Streisand had made such an indelible mark with her characterization of Fanny Brice that no actress could ever approach the role and no director could ever create a successful production.

Ms. Marsh has a certain resemblance to Streisand in her face and figure, but this portrayal of Fanny Brice is one hundred per cent Lauren Cora Marsh. This artist not only makes the role her own. She also delivers the quirky mannerisms and scrappy heartbreaking feistiness of the real Fanny as she electrifies her audience.

“People,” “I’m the Greatest Star” and “Don’t Rain on My Parade” are just a few of the songs you will be treated to by this rising star!

Keegan Flaugh provides a solid Nicky Arnstein that gives us a resonant voice and confident stage presence which infuses the show with just the right romantic tension. Flaugh delivers “I Want To Be Seen With You” and “You are Woman, I Am Man” with brio.

Suzanne Connors Nepi gives us a Mrs. Brice that’s a treat to watch.  “Who Taught Her Everything She Knows,”. her duet with James Bloom (Eddie) is a complete delight.

Posted by David Marlowe Theatre Reviews at 10:14 PM No comments: 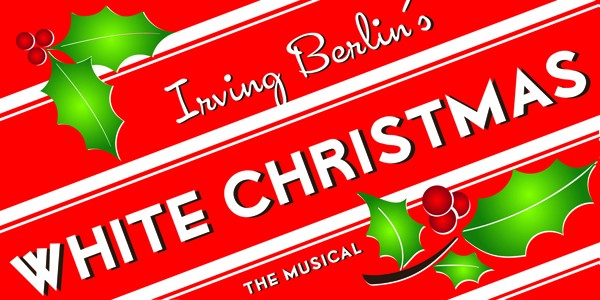