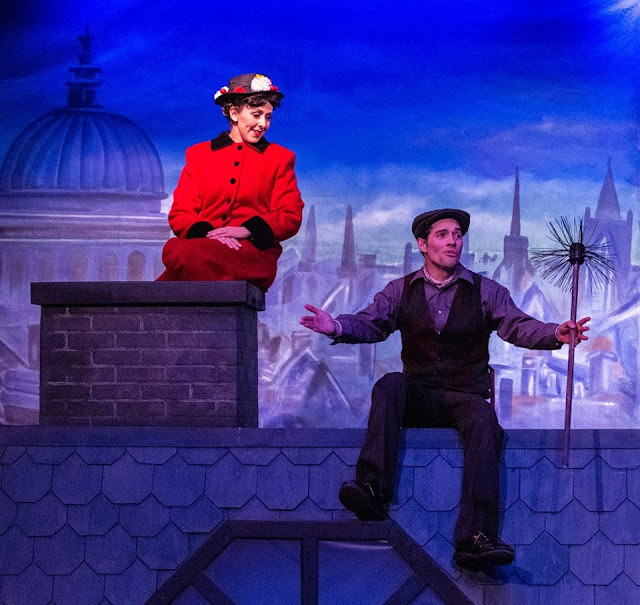 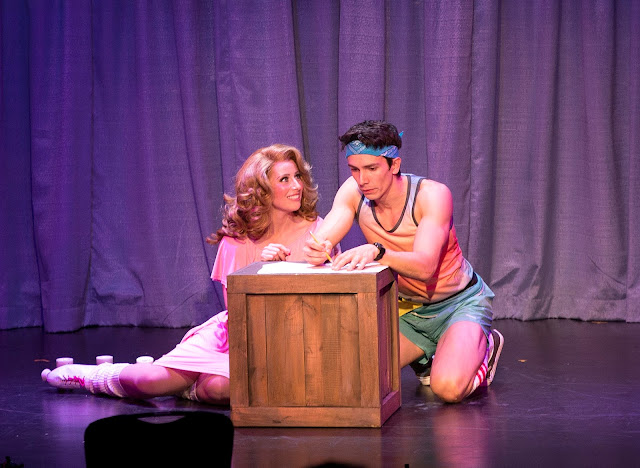 Kitschy, kookie and intentionally campy, XANADU, now on view at The Garner Galleria, is totally awesome, rad and gnarly.
Based upon the 1980 Universal Pictures film of the same title, it’s the perfect antidote for the five o’clock news as well as a great choice for date night for those seeking feather-weight, fluffy entertainment that’s delightfully ear-pleasing.
Visually, it’s a rainbow of celestial colors that play out in the costumes (Meghan Anderson Doyle) and lighting (Charles R. McLeod). So whether you’re looking to revisit this cult classic for reasons of nostalgia or just in the mood for a silly, goofy romp enlivened by fantastic actor/singer/skaters - yes, it’s all done on roller skates! - you can’t go wrong getting tickets for this celestial, yet remarkably down-to-earth, (sorry!) evening of musical theatre.
The story is all about the adventures of the goddess Kira, who comes down from Mount Olympus to be the muse for a struggling mural painter, named Sonny on Venice Beach. Just as in Greek mythology, when the Goddess falls in love with the mortal, all kinds of mayhem breaks out with her goddess sisters and father, Zeus.
Lauren Shealy ravishes the eye and the ear as Kira, in one of the best musical theatre performances of the year! This accomplished actor/singer/dancer is a Denver favorite who makes Olivia Newton John take a back seat in both looks and vocal prowess.
Marco Robinson is terrific as Sonny, the struggling mural artist, and Kira’s paramour. This artist is exceptional in his duets with Ms. Shealy: “Magic” and “Suddenly.”
As Calliope, Sarah Rex dazzles us with her singing of “Fool” and “The Fall.” Ms. Rex has rocked Denver with incredible performances of such characters as: The Narrator in “Joseph and the Amazing Technicolor Dreamcoat,” and Ellen in “Miss Saigon,” both at The Arvada Center for the Arts and Humanities.
Sheryll McCallum (Melpomene) is a force to be reckoned with belting out “Evil Woman.”
Aaron Vega is the Gene Kelly stand-in as Danny McGuire. This actor, whose character lost his muse long ago, turns in super smooth vocals as Danny, in “Whenever You’re Away from Me” and later as Zeus, in “Have You Never Been Mellow?”
Doused with a spectrum of pastels in cotton candy colors and sprinkled with a rainbow of shimmering sequins, it’s certainly visual ambrosia.
Grab one of the specialty cocktails being served up at the bar – The Zeus or The Kira – and kick back for an evening of blissful musical theatre comedy of the light, fluffy and delightfully entertaining variety.
With Tag Worley on drums, Dave Demichelis on guitar and music director David Nehls on keyboards, this three-piece onstage orchestra sounds incredibly full!
The show is directed and choreographed by Joel Ferrell.Marlowe's Musings

With music and lyrics by Jeff Lynn and John Farrar and a book by Douglas Carter Beane, XANADU will play the Garner Galleria Theatre from 11/9 to 4/28.
For tickets go online at denvercenter.org or call 303-893-4100
Posted by David Marlowe Theatre Reviews at 1:18 PM No comments: 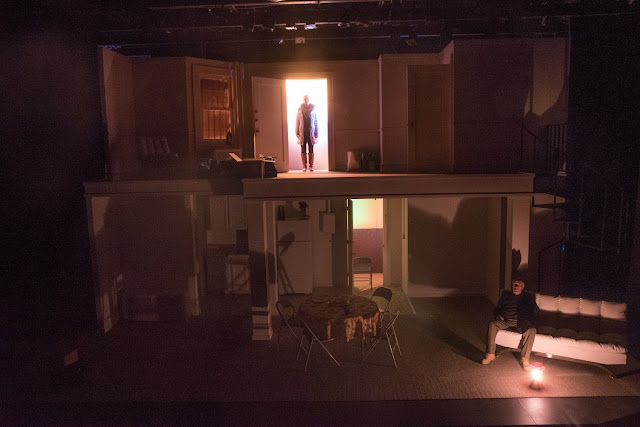 Not your usual holiday fare, Stephen Karam’s Tony Award-winning play, THE HUMANS, plays out at a Thanksgiving dinner in an apartment in lower Manhattan.
Kevin Hart leads a uniformly fine cast with an outstanding portrayal of Erik Blake, the patriarch of this dysfunctional clan. Hart, who dazzled Denver audiences with his outstanding portrayal of Willy Loman in The Edge Theater’s production of DEATH OF A SALESMAN earlier this season, proves once again what a powerful presence he is in dark, serious drama.
As Erik’s wife, Deirdre, Annie F. Butler gives a nuanced portrayal of a woman suffering from wounds of disregard and neglect.
Anastasia Davidson portrays Erik and Deirdre’s daughter, Brigid. New to this reviewer, her engaging performance makes one hope to see her soon again upon the Denver stage.
Susannah McLeod portrays the couple’s other daughter, Aimee, whose sparkling personality and bright smile veil a year filled with tragedy.
Antonio Amadeo, who was nominated for a Henry Award for his performance in A KID LIKE JAKE at Benchmark Theatre and gave a breathtaking performance as Biff in The Edge Theater’s DEATH OF A SALESMAN, is Richard Saad, Brigid’s acquiescing boyfriend.
Delivering a heart-breaking portrayal of a woman suffering from dementia, Kathryn Grey is brilliant as Momo.
Dee Covington delivers her directorial concept with a stealth-like pacing.
Charles Dean Packard’s excellent lighting design creates the perfect eerie, mysterious mood.
Markas Henry’s superb two-level set, complete with spiral staircase and intentionally dilapidated furnishings, is one of the best scenic designs so far this season.
Jason Ducat provides such an intentionally nerve-jangling sound design that the sonic effects so integral to the piece, almost become another character.
This is provocative theatre that’s not for the theatregoer looking for a night of light, fluffy entertainment.
Disturbing, and at times uncomfortable, THE HUMANS will reward those seeking an evening of theatre as Art.
Marlowe's Musings

Posted by David Marlowe Theatre Reviews at 12:16 PM No comments: