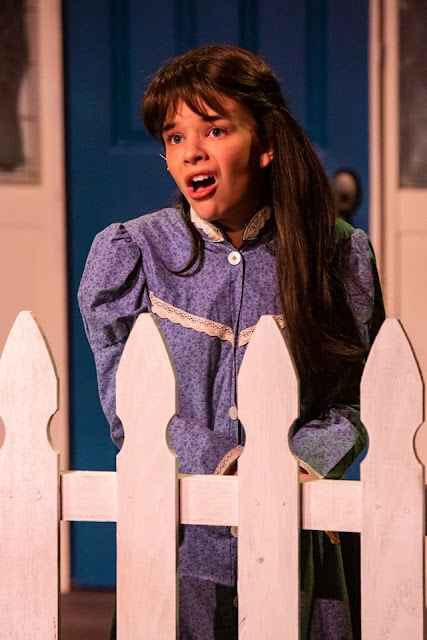 Based upon Natalie Babbit’s 1975 American children’s novel, Clauria Shear’s and Tim Gederle’s “Tuck Everlasting, the Musical,” looks at the value of immortality. According to the author living forever may not be all that it’s cracked up to be.
Every child threatens to run away from home at one time or another. In this story Winnie Foster actually does it. When she sees a young man named Jesse Tuck drinking from a stream under a wondrous tree in the town of Treegap, her adventure really begins. Jesse makes sure that Winnie doesn’t drink from the spring and then introduces her to his family, all of whom have drunk the water.  ( I almost said,”kool aid.”)
A man in a yellow suit pursues the Tucks for his own nefarious designs. (No spoilers here.)
It’s a family friendly story with music by Chris Miller, lyrics by Nathan Tysen and book by Claudia Shear and Tim Federle.  It’s an intriguing musical with a melodious score about living your life to the fullest.
Thanks to Director Michael O’Shea for casting some exceptional young stars. One must also thank music director Isabella Duran for making those stars shine vocally.
It is, however, choreographer Adrianne Hampton who must be lauded for turning many of those shining young stars into a constellation of sparkling luminosity.
Ms. Hampton’s choreography is breathtaking.
Sophia Dotson is outstanding as Winnie Foster. Both vocally, and in the acting, Ms. Dotson is a natural. “Top of the World,” her duet with Mr. Tanega, and “Everlasting,” her solo at final curtain, are both indelible.
Brian Trampler and Nathanial Waite-Lutz as Constable Joe and Hugo, perform a thoroughly enjoyable vaudevillian song and dance duet called “You Can’t Trust a Man.”
Elton Tanega (Jesse Tuck) is superb vocally. His singing of “Top of the World” and “Seventeen” make this actor’s name one to search out in every program.
As Mae Tuck, Hannah Quinn delivers the poignant number, “My Most Beautiful Day,” with heartfelt gusto.
Recalling such characters as that of Bob Fosse’s portrayal of the snake in the Lerner and Lowe film, “The Little Prince,” Todd Black delivers a vivid portrayal of the disturbing ‘man in the yellow suit.’ This actor’s singing of “Join the Parade” and “Everything’s Golden” at the top of Act Two is most memorable.
There’s a nice set by Ryan Walkoviak, which features a towering tree, a county fair scene and the quaint and rustic homestead where the Tucks reside.
Marlowe's Musings

Posted by David Marlowe Theatre Reviews at 4:26 PM No comments: 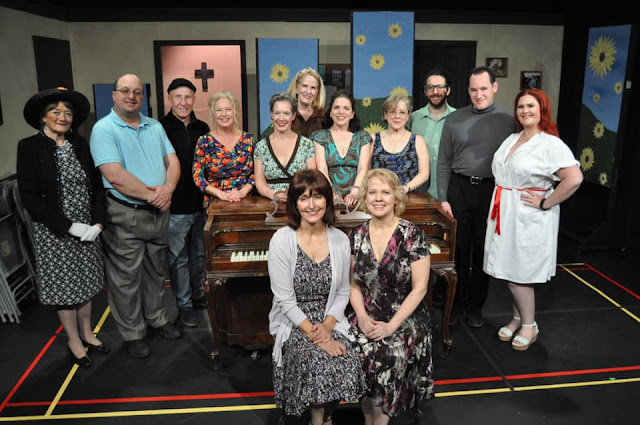 Posted by David Marlowe Theatre Reviews at 9:05 AM No comments: 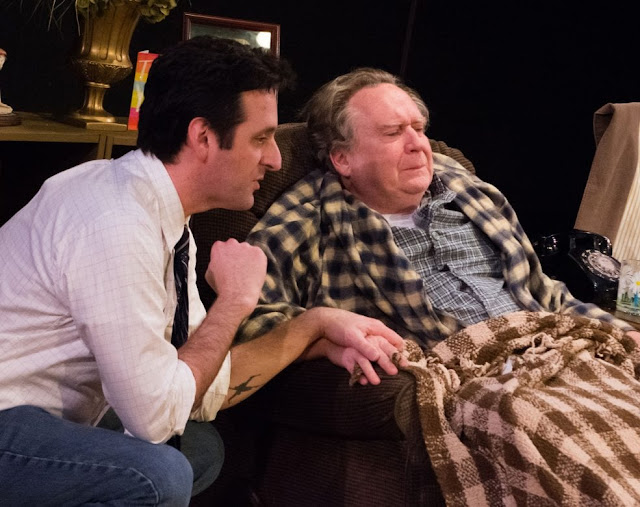 Cherry Creek Theatre’s current production of Mitch Albom’s  book, TUESDAYS WITH MORRIE, adapted for the stage by Mr. Albom and Jeffrey Hatcher, is a gloriously heartfelt success.
The show stars Chris Kendall as Morrie Schwartz and Antonio Amadeo as Mitch Albom in an acting duet that will remain in your heart and mind for a very long time.
Directed by Denver favorite, Billie McBride, the show is cast impeccably.
Chris Kendall’s stillness and slow measured speech contrasts with the vital nervous movements of Mr. Amadeo perfectly.
On the surface Mr. Albom’s work seems to be dealing with death. And it is. However… it is perhaps more correct, since we’re all dying,to say that it’s talking about Life and the living thereof.
It’s a slight, honest work that everyone should honor with his attendance. To say more – and I understand many of the other reviewers have - would give too many spoilers and ruin the experience.
Mr. Kendall, Mr. Amadeo and Ms. McBride are all MARLOWE AWARD winners. Search for their names in every program.
TUESDAYS WITH MORRIE continues the trajectory of Cherry Creek Theatre’s ascension following their crystalline production of A LITTLE NIGHT MUSIC.  What once had hit and miss productions, Cherry Creek Theatre has become a  company whose productions demand to be seen.
Run to get tickets.

Posted by David Marlowe Theatre Reviews at 11:55 AM No comments: 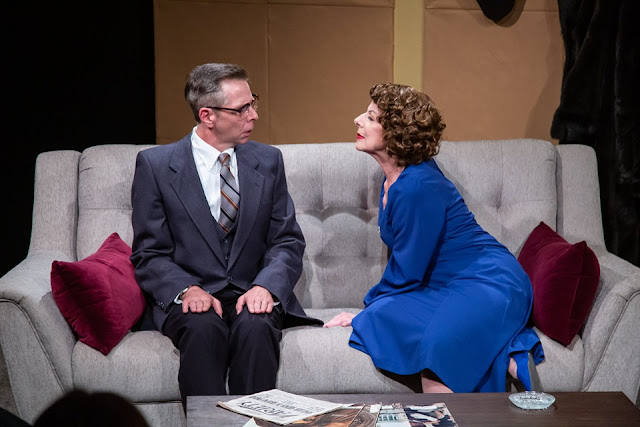 Eat your heart out Broadway! Deborah Persoff’s performance in the role of Tallulah Bankhead in Vintage Theatre’s production of the regional premier of Matthew Lombardo’s LOOPED is acting that’s better than anything you get in New York City. Craig Bond’s direction … Magnificent!

The casting is impeccable and the pacing has a great natural feel to it that makes us as audience feel as though we’re right there in the studio with her.
What an entrance! Chameleon-like, La Persoff morphs into Tallulah
Bankhead with flawless ease. Dame Persoff is a Triumph as this diva with a pocketful of bawdy zingers and gut-busting punchlines.  I promise you that you will find yourself, as this reviewer did, over the moon with this dynamic, energizing performance.
Promiscuous, a drug addict and a lush, Tallulah was one of Hollywood’s adored ‘bad girls.’ Brilliant in “The Little Foxes” and “Lifeboat,” the aging diva finds it difficult in this play to remember the words to a single line that needs to be re-recorded or “looped” for “Die, Die, My Darling.”
There is nothing subtle about LOOPED!  It’s off the charts hysterical in its deliciously ribald,  eye-opening unveiling of Tallulah’s final hurrah in show business. Amidst the laughter there is also a revelatory exposition – however brief – allowing us as audience to understand how her childhood development formed a basis for her adult behaviors. As an adult she was a free- spirited Hollywood actress with the reputation of a bad girl with a foul mouth, who unapologetically drank, smoked and did drugs. Her mother died after birthing her and she started smoking at the age of 9. Now she’s a sixty six-year-old woman, six months from death.
Who was it that said: “When she was good she was very good, but when she was bad she was Dahling!”
Christian Mast is brilliant as Danny Miller, the harried film editor who has been pressed into service to get Ms. Bankhead’s garbled line re-recorded (Looped) for an absent director.
Conservatively dressed and anxiously waiting for Life to happen to him, the contrast of Mast’s character with that of Ms. Persoff is striking. Mast’s monologue about his grief over a lost love is truly heartrending.
David Bond-Trimble anchors the show as Steve, the studio’s sound engineer. What could have been a throw-away part in the hands of a lesser actor is a hilarious dead pan success in his.
Luke Rahmsdorff-Terry’s sound design, echoing the diva’s words in a dramatic moment late in the play, creates an auditory embellishment, which in tandem with Steve Tangedal’s lighting, enhances the show immeasurably.
Susan Rahmsdorff-Terry’s costume design is spot on.
LOOPED is a raucous evening of exuberant laughter and the funniest comedy this reviewer has seen all year!
Not to be missed.Marlowe's Musings

Posted by David Marlowe Theatre Reviews at 7:14 AM No comments: