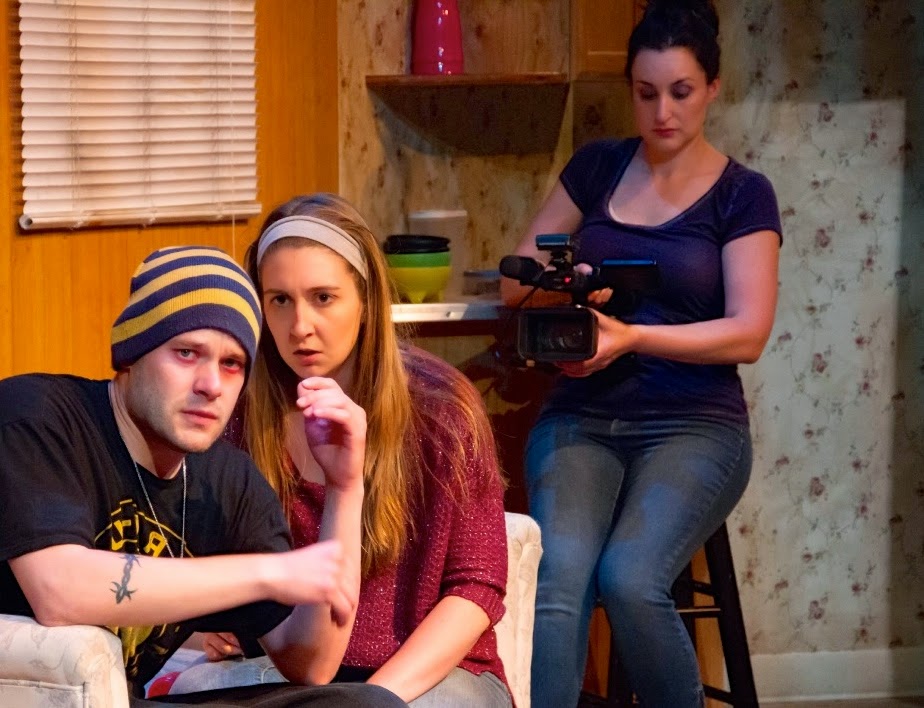 This was the first war that the nuclear family in America had been able to experience from a seat right in front of their television watching Vietnamese people be napalmed on the evening news and hearing Lyndon Johnson and then Richard Nixon talking about saving the world from Communism.
When our boys in uniform returned they returned to jeers of “Baby Killers!” They were not recognized as the good patriotic boys they had seemed marching off to war. They were not given parades as their fathers had upon returning from Europe and Japan. They were disinherited, disenfranchised, disowned. They were, like their fallen and dismembered brothers, our nation’s …buried children.
In 1979 Sam Shepard received the Pulitzer Prize for “Buried Child,” his play about the obliteration of the American Dream.

Shepard’s play, set in a “realistic” farm house in Illinois, holds the detached remnants of what may have once been a real American family with real American values. There are strokes of surrealism and of symbolism imbedded in Shepard’s script, which on a first glance may seem disconnected. However… they are not.
Rick Bernstein does yeoman’s service to Shepard’s American nightmare with superlative direction that elicits engaging performances from a very good cast.
Emma Messenger is powerful as Haley, a harridan of a matriarch who has emasculated her husband by committing incest with one of their sons and continues to humiliate him by openly having an affair with Father Dewis, their parish priest. Missy Moore portrays Shelly, the voice of reason in the play, who tries to find something beyond dysfunction in this family of lost souls. Ms Moore’s performance is nuanced in such a way as to understand why her work upon the stage is in constant demand.


As Tilden, the son who had sexual relations with Haley, Rob Kramer is appropriately dim and mentally absent.
Tim Fishbaugh gives us a mild-mannered, if somewhat deluded man of the cloth.
Brian Landis Folkins turns in a fine portrayal of Bradley that starts as a threat and ends up a whimper.
Dan Mundell does an admirable job of portraying the impotent, gravel-voiced patriarch.
Royce Roeswood is Vince, the son/grandson who, unrecognized, comes home from the war to the spiritual squalor of what once was home. Mr. Roeswood’s work in this production makes us feel the depth of rage with which playwright Shepard encoded his script.
This is a heavy hitter in all aspects. It's recommended for all lovers of dark serious drama with multiple layers and meanings.

Posted by David Marlowe Theatre Reviews at 6:45 PM No comments:

Even if that old time religion doesn’t figure into your favorite subject matter for a musical, you may find yourself falling in love with the strait-laced ladies who are stirring the pot in this Lutheran church basement. 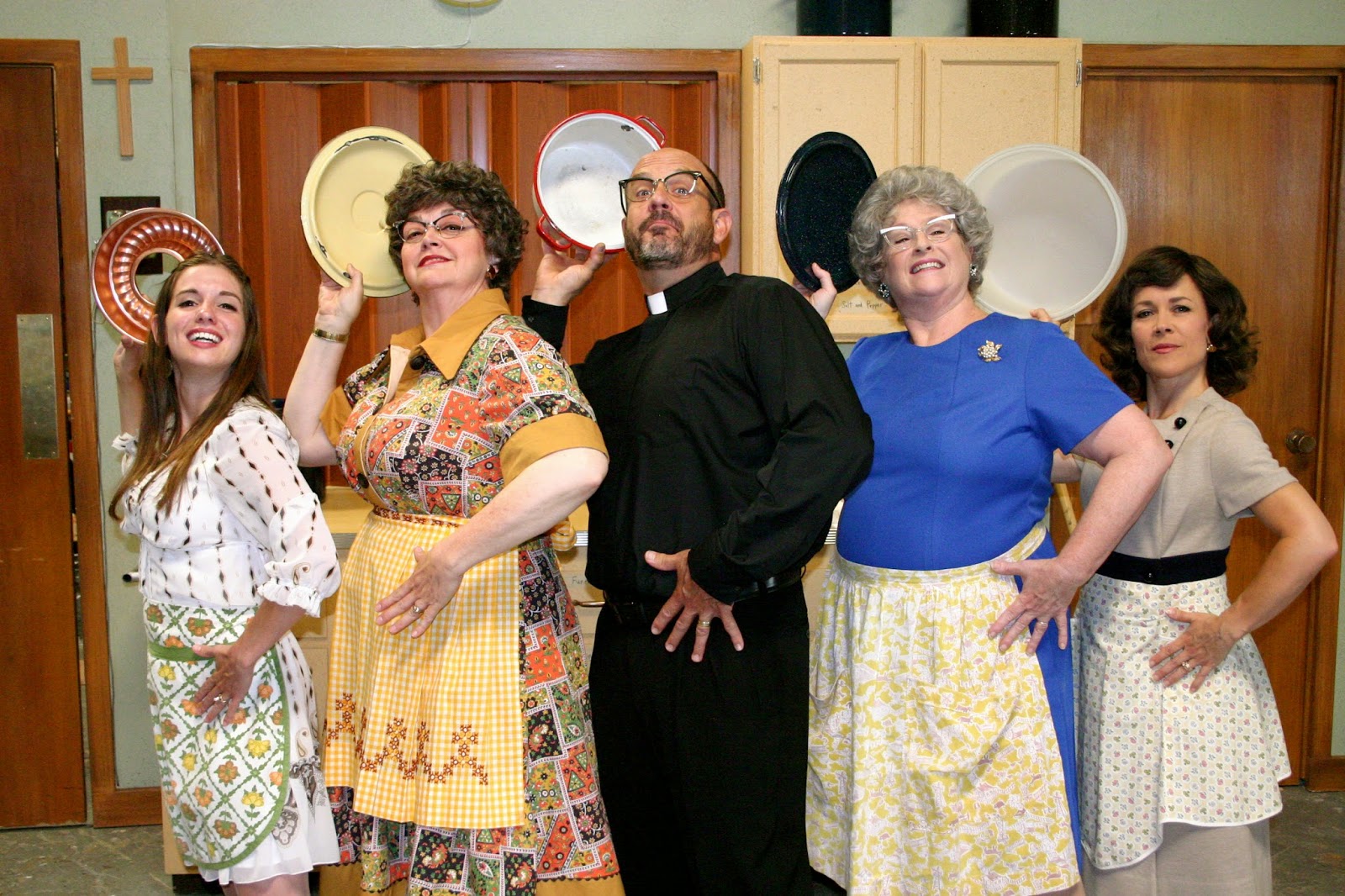 Frothy, fluffy and feather-weight, this “sequel to “The Church Basement Ladies” is a musical designed for a family crowd. On the night this reviewer was in attendance there were several church groups, which, from the sound of the guffaws, they must already be lying in wait for a “third helping.”

Although the cast is made up of a number of BDT Stage favorites, much of the plum schtick is ladled out to Barb Reeves (Vivian) and Bren. Eyestone Burron (Mavis).

When Eyestone. Burron is onstage it’s impossible to keep your eyes off of her. This actor is the Imogene Coca/Carol Burnett of Colorado theatre. Nearly all of her outrageous facial expressions send aftershocks of the convulsive variety through her seemingly unsuspecting physiology while eliciting gales of laughter from the audience.

In this installment of the CBLs however, it’s Ms. Reeves who gets the plum role. Her singing of “Vivian’s Bad Trip” to “The Cities” is a comedic wowzer. This artist's vocalization of Dennis Curley’s and Drew Jansen’s very funny song is made all the funnier by Reeves’ outrageous glissandos.

Sarah Grover (Beverly), who enchanted us all as Dorothy in BDT Stage’s “The Wizard of Oz,” finds out once again that coming home to love and affection is about as good as it gets.

Tracy Warren (Henry Award for her performance of the role of Irene Molloy for “Hello Dolly”) provides sparkle and warmth as Beverly’s mother.

Wayne Kennedy, who will play Tevye in BDT Stage’s “Fiddler on the Roof” next month, is a hoot as the pastor.

Music conductor Neal Dunfee accompanies the cast tinkling the ivories with his usual professionalism.
Jessica Hindsley did the amiable choreography.
The intentionally frumpy costume design is by Linda Morken.

There is a glossary of terms provided in the program for those who are unfamiliar with dishes such as Lutefisk and Rummegrot and “who don’t know how to speak Minnesotan.”

If you have any Lutheran friends or neighbors be sure to invite them. The jokes stem mainly from a down-home take on old-fashioned religious faith peppered with a mildly self-deprecating Scandinavian flavor.


BDT Stage is the new name for what for 37 years has been  known as Boulder’s Dinner Theatre. It’s located at 5501 Arapahoe Avenue in Boulder


For tickets call the box office at 303-449-6000Marlowe's Musings
Posted by David Marlowe Theatre Reviews at 5:07 PM No comments: 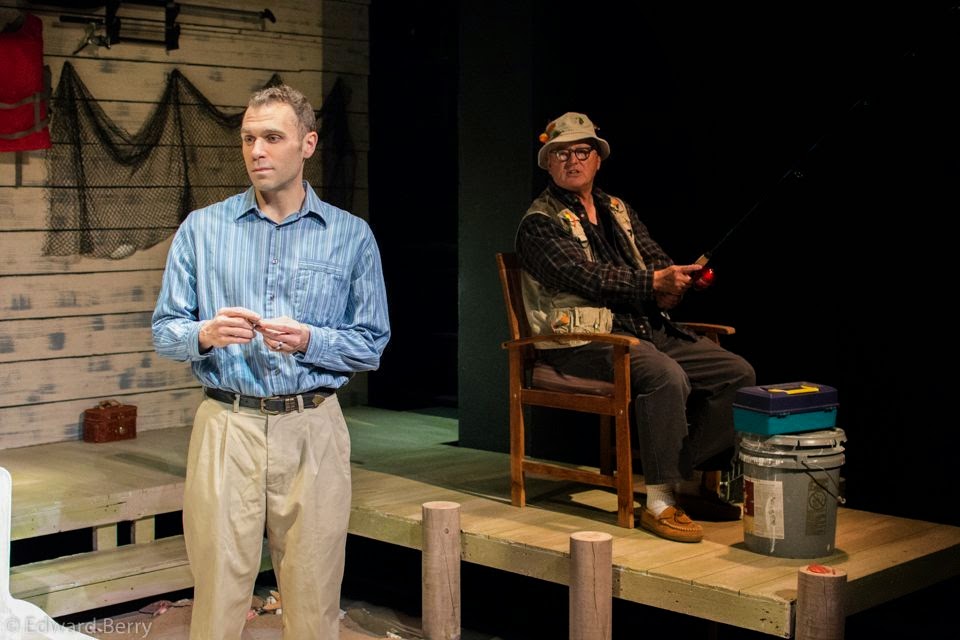 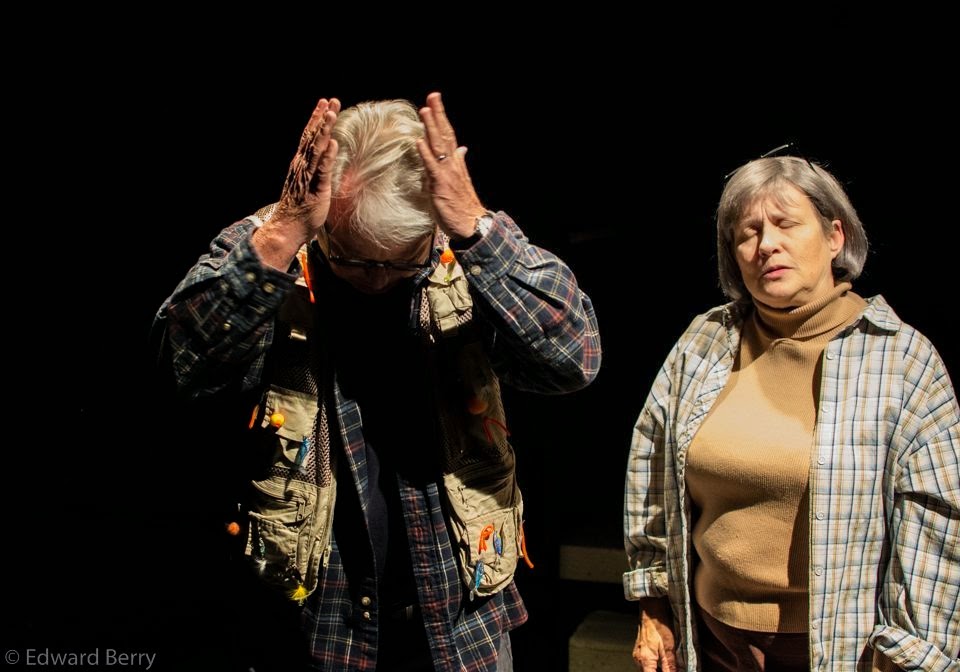 Posted by David Marlowe Theatre Reviews at 8:13 PM No comments: 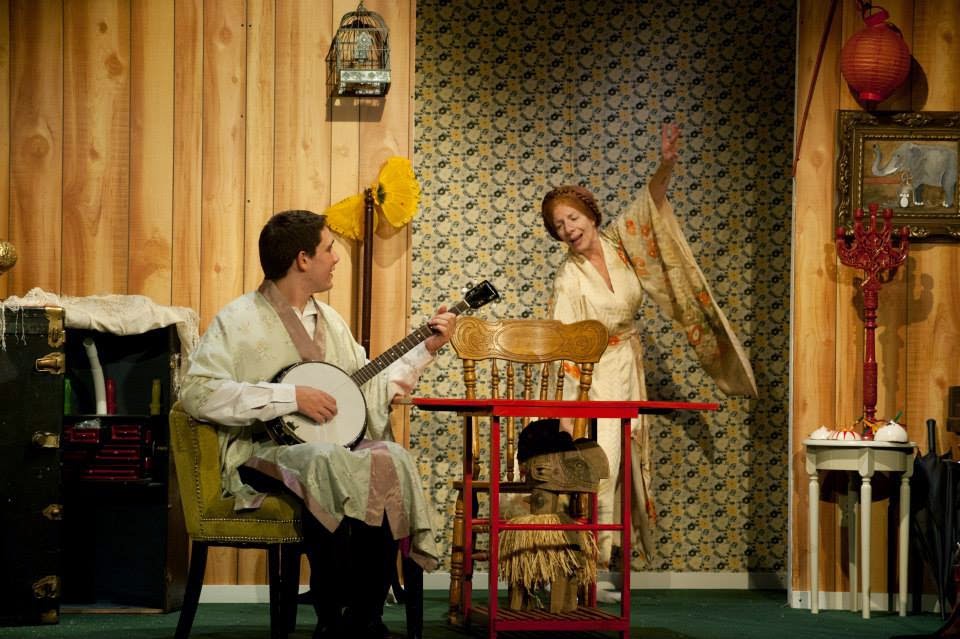 The wait is over! “Harold and Maude” is now on view at Vintage Theatre. Based upon the screenplay of the cult favorite 1971 movie, Colin Higgins’ stage adaptation is both poignant and funny.
Director Pam Clifton has done a superb job bringing this show - full of daunting special effects - to the stage. Clifton elicits strong, affectionately drawn performances from a well-chosen cast and paces the show at an appropriately casual clip that allows us to savor the delicious moments that arrive regularly in this dark romantic comedy.
Deborah Persoff (“Grey Gardens” and “The Lyons”) plays Maude with a vital earthy vigor that is endearing. Persoff imbues Maude with a palpable inner warmth that’s luminous. Jose Zuniga is Harold, a manically depressed young man whose obsession with death leads him to attend the funerals of complete strangers. It’s at one of these memorial services that Harold meets Maude. Zuniga, who was critically acclaimed for his portrayal of Alan Strang in the Vintage Theatre production of “Equus,” succeeds wonderfully enacting the passive aggressive behaviors of Harold. His journey from morbidity to joie de vivre is heart opening! 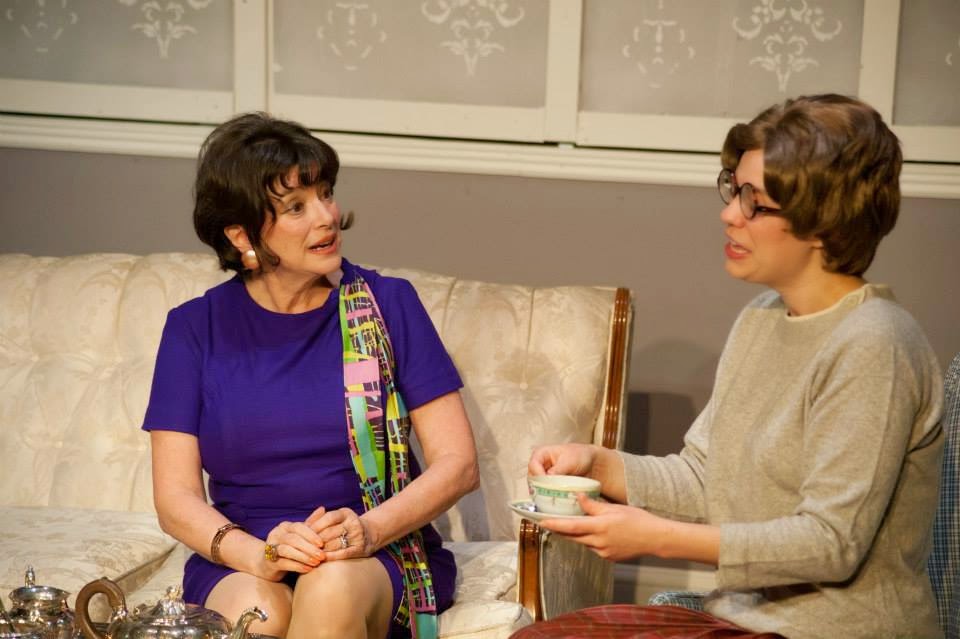 Sheri Right plays Harold’s mother Helen with a smooth self-absorbed nonchalance that makes us see why her son is acting out. Elegantly dressed in Christine Samar’s wardrobe design, Right tries to get Harold interested in three young women from the dating service - all played with consummate skill by Samara Bridwell.
The piggyback set by Douglas Clarke is thoroughly well designed allowing us entrance to Maude’s home above and Harold’s mother’s house below.
Sonsharae Tull plays Marie, a housemaid who becomes increasingly unnerved by Harold’s morbid vignettes. Ms. Tull is aided in no small part by the increasingly “freaked out” wigs created by Megan O’Connor.
Joey Wishnia is Father Finnegan, a priest who, while unable to condone Harold’s ‘eccentricities,’ reveals more about himself than his beliefs about life, in a speech that, while somewhat brief, brings gales of laughter from the audience.
Joseph Wilson is Dr. Matthews, the psychoanalyst who tries to cure Harold. The therapy scene in which Harold mirrors the doctor’s body language is hilarious.
Lynn Nicholson’s Inspector Bernard is the voice of social conformity. His adherence to what the consensus believes to be common sense provides exaggerated contrast to Maude’s outrageously openhearted approach to life.
Vintage Theatre presents
“Harold and Maude”
Oct. 3 - Nov. 8*
Fri/Sat at 7:30 p.m.; Sun at 2:30 p.m.; Thurs. Nov. 6 @ 7:30 p.m.; Sat., Nov. 8 @ 2:30 p.m.
$26 ($21 advance); Groups of 6+ $18 303-856-7830 or online at www.vintagetheatre.com
Vintage Theatre, 1468 Dayton St., Aurora 80010
*Please note Date Change from (Oct 17 - Nov 16)Marlowe's Musings


Posted by David Marlowe Theatre Reviews at 8:56 PM No comments: