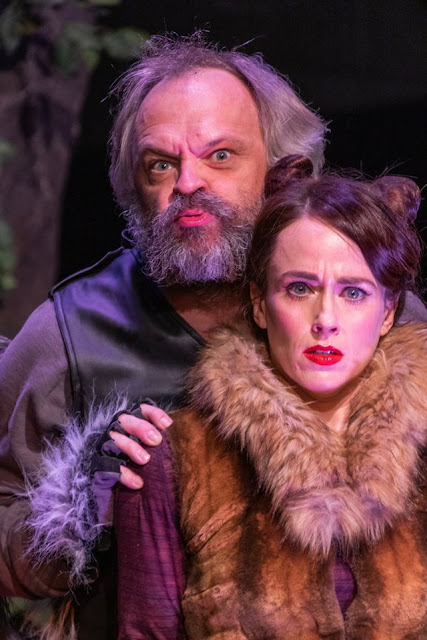 Upon entering the auditorium of the Black Box Theater over at Aurora Fox Arts Center one is regaled with a breathtaking tree that sprawls out, reaches above and even wraps around part of the playing space. This magnificent tree (quasi forest) has been created by Technical Director and Scenic Designer Brandon Philip Case. For this reason alone one might suggest you hurry to get a ticket.
Jen Orf’s superb lighting design in tandem with Jason Ducat’s amazing sound design create a magic all on their own. Nicole M. Harrison’s furry costume design is delightfully spot on.
Director Missy Moore has assembled a fine cast to create her vision of Robert Askins’ THE SQUIRRELS.
Stitched together by the amazing acting talents of Andrew Uhlenhopp as a goofy scientist who narrates the show, while also playing a squirrel named Sciuridae, this dark comic allegory touches on numerous topics. Among these are: sexism, classism and bigotry of every hue. And, yes, it also comments upon disregard for the animals and environment.
There are some lovely performances in this apocalyptic comedy. Glamorous Kelly Uhlenhopp is most memorable as matriarch Mammalia. Her biomimetic stage movements and squirrel chittering astound.  Rachel Turner turns in a thoroughly enjoyable performance as Rodentia. This actor’s ability to transform herself into a squirrel physiologically squeaking, is amazing.  Leinie Rigg(Chordata), Joshua Levy(Scurius) and Hossein Forouzandeh(Carolinensis) round out this cast of tail swishing tree rodents.
It’s the Grey squirrels vs. the Fox Squirrels in an only slightly veiled comparison to the human race.
There are a lot of nuts in this show so please take this reviewer’s opinion with a grain of salt. 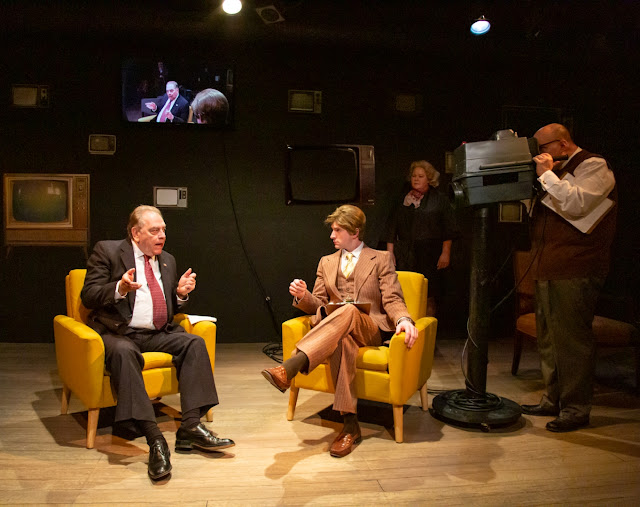 On May 4, 1977,  millions of Americans watched an interview in which ex-president Nixon hoped to exonerate himself from the stigma of Watergate.  Mr. Nixon hoped that British television personality, David Frost would be the perfect interviewer to allow him to be forgiven by the American people.
Politically speaking, could there be a more timely theatre production? I don't think so.
Remembering watching the news over our tv trays in the seventies and stressing about Watergate is not so very different from our distress at seeing the news of Trumpgate now.
Director Craig Bond is to be lauded for his awareness of what it is that his audience needs.
Catharsis.
In other words we’re all so bound up by the horrors of this presidential administration that we have a need to release the pressure cooker of anxiety.
In this case I would call Mr. Bond’s production of Peter Morgan’s drama FROST/NIXON as much psychological therapy as theatre. Those of us old enough to remember the overwhelm of the Watergate scandal, find ourselves once again depressed and mentally, emotionally and spiritually drained due to the constant flow of lies, bigotry and disregard of our constitution and our laws. Those of us who are too young to remember are learning how devastating this can be for the first time.
It’s a daunting task to put such a large cast and all the various locations against which these historical events transpired upon the intimacy of the Bond-Trimble Theatre. Nevertheless…director Bond’s skill in moving these actors – most of whom were new to this reviewer – both swiftly and gracefully into their various vignettes - is striking.
The scenic design by Brian Miller never lets us forget that we are watching politics in the age of the television. With Miller's backdrop peppered with images of the small screen one can almost hear Marshall McLuhan, the media prophet of the time, saying: “The medium is the message.” Miller gives us media meeting rooms, presidential offices and a television studio, not to mention the interior of an airplane in flight. Rick Reid’s sound design puts us right up there with remarkable sonic atmosphere. Bond’s direction of a flight attendant thanking passengers for flying with his company has just the right low-level drone.

Scott Gaines gives a portrayal of British talk show host, David Frost that alternates from cool celebrity arrogance to a barely subdued wire-taut tension. Both Frost's job and fortune were on the line with this adventure.
It is, however, Dennis Berkfeldt, who steals the show.  The mannerisms of Nixon are all there. From the jowl-shaking to the finger wagging to the perfectly mimicked speech to the wiping of sweat from brow and upper lip.  Being an expert at all the memorable behavioral patterns of Tricky Dicky - Mr. Berkfeldt shines.
When I awoke the morning after the show, I felt as though all the steam had gone out of my political pressure cooker. However... I know that as soon as I open News on the internet or watch it on tee vee, it will start to build again. We may all need to see the show multiple times.

Posted by David Marlowe Theatre Reviews at 12:44 PM No comments: