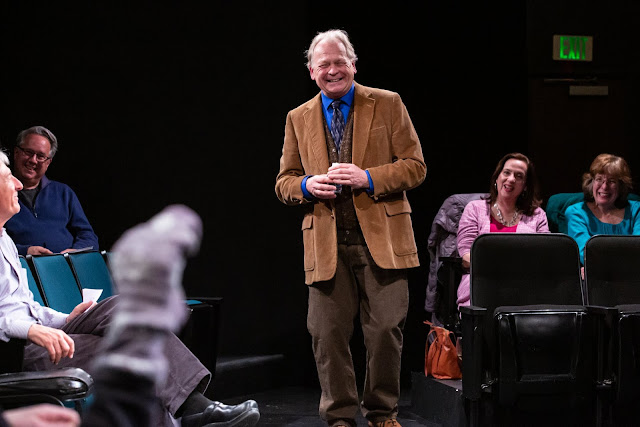 John Ashton as the Narrator

“Every Brilliant Thing” is a play about a boy whose depression after his mother’s attempted suicide leads him to start to write a list of all the wonderful things that make life worth living as a gift for her.
As he grows up we see the list grow through happy times and sad, love found and love lost.  Although there are some sad moments, there are also a lot of smiles and laughter. (Be assured that this is not a maudlin tear-jerker.)
John Ashton is the Narrator of this show, and anyone who has ever seen this actor onstage, knows that he/she is in for an unforgettable evening of great theatre.
Showcasing Ashton’s charismatic humor and unabashed empathy, Peter J. Hughes directs the proceedings with a deft hand.
To say that the show is interactive is to overstate the obvious. It’s about as close to a conversation between actor and playgoer as there will ever be. Upon entering, audience members receive numbered cards imprinted with words or short phrases which they read aloud when their number is called. “Really good oranges,” “birdsong,” “watching little kids learn to use chopsticks.”
There is very gentle, and very enjoyable audience participation in this show.
Ashton’s gift for theatre allows for an easy joyful interaction for each and all. This reviewer and another audience member held a keyboard aloft so Ashton could add some musical notes to the conversation.
In the newly reconfigured Bond-Trimble Auditorium this poignant piece becomes more than intimate. Now it’s an all-inclusive circle creating what feels like a truly safe space for this heart opening experience.
In the capable hands of Ashton and Vintage Theatre’s production team, Duncan MacMillan’s and Jonny Donahue’s touching play about one man’s struggle with mental illness becomes an indelible evening of theatre.Marlowe's Musings

Posted by David Marlowe Theatre Reviews at 5:15 PM No comments:

THE PLAY THAT GOES WRONG
THE BUELL THEATRE: March 5 -17 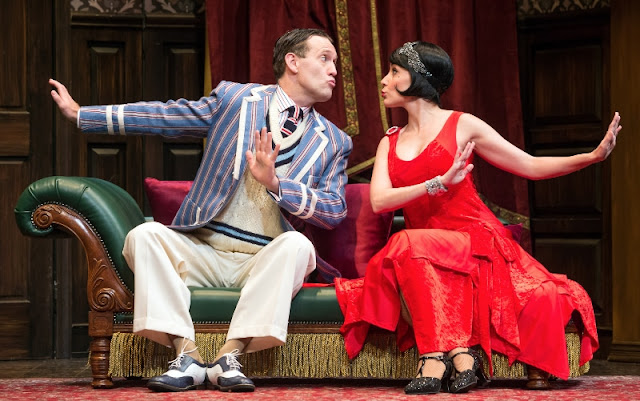 Having received the 2015 Olivier Award for Best New Comedy in London, THE PLAY THAT GOES WRONG got the 2017 Tony Award for Best Scenic Design.  When you see Nigel Hook's ingenious set - actually the antagonist of the piece - you will understand why!
A fictitious theatre company known as The Cornley Polytechnic Drama Society has received a sizeable donation and decided to do a production of an equally fictitious 1920s murder mystery entitled “The Murder at Haversham Manor.”
It’s opening night for their show, and the play is plagued with non-stop, all night disaster.
Missed entrances, forgotten lines and technical mishaps are just a few of the countless occurrences that make up this merry and manic mayhem.
Jamie Ann Romero, star of countless Colorado productions, dazzles us with her comedic brilliance as Sandra Wilkinson, who plays Florence Colleymoore in the play within the play.
The show is so funny that one can hardly recover from one episode of gasping for breath before he/she’s doubled over with laughter again.
Written by Henry Lewis, Jonathan Sayer and Henry Shields, the show is an Absolute Riot! It  would be unfair to give any spoilers.
Just go and be dazzled by Jamie Ann Romero, Brandon J. Ellis, Evan Alexander Smith, Yaegel T. Welch, Peyton Crim, Scott Cote, Ned Noyes and Angela Grovey.
Each and all proved capable of turning a sold out opening night audience at The Buell Theatre into a pack of laughing hyenas.

Not to be missed.Marlowe's Musings

or go ONLINE at DENVERCENTER.ORG

Posted by David Marlowe Theatre Reviews at 4:46 PM No comments: