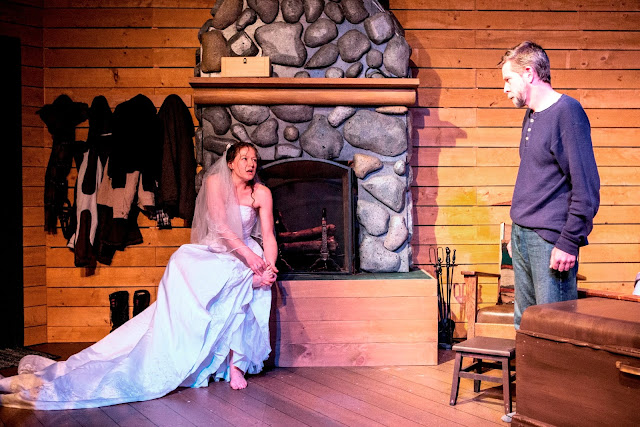 If you missed Vintage Theatre’s first production of “Brilliant Traces” at their old space on 17th Avenue you’ve just been given a second chance to see it. Playwright Cindy Lou Johnson gives us a hopeful and quirky off-beat comedy that presents us with two lovable neurotic human beings. In the playwright’s words “these two remind us of the beauty of the scars that we can feel as we crash through this life.”
In the silence that precedes the play’s action we observe the solitude of a lonely man in a secluded cabin in the Alaskan woods.
A runaway bride arrives at the cabin in a blizzard. She downs a few shots of whisky and then faints. The occupant of the cabin is a reclusive man who prefers/requires a solitary existence. Tenderly bathing her frostbitten limbs with warm water and putting her safely to bed, the stage is set for an evening of emotional breakthroughs. Christian Mast’s realistic take on Henry gives us a man mired in guilty memories. Maggy Stacy’s Rosannah has her own awkward emotional baggage which she unloads with a ferocity that’s spellbinding. Both characters are running away from Life.
Sparked by a compassionate connection and intimate exchanges of disinterred guilty memories, the power of self-forgiveness leads towards redemption. But the healing has just begun.
Director Bond’s transparent direction elicits performances from his two actors that smolder with passion. Ms. Stacy and Mr. Mast will continue to work their magic on theatregoers long after they’ve left the theatre.
This evening of theatre provides a warm elixir delivering hope and balance in this time of confusion and paradox and  proving that redemptive and heartfelt love can be a healing balm for buried grief and regret.
Director Craig Bond also designed the set with timbers, snow and a crackling fireplace.Marlowe's Musings

Posted by David Marlowe Theatre Reviews at 4:34 PM No comments: 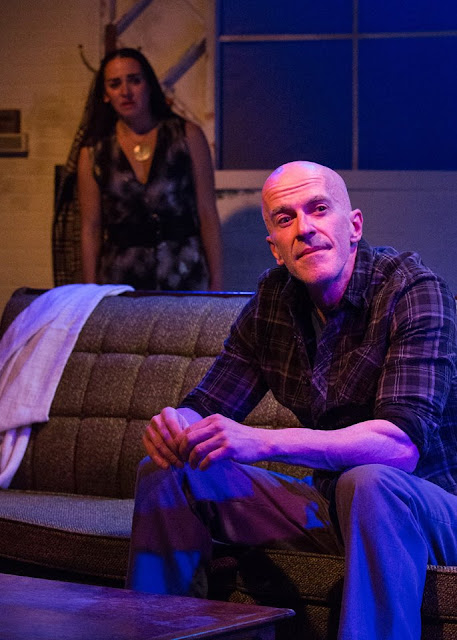 L-R: Karen Slack and William Hahn
Written by Lanford Wilson, “Burn This” appeared off Broadway in 1986.  It featured Joan Allen and John Malkovich.
Ms. Allen received the Tony for her performance as Anna.
After their roommate Robbie and his lover die in a boating accident, Anna and Larry, her other gay roommate, attempt to comfort each other.
When Pale, Robbie’s coke-snorting brother explodes onto the stage, things become more than a little bit chaotic, causing Anna’s longtime lover Burton to reassess their relationship.
Director Warren Sherrill, who also created the scenic design describing Anna’s seedy Bohemian apartment, has cast the show impeccably.
Bill Hahn is one of the most watchable actors in town. He can take us from laughter to tears on a dime.
Anyone who saw this artist’s Henry Award-winning performance in Curious Theatre Company’s “Frozen” knows exactly how intense and riveting he can be.
Ms. Slack proves once again that she is one of our most accomplished dramatic actors. Her artistry in the one-woman show, “The Syringa Tree,” Curious Theatre’s “God of Carnage” (Marlowe Award) and her portrayal of Frida Kahlo in Melissa McCarl’s “Painted Bread” are just a few of her many stunning performances.
Genuinely funny in some scenes, Drew Horwitz portrays Anna’s gay roommate, Larry with caring compassion.
John Jankow performs the part of Anna’s lover, Burton with a one note, self-absorbed narcissism, of which the playwright would thoroughly approve.
Lanford Wilson has created some fascinating characters, but don’t expect any tidy conclusion.

Posted by David Marlowe Theatre Reviews at 8:46 PM No comments: 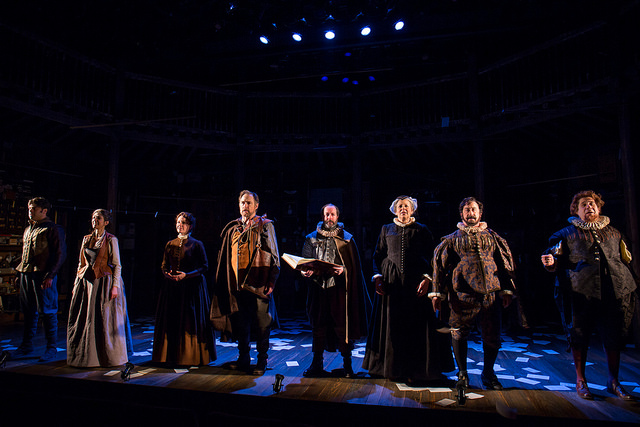 The cast of The Book of Will

Currently on view at The Ricketson Theatre, Lauren Gunderson’s play, “The Book of Will,” comes with high recommendations from this critic’s desk.
Ostensibly the play touches on the creation of The First Folio of Shakespeare’s plays. It’s framed in the loves and losses of the Bard’s closest friends in the theatre as they work to secure his legacy for the future.
Liam Craig and Kurt Rhoads portray John Heminges and Henry Condell respectively. While both men do a superb job creating their characters, they are overshadowed by the bombastic work of Triney Sandoval. This actor portrays not only Richard Burbage, but also Ben Jonson. His no holds Bard (sorry!) performance(s) in both roles are potent in the sense that Mr. Sandoval is something of an onstage tornado as an actor. His bellowing, blustery potency is staggering in more ways than one.
The women who portray the wives and daughter of Heminges and Condell: Nance Williamson, Miriam A. Laube and Jennifer Le Blanc respectively, are all superb actors.  Ms. Laube has a spicy, sassy expressiveness that is utterly delicious.
Playing several roles in the ensemble, Thaddeus Fitzpatrick is a young artist with great talent and vigor. One hopes to see him onstage again soon.
Andy Nagraj is another star in the making who’s most memorable as Isaac Jaggard, the man who finally got the printing done!
Rodney Lizcano is hilarious in various supporting roles.
Director Davis McCallum can be credited with great casting and pacing.
The scenic design is a visual wonder of composition. Its upper level references the look of the old Globe Theatre. Tis a puzzlement that it’s never used.
At one point in the play certain parts of the scenic design magically disappear in such a way as to make the grinding gears of a Gutenberg press visible.
One wishes that the artistry of the technical crew could have also made all those fragments of Will’s
scripts hanging above the stage in ancient English text come together as the first page of Hamlet or King Lear or some other work. Pericles? But instead they retreat all at once and we get a deluge of flying blank sheets of paper. It works…sort of, but here was one of those missed opportunities that could have made the production indelible.
If the man from Stratford did write the plays in the First Folio it’s interesting that there is no mention of his plays and no bequeathing thereof in any form in his will . Only a few things such as his bestowing his “second best bed” and "a silver bowl" on members of the family? Odd thing for a writer, don't you think?
Could it be possible that the man from Stratford didn’t write the Canon after all? (Check out “Marlowe’s Ghost” by Daryl Pinksen.)
Just sayin.’

Posted by David Marlowe Theatre Reviews at 7:34 PM No comments: