How To Sing While Ugly Crying 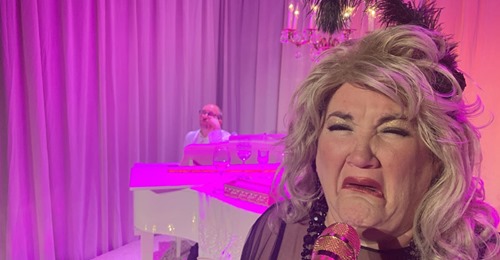 Hannah Duggan with Nathan Hall at the piano

Buntport Theater Company’s 49th full-length original play, “Cabaret De Profundis or How To Sing While Ugly Crying,” was supposed to open last March in their space over at 8th and Lipan. Like the other theaters in town, Buntport’s doors were closed at that time due to the pandemic.

Lucky for us the award-winning troupe has filmed the stage production so we can all see this cabaret-style show streamed in the safety of our own living rooms.

Comic genius Hannah Duggan plays Artemisia II, Queen of Caria. She’s that lady who commissioned the building of the Mausoleum at Halicarnassus, one of the seven wonders of the ancient world, back in 350 BC. She’s also known to have mourned her “bruhsband,” (brother/husband) Mausolus’ death by drinking his ashes in her wine.

Identifying with the stages of grief outlined by Elisabeth Kubler-Ross, the actor bemoans the fact that she has become “the Queen of Grief, the Madame of Misery, the Diva of Distress.”

Duggan is a brilliant actor, whose performance is as endearing as it is hilarious. Able to turn on a dime from hysterically grieving widow to zany little girl, her blissfully naughty grins will enchant you.

The show also features Nathan Hall, who, outfitted in a dashing white tux, accompanies Ms. Duggan on the gorgeous white grand piano with a mix of old standards and new compositions. The deadpan Nathan also serves as the butt of many of Ms. Duggan’s sly jokes.

This monologue with musical numbers is being described as “a dark comedy with the emphasis on comedy.”

The scenic design and its accompanying lighting design are eye-pleasing indeed.

Ms. Duggan’s costumes dazzle us with their eye-popping sparkle and shimmer.

True, the piece could be improved by a small trip to the editing room.

Nevertheless … this is a welcome gift in this time of shuttered theatres and house-bound theatregoers.

Just FYI the production’s sound recording, and visuals are of the highest quality imaginable. Bravo!

The show will be released on Vimeo on January 15th.

Or go online at buntport.com

Posted by David Marlowe Theatre Reviews at 9:06 AM No comments: