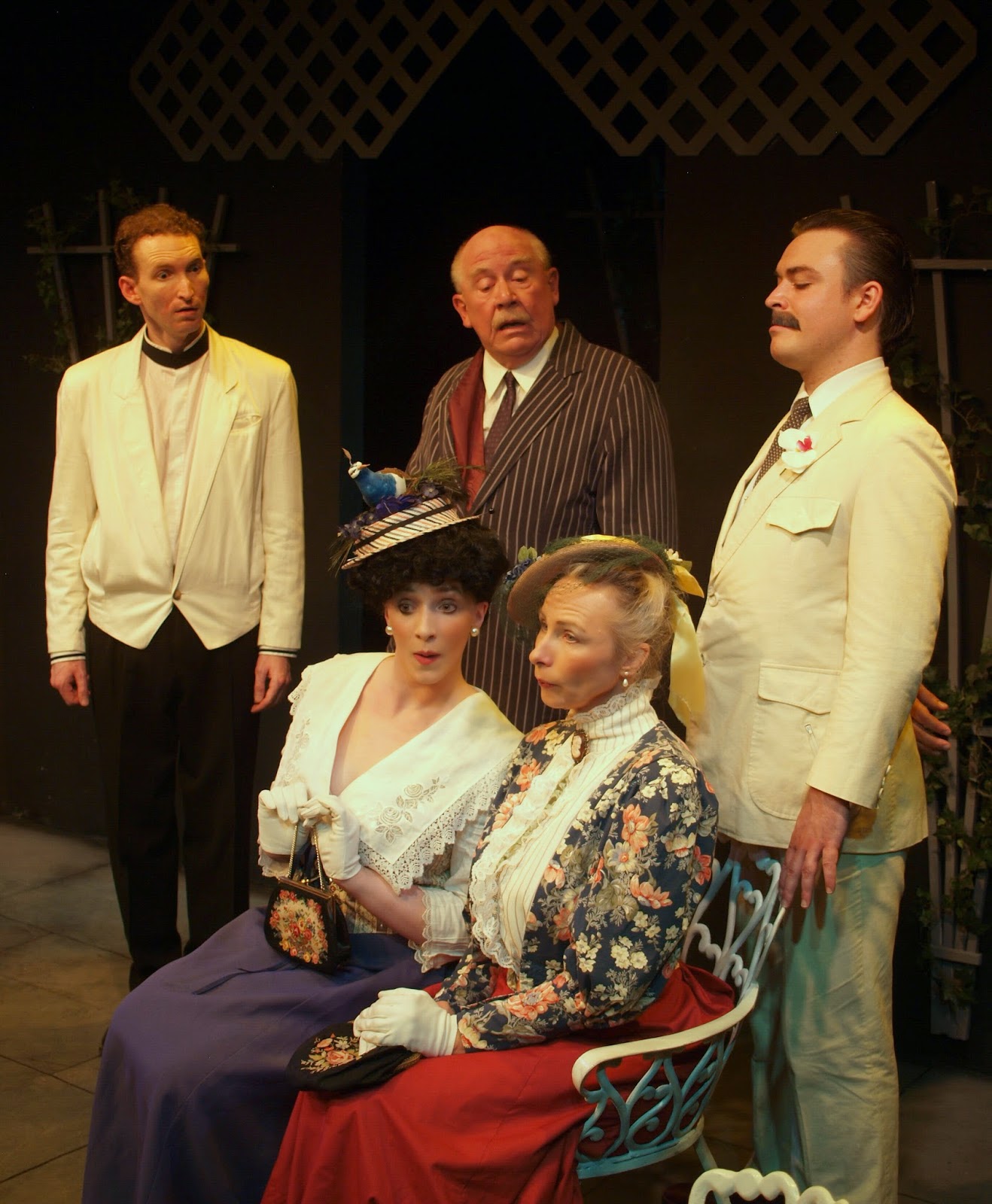 Henry Award winner Seth Caikowski has been cast in the role of Shrek, the lonely ogre. 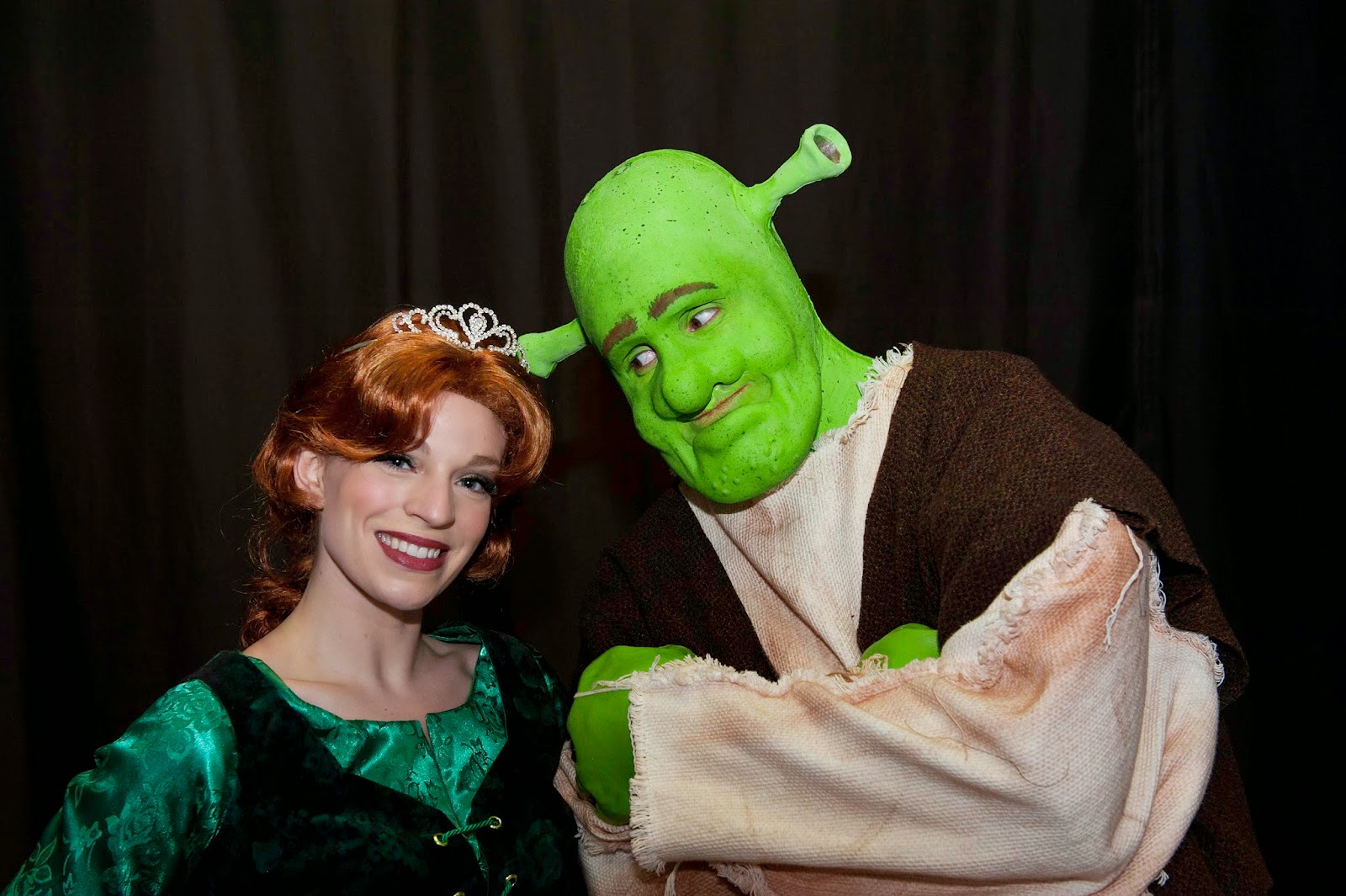 Tyrell Rae is a hoot as Shrek’s side-kick, Donkey - the role voiced by Eddie Murphy in the film.
The evening on which this reviewer was in attendance found the talented Norell Moore recovering from strained vocal chords. Rebekah Ortiz stood in for her and did a great job as the princess,Fiona.

Scott Severtson is OUTSTANDING as the diminutive Lord Farquaad. Severtson provides the exact right over compensation for his character’s short stature with a Napoleon Complex, by exhibiting a bossy self- aggrandizement and love of white horses that is a stitch throughout!
Brett Ambler is hilarious in the role of Pinocchio!
Matthew D. Peters directs and choreographs this whimsical family-friendly show.
Todd Debreceni does masterful  work on Shrek’s (Seth Caikowski’s) green cranium and Pinocchio’s (Brett Amber’s) ever-growing nose. No lie!(Sorry!)
The Dragon, which was created by Cory Gilstrap of Imagined Creations, is a show-stopper. It’s a stupendous creative achievement. Bravo! 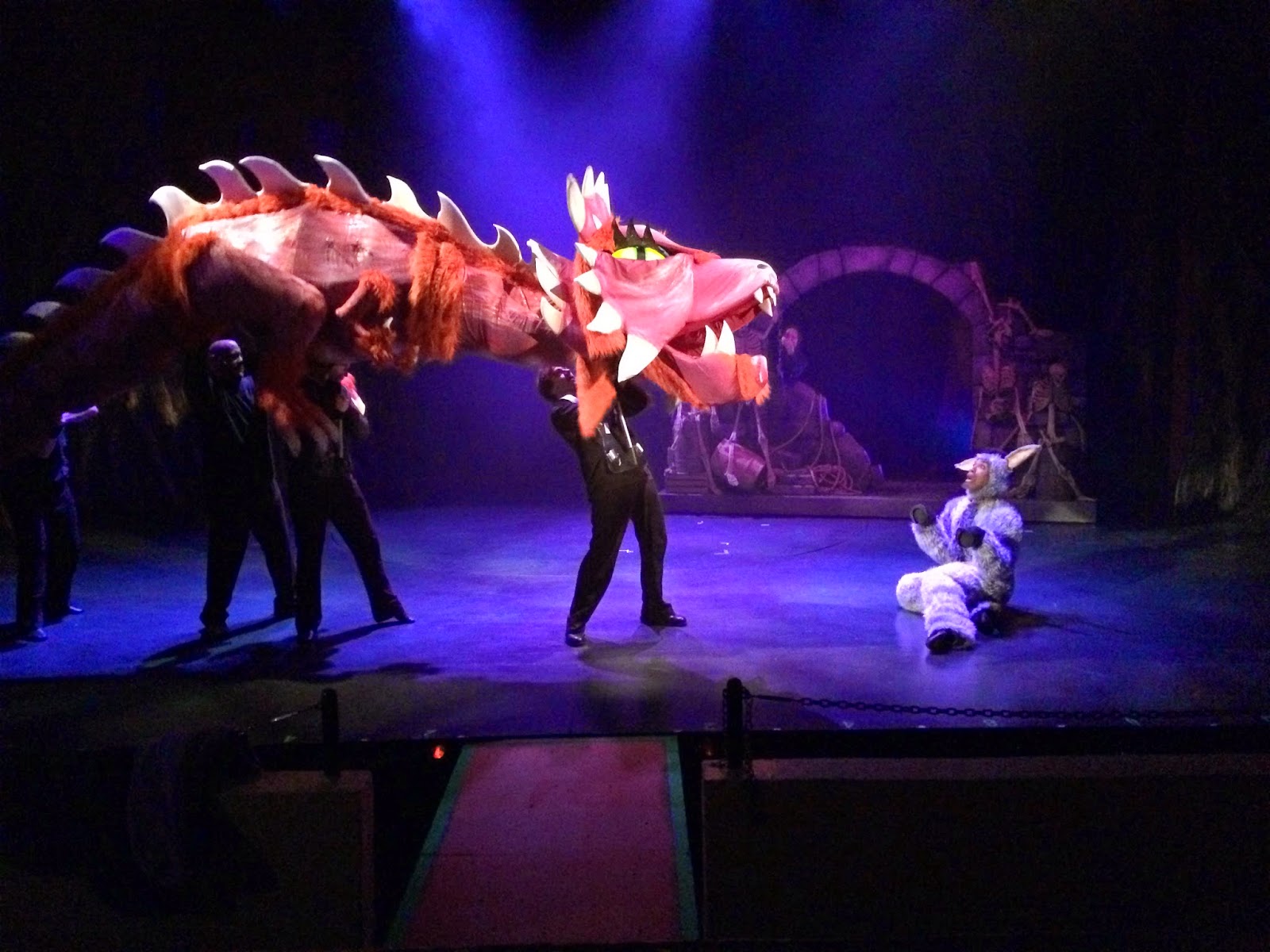 Amanda Earls voices the dragon with a fiery exuberance that makes one wish she were onstage much more often.
Joanie Brosseau gets to sing but little in this show. When she does it is the auditory nectar of the gods.
Adam Paul, Scott Beyette, Wayne Kennedy, Tracy Warren, Jessica Hindsley and Rae Klapperich are all wonderful as blind mice, little pigs and other dis'grunt'led fairy tale critters.
Linda Morken’s costume design dazzles. The stunning red dragon gown worn by Amanda Earls in the final number of the show is one of the best to have been seen in recent seasons.
Amy Campion’s glorious set design is outrageously well conceived and constructed.  Set pieces, props and special effects such as exploding birds are all home grown - and home-exploded - at BDT … and they are wonderful!
With the difficult task of turning a score that’s an ogre’s ear into a silk verse Neal Dunfee and his superb Boulder’s Dinner Theatre orchestra score big time!
Wayne Kennedy’s sound design is simply amazing. We as audience hear the characters' thoughts being voiced above us, behind us and across the room in a coup this reviewer has never experienced in any theatre.
One has to recommend that the other local sound designers attend and pay close attention to this astounding work. ("Obi Wan has taught you well, but now Wayne is the Master!")


For tickets go online at Bouldersdinnertheatre.com or call 303-449-6000Marlowe's Musings
Posted by David Marlowe Theatre Reviews at 12:56 PM No comments: 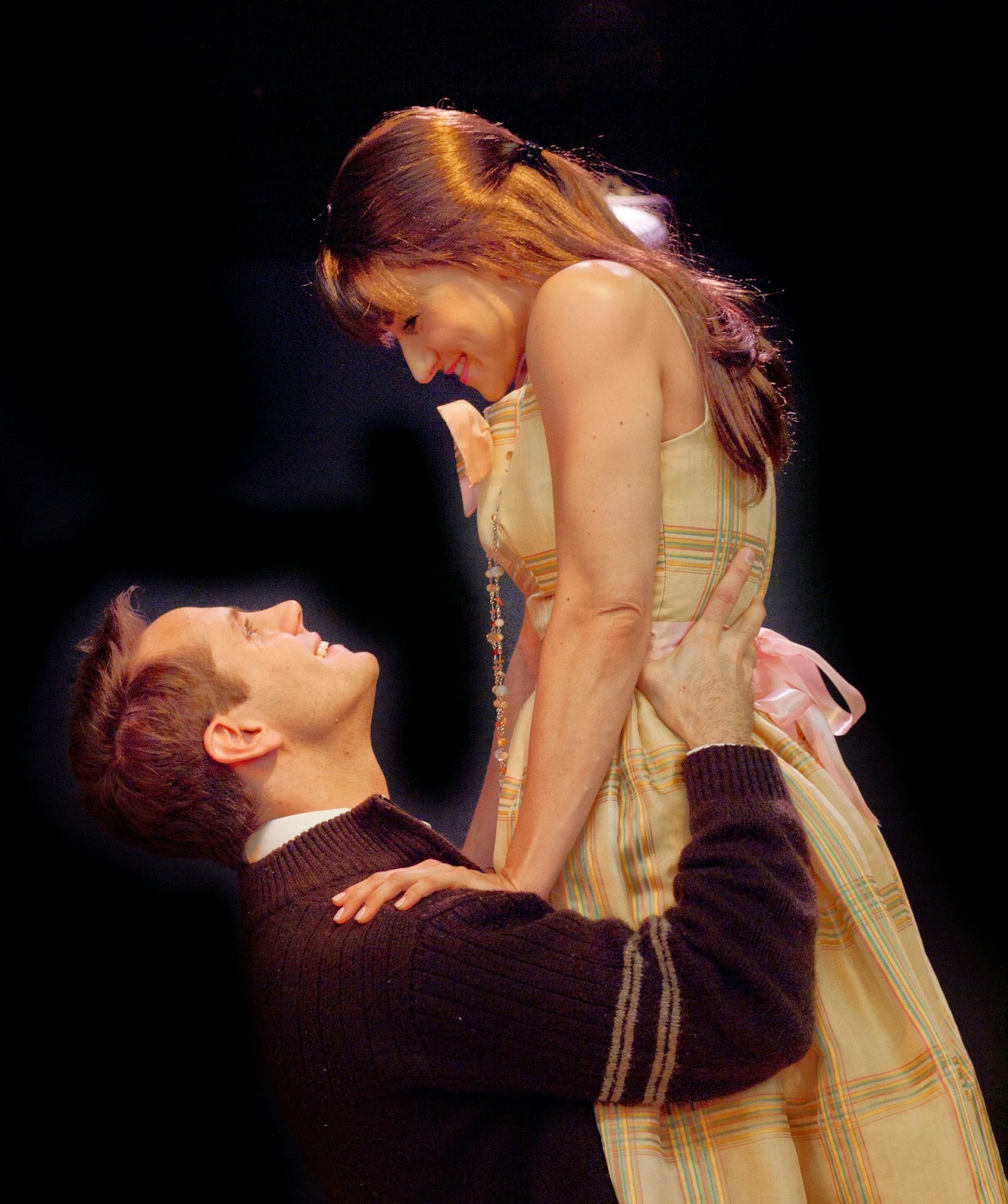 It is my great hope that lots of local producers will see this exquisite production and that they will cast these artists in LOTS of upcoming shows. The Colorado audience deserves to be ravished by this kind of magical artistry.
Brenda Billings' direction of "THE FANTASTICKS" for Miners Alley Playhouse is outstanding!  Her casting is impeccable.
Mark Lively(Matt), Jacquie Jo Billings(Luisa) and Rory Pierce(El Gallo) provide us with vocals that are magnificent. Mr. Lively's electrifying performance of "I Can See It" will lift you right out of your seat! BRAVO! 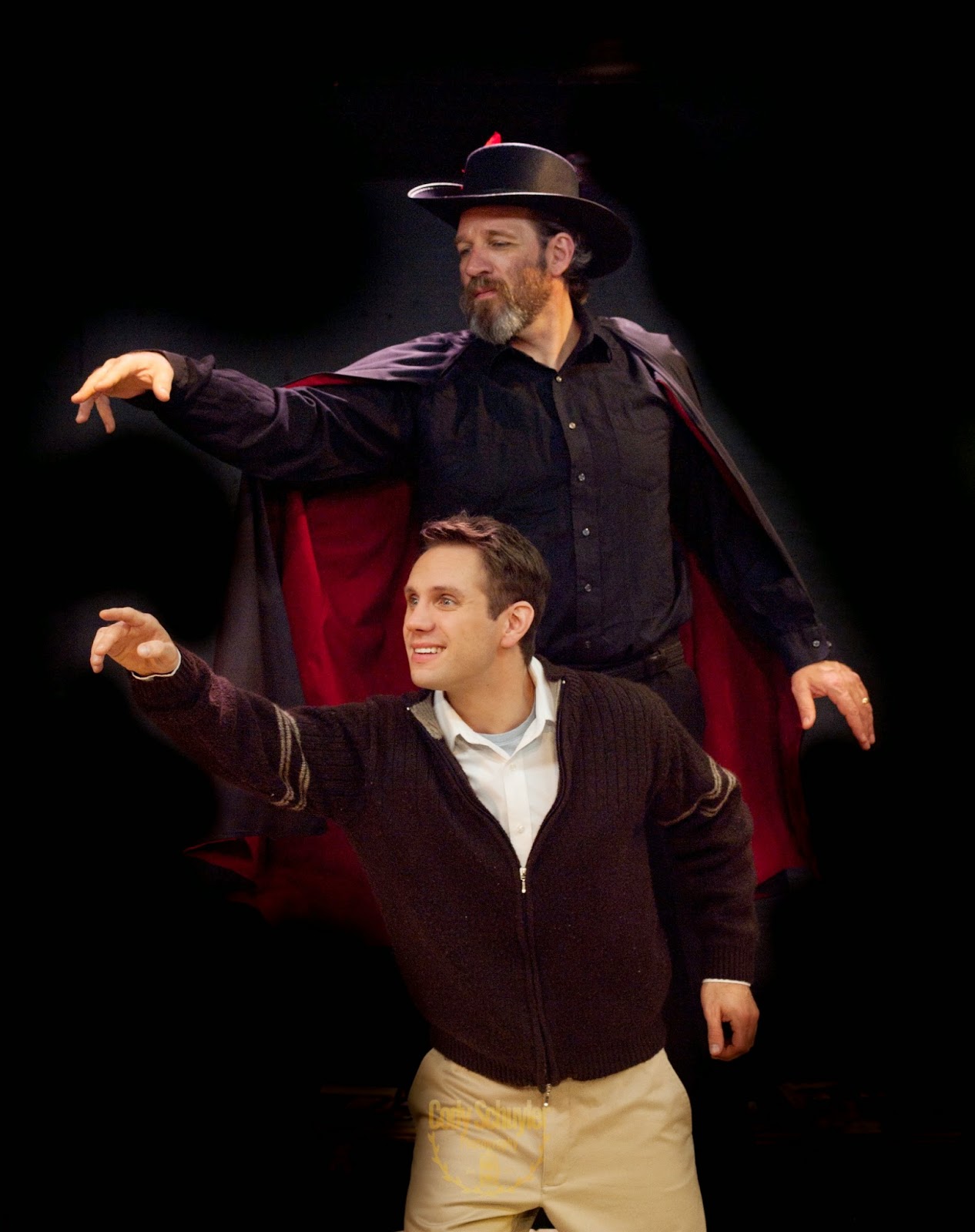 Jacquie Jo Billings has a soprano that is quite simply one of the best in the region. Mr. Pierce needs to be cast in LOTS more musicals. His acting and singing of the part of El Gallo stuns! 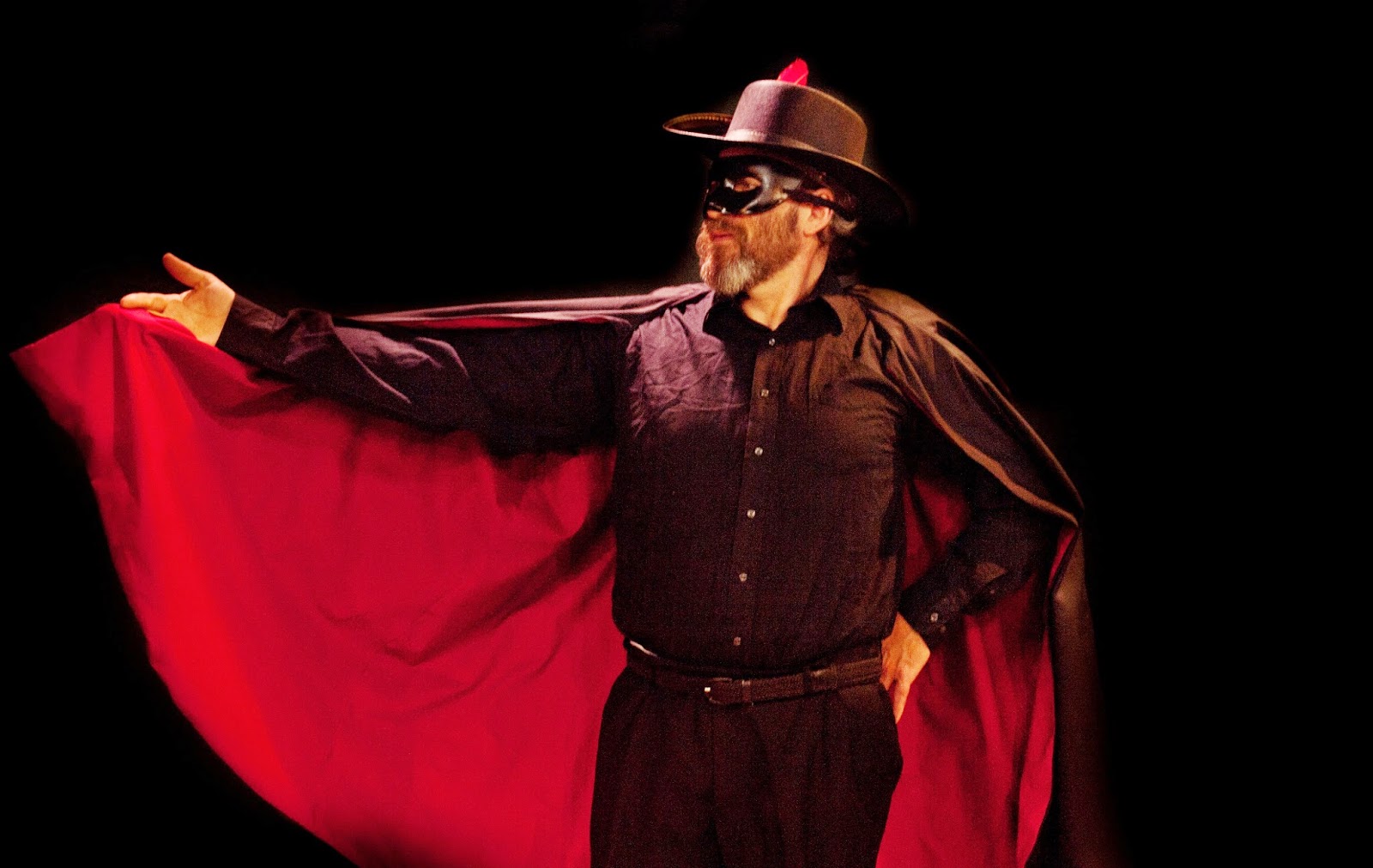 The fathers, the old actor, the man who dies and the mute are brought to life by some truly fine artists. They are: Tim Fishbaugh, Steve Klein, Don Deveux, Clark Brittain and Bryanna Scott.
Mitch Samu’s music direction and conducting of the onstage band is masterful. Samu ‘s piano, Tag Worley’s drums and Burt Singleton’s Bass make the instrumentation an auditory delight. However… it’s Don Hilsberg’s playing of the gorgeous onstage harp that really conjures the magic.
Vance McKenzie’s lighting is superb!
If you've never had the chance to be enchanted this superb ensemble is just the ticket!
Runs through June 29...and SHOULD BE EXTENDED!!!!

Posted by David Marlowe Theatre Reviews at 10:37 PM No comments:


The Graduate
The Edge Theatre: June 6 through June 29

Back in 1960 something my cousin Jacquie asked me if I thought Dustin Hoffman had more than one hit movie in him?  I said “Yes! He’s gonna have a great career!” And the rest is history. 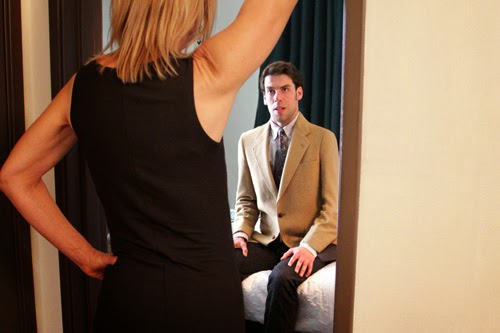 Chandler Darby’s klutzy Benjamin is outstanding. His handle on the feigned masking of his character’s confusion and naivete’ is stunning! His spastic knee-jerk reactions to Mrs. Robinson’s straight-forward questions could not be better. And just as I did with my response to Jacquie’s question about Dustin Hoffman I predict a long and successful future for Darby upon the stage. 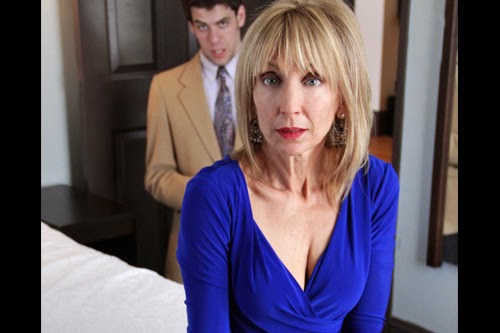 Patty Ionoff inhabits the iconic Mrs. Robinson in a relentlessly dark and seductive performance in which she gets to show off her very beautiful body. It’s a no-nonsense edgy portrayal of a desperately love-starved alcoholic.
Suzanna Wellens is superb as Mrs. Braddock, Benjamin’s mother. The measured cadence of her reading of this part adds immeasurably to our enjoyment of the show.
As the play progresses Adrian Egolf allows us to view the kind of knowledgeable woman that Elaine will become.
Rick Yaconis’s direction makes the evening fly by.  It’s deft, smooth and swiftly paced. 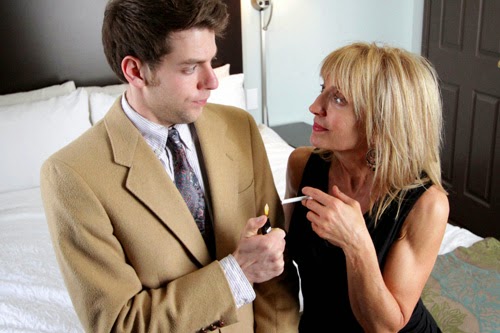 The musical numbers that bridge the scenes in Kenny Storms’ sound design are well chosen. They place us perfectly in the groovin’ milieu of this country in the 1960s.

Thanks to Pat Payne’s sensitive direction Cherry Creek Theatre has another winner on its hands with “John and Jen.”
It’s a two-act musical with lyrics by Tom Greenwald and music by Andrew Lippa.  Lippa’s best known for having composed the music for the Broadway musical, “The Addams Family” as well as for the recent musical,“Big Fish.”
Director Payne has cast the show with two of Denver’s finest: Megan Van De Hey and Casey Andree. 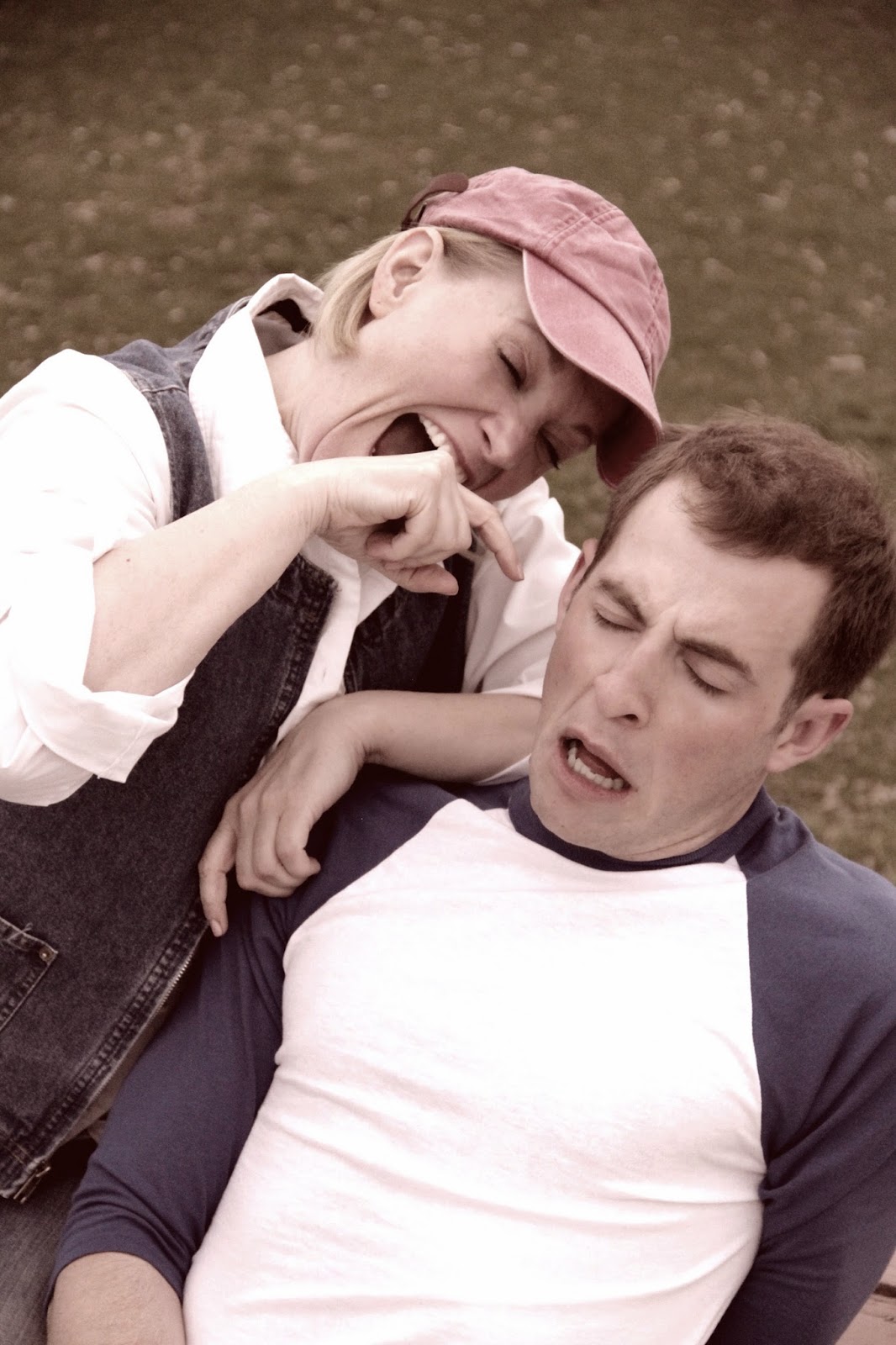 Ms. Van De Hey recently stunned us as Little Edie in Vintage Theatre’s funny and heart-breaking musical,“Grey Gardens.”
You will remember Mr. Andree for his outstanding portrayal of Claude in Town Hall Arts’ production of “HAIR.”
Both actors turn in studied performances that allow this slim, intimate musical about the love of siblings for each other and of parents for their children to become a truly memorable evening of theatre.
The intimacy of the Shaver-Ramsey Showroom is perfect for the piece. Slide projections take us from the nineteen-fifties through the eighties reminding us of our own journey as brothers, sisters and parents. If you have an emotional charge that still comes up around memories of the time of the war in Viet Nam your heartbeat will be on hyper-drive. Trent Hines’ piano and Anna Maria Lee Blocker Leavitt’s cello enhance the evening immeasurably.
The book by Greenwald and Lippa is nearly non-existent. You won’t notice though. With the spectacular voices of Ms. Van de Hey and Mr. Andree coupled with their fine acting you can be assured of a thoroughly enjoyable evening of theatre.

Posted by David Marlowe Theatre Reviews at 5:39 PM No comments: