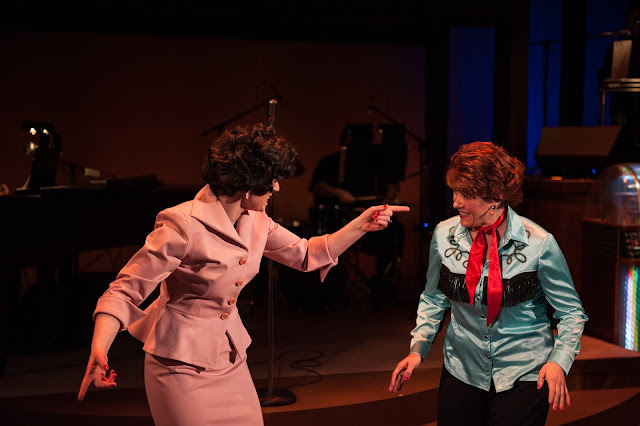 Ted Swindley’s “Always … Patsy Cline” is a jukebox musical based upon Patsy Cline’s friendship with her fan, Louise Seger. The two women met at a concert in Houston in 1961, and remained friends right up until Patsy’s untimely death.

Norrell Moore is a luminous Patsy Cline. Her performance is the stuff of which musical theatre dreams are made. Her acting and authentic - sounding vocals astound. A few of the songs Moore knocks out of the park are: “Crazy,” “Sweet Dreams” and “I Fall to Pieces.”
As Patsy’s biggest fan, Louise Seger, Alicia King Meyers brims over with a down-home warmth and hilarious exuberance. King-Meyers, who also co-directed the show with Producing Artistic Director Michael J. Duran, puts a personal spin on Louise that really makes the character her own.
“Walking After Midnite” and “Blue Moon of Kentucky” are just a couple of the songs that brought down the house on the night this reviewer was in attendance.
Neal Dunfee’s music direction of the mostly above stage band is even better than his usual professional work.  His accompaniment of Ms. Moore on the piano is ear-pleasing indeed.
The usual suspects are making the technical end of this production a real winner. Wayne Kennedy’s audio  design and Brett Maughan’s lighting of Amy Campion’s honky tonk scenic design conspire to make this evening of musical theatre a complete delight.
One would be remiss not to mention Debbie Spaur’s expert work in the hair and wig design department.

Posted by David Marlowe Theatre Reviews at 9:28 PM No comments: 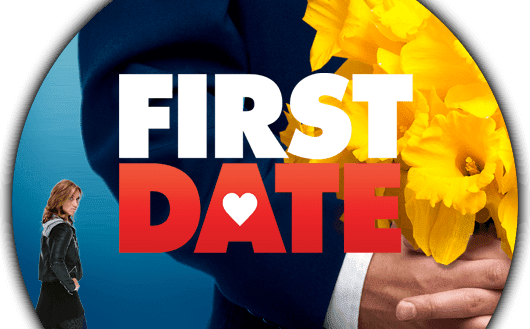 FIRST DATE is a complete delight! It’s so lighthearted, up-beat and fun, you owe it to yourself to go see it. It’s a tuneful, joke-filled evening that allows us as audience to escape the horrors of the evening news… and feel good for a while! The perfect “date” musical, it’s a welcome excuse to indulge in a bit of light romantic musical comedy.
The perfect right fit for the intimacy of The Garner Galleria Theatre, director Ray Rodrick has cast the show impeccably, pacing it at such a gallop that the evening flies by.  Martha Yordy’s expert music direction of the just offstage band, gives the show a rousing, ear-pleasing accompaniment.
Adriane Leigh Robinson (Marlowe Award for her Sally Bowles in Miners Alley’s CABARET) is superb as Casey, the sexy and somewhat guarded single mother, who’s looking for “The One.” Seth Dhonau (Aaron) is utterly charming as Casey’s vulnerable and insecure blind date.
Their meet-up takes place at a busy New York restaurant in which an amazing supporting cast personifies the couple’s inner critics as crazy exes, future children, his Mom, her Dad and a manic gay friend intent on keeping her safe by calling her with reasons for a bailout!
Steven J. Burge, who played God in the Galleria’s hit production of “An Act of God,” is hilarious as the snarky, snarly gay friend constantly calling Casey to keep her safe and fricking sound by giving her endless reasons to bail out on her date!
Jordan Leigh is outstanding as a judgmental, and sometimes envious waiter. His musical commentary on their date, “I’d Order Love,” done in the style of a Las Vegas lounge crooner, is gut-busting funny. You will remember Leigh from his indelible performances in “Five Course Love” and the now legendary run of The Galleria’s “I Love You, You’re Perfect, Now Change!”
Lauren Shealy is adorable in multiple roles that include Aaron’s manipulative ex, his boss’s pushy wife, and numerous other restaurant patrons and relatives. Shealy is a Denver favorite and triple threat, who has done everything from her recent portrayal of EVITA at Lone Tree Arts to her stellar work in Arvada Center’s memorable WHITE CHRISTMAS.
With book by Austin Winsberg and Music and Lyrics by Alan Zachary and Michael Weiner,
FIRST DATE is a keeper.  One can’t help but believe that they will extend far beyond the scheduled date for its closing.

For tickets call:303-893-4100 or go online at denvercenter.orgMarlowe's Musings

Posted by David Marlowe Theatre Reviews at 9:45 PM No comments: