THE ONE ACT PLAY THAT GOES WRONG 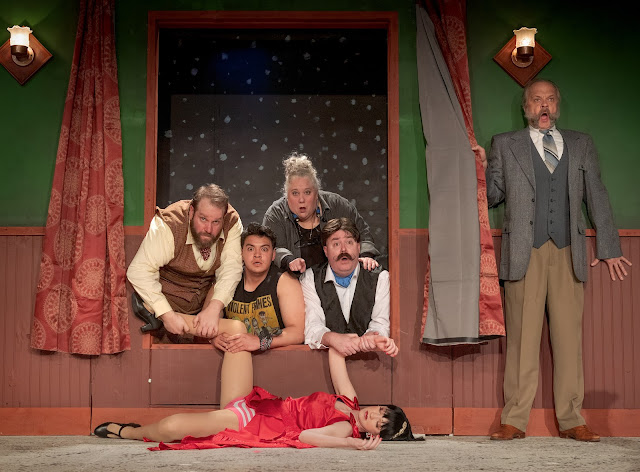 THE CAST IN THE WINDOW   Photo Credit: MATTHEW GALE PHOTOGRAPHY

When you go to see "The One Act Play That Goes Wrong" - AND YOU MUST!!! – your funny bone will experience MFS - Multiple Fracture Syndrome!!!

The insanity of the last several years will roll off of you like water off of a duck’s butt!!!

Director Steve Wilson is a genius! Seldom has this critic laughed so hard for so long at so many gags, ploys and pratfalls!

You will be gasping for air thanks to Director Wilson’s assemblage of this cast of clowns, as well as his choice of techies for the show.

The brilliantly ordered chaos that surrounds Charles Haversham’s demise is without equal in the annals of Denver theatre. Never has a murder been so hideously hilarious.

Andrew Bates’ scenic design is a character all unto itself, allowing for myriad disasters of the spectacularly theatrical variety.

Leslie O’Carroll is at the top of her game – and that is Way High Up, indeed! - as a hysterically inept stage manager.

Rachel Graham (Sandra/Florence) is as deliriously funny as she is deliciously sexy.

And that goes for Johanna Jaquith (Denise/Miss Polly) as well. It’s a treat to have Ms. Jaquith back on the boards again. One hopes to see her gracing the stage again soon.

Luke Terry (Robert/Thomas) has never been more on point as a comic!!

Brandon Billings plays Trevor, the cool ‘tech guy’ who just happens to be an adoring fan of the Violent Femmes.

In a nutshell, the whole cast will have you laughing like hyenas.

And when you’re picking yourself up after rolling in the aisles, one can’t forget to appreciate the geniuses in the sound(Rick Reid) and light booth(Kevin Taylor). Susan Rahmsdorff-Terry’s costumes are knock-outs!

I would say again that the show is deliriously funny but that is to understate the obvious.

I have said WAY too much already. Just run to get tickets and ENJOY THE HECK OUT OF THIS PLAY!!!

Posted by David Marlowe Theatre Reviews at 2:19 PM No comments:

ONCE ON THIS ISLAND 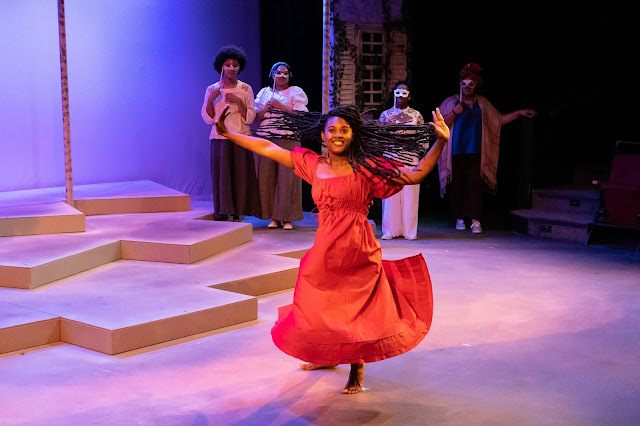 Run to get tickets for ONCE ON THIS ISLAND!!!

Director Betty Hart and her outstanding cast will transport you to the august realm of Musical Theatre Heaven.

With book and lyrics by Lynn Ahrens, and music by Stephen Flaherty, “Once on This Island” is based on the novel “My Love, My Love,” by Rosa Guy, which is a re-working of Hans Christian Anderson’s “The Little Mermaid.” (It is to be noted that Mr. Flaherty composed the brilliant score for the musical “Ragtime” and Ahrens wrote the lyrics.)

IN 1991 this musical was nominated for nine Tony Awards including Best Musical, Best Book for a Musical and Best Original Score.

Camryn Nailah’s performance in the role of Ti Moune enchants. Her breathtaking solo dance at the ball warrants the price of a ticket all on its own.

Arabella Beaubrun’s volcanic belting of “Mama Will Provide” is magnificent!

As Daniel, Stefan Beal delivers a lovely version of “Some Girls.”

The talents of Heidi Carann Snider(Papa Ge) ,Nicole Siegler(Erzulie) and Nnamdi Nwankwo(Agwe) complete this remarkable cast. All are excellent in their roles.

Christopher Page-Sanders’ electrifying choreography is pulse-pounding.  Astounding throughout, his work on “We Dance” and the jaw-dropping solo of  Camryn Nailah are of special note. Page-Sanders’ name is one to search out in every theatre program. Genius!

The story revolves around racist elitism in an island in the Antilles in the Caribbean Sea between peasants of dark color and those of a lighter hue, the descendants of French plantation owners and their slaves.

For tickets call the box office at 303-794-2787 or go online at townhallartscenter.org

Posted by David Marlowe Theatre Reviews at 8:23 AM 1 comment: 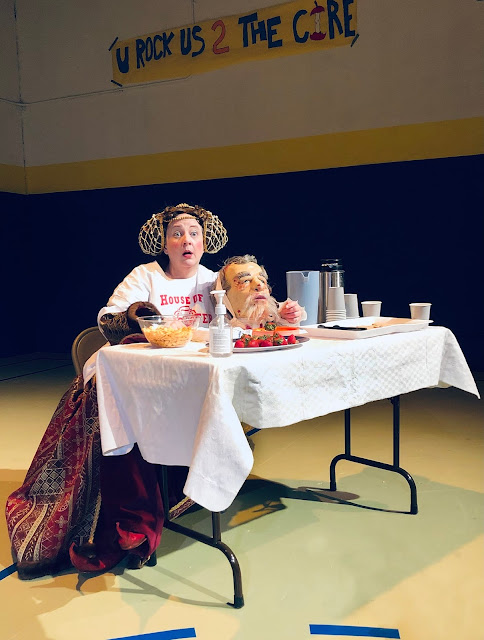 Whether you’re “in the vein” (sorry!) for a ridiculously funny play, or willing to give up your “kingdom for a horse”- laugh, (sorry again!) Buntport’s RICHARD’s the one for you!

Lucky for us, Buntport’s shows are never what anyone can possibly imagine.

Imagine yourself in a seat in a school gym where self-absorbed pundits eat strawberry snacks.

In a nut shell, The Richard the Third Society is having its meeting in the school gym this time. Having invited special guest, Philippa, a novelist and famed reporter on the finding of Richard’s bones neath a parking lot, this society of Richard enthusiasts is set for a grand interview.

Played with delightfully absurd propriety by Hannah Duggan, Phillipa goes from prim to explosive in a nano-second when sports activity from the other side of the gym interrupts her coy presentation.

There’s also a wondrous representation of Queen Margaret by the dynamically gifted comic, Erin Rollman. In eye-popping period robes, headgear and pointy shoes, this actor punctuates the evening with hilariously engaging trivia involving  everything imaginable, from Victorian undergarments to a discussion of accents!

Arriving late for the festivities, George, the president of these Richard enthusiasts, played with preening narcissism by Erik Edborg, spars with every man ‘Also George,’ (Brian Colonna) who does everything from setting up and tearing down, to writing of the minutes once the meeting is over.

I hope I haven’t said too much about this 50thoriginal play by these intrepid players. By now everyone knows that Buntport is a national treasure. All four of these astoundingly talented actors are famous for keeping us guessing as to which comic universe we’ll be exploring next.

Get set to be wondrously entertained!!!

Oh, and let me know if the Bard actually did malign King Richard. I mean, Really!!! Isn't everyone 'discontent in winter?"(not sorry.)

Buntport Theatre is located at 717 Lipan Street in Denver.

Posted by David Marlowe Theatre Reviews at 10:25 AM No comments: