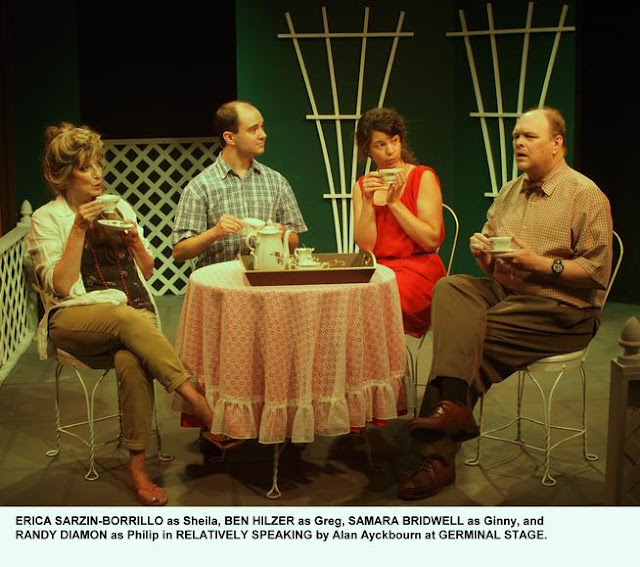 Germinal Stage Denver’s production of Alan Ayckbourn’s “Relatively Speaking” is a delightfully entertaining evening of theatre.        One smiles all through the set-up in the first act  and laughs out loud at the mistaken identities and consequent misunderstandings in the second.
Directed and Designed by Ed Baierlein and featuring costumes by Sallie Diamond, the show is well worth the trip to the GSD Theatre at 73rd and Lowell.
Samara Bridwell plays Ginny, the sexy young lady of the piece who is the primary cause of all the confusion.
Ben Hilzer plays her eager but naïve boyfriend Greg, who finds an address and follows Ginny assuming that she’s going to visit her family.
Randy Diamon plays Sheila’s husband, Philip with appropriately stiff British propriety until things get dicey.
The divine Erica Sarzin-Borrillo, leads this cast of four with a flourish of delightful flightiness and wonder. She’s a true joy to watch.
This production is a welcome diversion during these dog days of summer.

For tickets call 303-455-7108 or go online at germinalstage.comMarlowe's Musings

Posted by David Marlowe Theatre Reviews at 9:10 PM No comments: 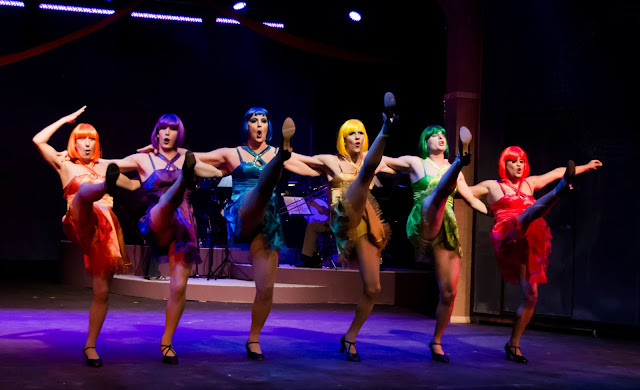 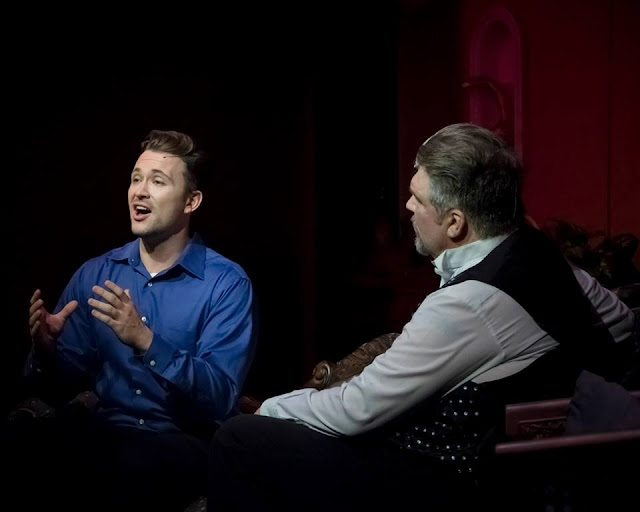 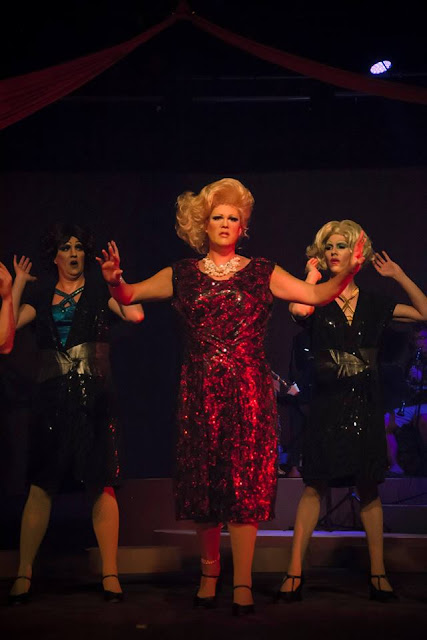 Posted by David Marlowe Theatre Reviews at 7:29 PM No comments: 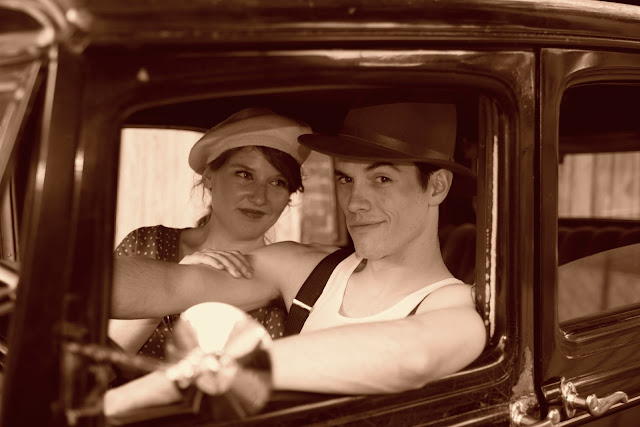 Equinox Theatre’s production of  “Bonnie and Clyde, the Musical” is worth a peek for many reasons. The music by Frank Wildhorn (“Jekyll and Hyde”) with lyrics by Don Black is enjoyable in the listening if mostly forgettable thereafter. The book is by Ivan Menchell (“Chitty Chitty Bang Bang” and “The Cemetery Club.”) Just as in Arthur Penn’s film “Bonnie and Clyde” these two bank robbers and killers are painted as good-looking, glamorous figures. In this version the duo are even asked for autographs by the people they're threatening. So we continue to see that the violent culture of America makes heroic icons out of those who wield the mighty gun.
Annika Merkel is a fetching Bonnie with a great set of pipes. Her soprano is very enjoyable and her stage presence appealing. Ms. Merkel is another up and coming star out of that phenomenal UNC acting program.
Kalond Irlanda does a damned good job with Clyde. His vocals are mostly all good. However, when the score begins to rock into the upper range it’s difficult for Irlanda to go there. The evolution of his acting skills since his last outing as Bobby Strong in “Urinetown, the Musical” is heartening, and one hopes to see him soon again upon the Denver stage.
Matt Kok, Jesus in “Godspell” and Man 1 in “Songs for a New World” at Miners Alley Playhouse, puts another notch in his holster belt as Ted, the cop who loved Bonnie.
Preston Adams’ preacher raises the roof with his all-out Gospel singing of “God’s Arms Are Always Open.”
Sarah Dutcher who sings and acts the part of Buck's wife, Blanche very well could have used a little more direction in the acting of this southern hick.
Gregory Farinelli gives a strong reading of Frank Hamer, the Texas Ranger who “got” Bonnie and Clyde.
Benjamin Cowhick’s fine performance as Clyde’s brother Buck gives us the authentic flavor of the old South in its day. Cowhick received the 2014 Marlowe Award for his performance in Ashton and Abster’s production of “Good Television.”
The costumes by Deb Flomberg are mostly right on target.
Young Clyde is played by Carter Novinger  (Marlowe Award for his performance as Winthrop in Town Hall Arts’ Production of  “The Music Man.”)
Ashlynne Bogema, a 7th grader at Thunder Ridge Middle School, plays Young Bonnie. It is to be hoped that this fine young actor will continue her studies of the dramatic arts.
Michelle Fitzgerald’s music direction is thoroughly well executed. The offstage orchestra for “Bonnie and Clyde” sounds better than those of any of the musicals this reviewer has attended thus far at The Bug.
It is to be noted that Curt Behm is in charge of “microphone tech” for this show. His work allows the dialogue to be heard more crisply and clearly than ever before at this venue.
Colin Roybal’s direction is his best to date. Roybal, who constructed the very well done minimalist scenic design, also provides the lighting.

The Bug Theatre is located at 3654 Navajo Street, Denver, Colorado.
For tickets call: 303-477-5977  or go online at bugtheatre.infoMarlowe's Musings 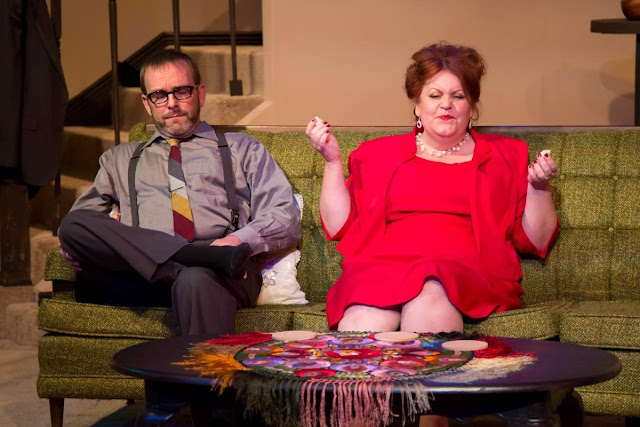 Edward Albee is our greatest living playwright. “Who’s Afraid of Virginia Woolf” is arguably his best play. It won the Tony Award for Best Play in 1963.
The production currently on view at The Edge Theatre is riveting throughout and emotionally draining. It’s a roller coaster ride that lovers of dark serious drama will not want to miss.
Emma Messenger delivers a Martha, seething with rage that translates into castrating vitriol directed at her well-meaning, academic husband, George.  Messenger commands the stage with intensity and passion.
Scott Bellot’s passive aggressive George starts on simmer, comes to a slow boil and then blows the lid off the pressure cooker. It’s a violent moment that allows his pent up rage to boil over scalding all in attendance.
JamesO’Hagan-Murphy’s wunderkind, Nick finds out from Scott Bellot’s loquacious and world-weary George that the cliché about “Old age and treachery winning out over youth and skill” is only a cliché because of its truth. Inept in everything but having secured a job on the bottom rung of the academic ladder and being eye candy for the older professors’ wives, O’Hagan-Murphy’s Nick finds himself a guppy in a tank-full of piranha.
Maggie Stacy’s performance as Honey is completely natural. This Honey’s humor – and nausea - is never showy and always completely organic. Her moment of discovery that her husband, Nick has betrayed her trust in speaking of her ‘hysterical pregnancy’ is memorable for its intentionally pathetic poignancy.
Rick Yaconis directs this black comedy with unflinching honesty. His direction of Ms. Messenger to go directly to the bar and chop a banana in half at the top of the play speaks volumes.
Perhaps a few more books might have been stuffed into the bookcase of these aging academics. But other than that Christopher M. Waller’s scenic design is exceptional.Marlowe's Musings

Posted by David Marlowe Theatre Reviews at 8:57 PM No comments: