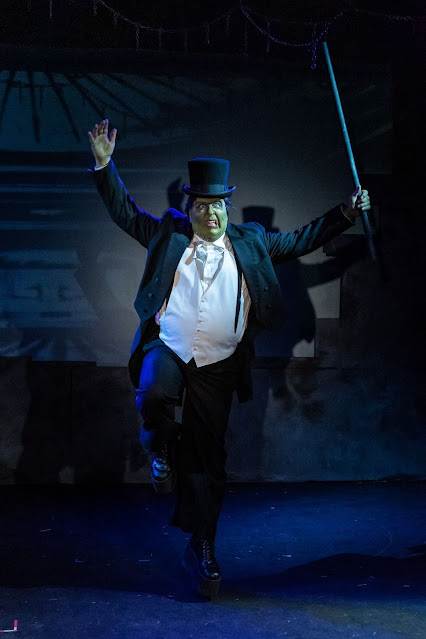 Jeff Betsch as The Monster

It’s the kind of screen to stage musical that has everyone in the audience lying in wait for those iconic lines spoken by their adored Mel Brooks characters … and then falling apart laughing at their hysterical vaudevillian delivery.

Thanks to director Linda Suttle’s impeccable casting, those characters are Super Duper.

Cooper Kaminsky is Dr. Frankenstein(That’s Fronkensteen), Christine Carter Kahane is Frau Blucher(horse whinny), Colby Reisinger is Inga, and Jefffrey Betsch is the monster, tapping his way into our hearts all spruced up and Puttin’ on the Ritz. His performance is frighteningly well done.

Christine Kahane has the exact right sour disposition for Victor’s housekeeper, Frau Blucher. With a stink eye that can peel paint, and a knock-out comic timing, Kahane is magnificent!

The masterful choreography by Adrianne Hampton is utter precision when needed and a delightfully ordered chaos when that’s required.

The Music Direction by Brandon Bill is superb!!! Although all the musicians in the orchestra are excellent, special kudos go out to the evocative and haunting violin of Adelaide Pappas Naughton.

The flickering candles and lightning flashes of uneasy paranormal atmosphere are the very fine work of co-lighting designers Emily Maddox and Kevin Taylor.

With her Heidi-like blonde hair Colby Reisinger’s ultra-sexy lab assistant, Inga, is a hoot in the lab or in the hay!

Miranda Byers’ sweet seemingly pure vixen, of the diminutive stature and the lilting pure soprano, is at her best singing the ultra-self-absorbed, “Surprise! It’s Me.”

The shimmering, sparkling frocks of the two leading ladies are courtesy of costume designer, Deborah Faber.

As Dr. Frederick Frankenstein, Cooper Kaminsky becomes more and more frenzied as he is sucked into the milieu and profession of his grandfather.

From the moment he slumps onto the stage  Bryan Plummer’s zany Igor becomes the ideal super-animated counterpoint to Dr. Frankenstein in song and dance.

Have a laugh-filled evening at the theatre!!!

The hilarious musical based on the Mel Brooks classic film masterpiece.

Posted by David Marlowe Theatre Reviews at 8:45 PM No comments:

Co-produced by The PERFORMANCE NOW THEATRE COMPANY and THE LAKEWOOD CULTURAL CENTER: 9/10-9/26

Bernie Cardell is a National Treasure!!!

“The Drowsy Chaperone” is a musical parody of the American musical comedy of the 1920s. With book by Bob Martin and Don McKellar and music and lyrics by Lisa Lambert and Greg Morrison, it won five Tony Awards and seven Drama Desk Awards in 2006.

The show brims over with excellent musical theater performances from its outstanding triple-threat cast.

The show opens with the musings of a musical theatre super fan - Man in Chair- who’s trying to lift his spirits and decides on playing the original Broadway cast recording of a show called The Drowsy Chaperone. As he describes the show and plays the record – “yes, record”- the show explodes across the stage of The Lakewood Cultural Center with eye-popping, ear-pleasing panache!

Bernie Cardell portrays the Man in Chair, and his portrayal is one of those truly exceptional performances that are SO rare, it will be talked about in theatre circles for decades. Cardell’s incarnation of ‘man in chair’ is tenderly vulnerable and wondrously open as he informs the audience of all his interesting points of view about “The Drowsy Chaperone’s” characters as well as the actors who played them. Cardell’s character walks in and out of the scenes in such a way as to let us as audience realize he’s more at home in his musical theatre fantasies than he is in real life. Kelly Van Oosbree’s direction of Cardell in “An Accident Waiting to Happen,” will have you in stitches. (Sorry. No spoilers.)

In a nutshell, the plot has to do with whether Janet Van de Graaff and Robert Martin will get married or not. As the bride to be, Emma Rebecca Maxfield’s unforgettable performance of “Show Off” is breathtaking!! Andy Sievers’ performance of the groom’s “Cold Feets” is jaw-dropping!!! As Drowsy, Nancy Evans Begley’s “As We Stumble Along,” rattles the rafters.

Everything is adorably over the top in this show, from Jeffery Parker’s Latin Lothario, Aldolpho, to the pair of gangsters posing as pastry chefs played by Timothy Campbell and Kris Graves, to Adrianne Hampton’s squeaky wannabe star, Kitty.

The numbers are all, of the show-stopping variety, and you may find it hard to decide which one is your favorite. 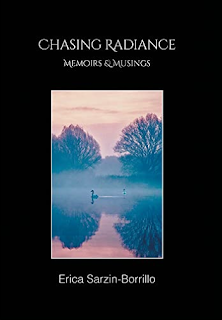 Erica Sarzin Borrillo’s new book, “Chasing Radiance: Memoirs and Musings,” is a beautifully written work that’s as poignant as it is intimate in illuminating the artist’s life. More than that, it’s an invitation to step inside the author’s heart and mind as she describes her mythic journey.

The artist’s ancestral history unfolds through letters and an interview that provides a portal into the artist’s remembrances of past experiences from the exhilarating to the traumatic.

Concluding with journal entries from the time of the pandemic as well as personal musings on the socio-political turmoil surrounding it, this is an insightful book that will endear itself to anyone seeking shamanic guidance in finding her/his way in the realms of creativity and spirituality.

It's available on Amazon.

Posted by David Marlowe Theatre Reviews at 8:48 AM No comments: