District Merchants is a dazzling, multi-faceted gem of a production! 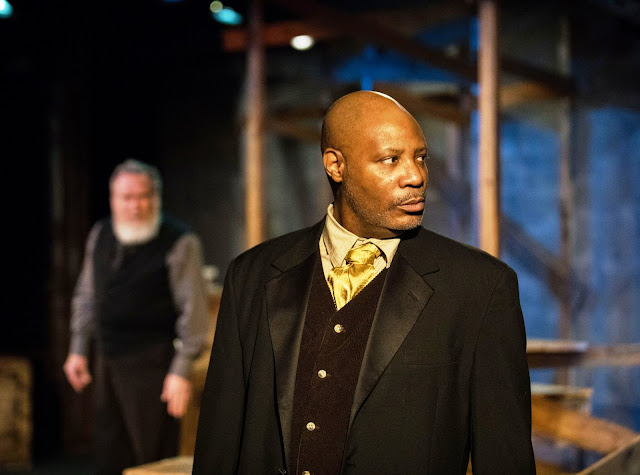 So many times, Shakespeare’s works are transported to other times, places and planets for little,
if for any good reason. Here, playwright Aaron Posner’s choice to set his reimagining of “THE MERCHANT OF VENICE” in post - Civil War Washington D.C. works like a charm. Although the focus is on the conflictual relationship between blacks and Jews, the play touches on many aspects of racial prejudice.

Posner’s bold choice to have the actors in constant connection – and communication - with the audience works superbly. His is a juicy piece of writing that stuns both in craft and wordmanship!
Len Matheo, who brought Posner’s “My Name is Asher Lev” to the stage with such heart-opening brilliance, has directed this show with a sure hand. He’s cast some of Denver’s finest actors and given the piece a brisk pace.
Chris Kendall’s Shylock is powerful.
Cris Davenport’s Antoine Dupree is revelatory!
Last seen by this reviewer as Mother in The Oldest Boy at Vintage Theatre, Candace Joice is luminous as Portia.
Sinjin Jones is  splendid as Portia’s love interest, Benjamin Bassanio.
Kristina Lorice  Fountaine is a vibrant Nessa.
Isaiah Kelley’s performance as Launcelot is hilarious!
Jessica, Shylock’s daughter, is an arresting Amy Elizabeth Grey.
Sean Michael Cummings is most memorable as the bold Finn Randall, Jessica’s impetuous lover.
The technical aspects of the show are handled with a professional expertise sometimes lacking in other venues. One would be remiss not to mention Jonathan Scott-McKean’s stunning set, Vance McKenzie’s mood shifting, eye-leading lighting design and the costumes created by Crystal McKenzie. Len Matheo’s  sound design choices add a startling emotional dimension to the proceedings.

In case you missed something… I LOVED IT!Marlowe's Musings

Posted by David Marlowe Theatre Reviews at 6:23 AM No comments: