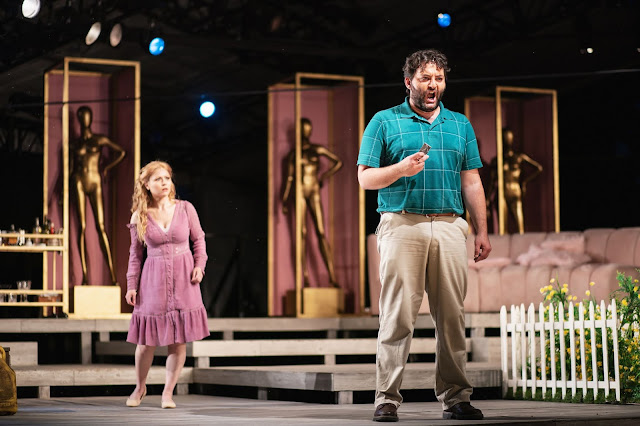 As the Duke of Mantua, GALEANO SALAS’s sensational rendition of “La Donna e mobile” will resound in your head for days.

Soprano ALISA JORDHEIM delivers GILDA’s arias in such a way as to intoxicate us with auditory champagne.

JOHN PAUL HUCKLE’s performance in the role of the assassin, SPARFUCILE, chills us to the bone.

RIGOLETTO, Verdi’s three-act opera, debuted in Venice in 1851. The libretto is by Francesco Maria Piave, and  based on Victor Hugo’s “Le Roi s”Amuse.” Rigoletto is significant in that it is the opera in the composer’s ‘middle period,’ that proves a turning point in Italian opera history.  In this finest music-drama since the days of Monteverdi, the title role is considered by many to be the most demanding ever penned for a baritone. Breaking through the operatic conventions of its time, RIGOLETTO was an immediate success.

Set in 16th century Mantua, the hunchbacked court jester Rigoletto makes fun of the rage of the old Count Monterone, whose daughter has been seduced by the devious Duke.

Monterone curses Rigoletto, and the courtiers who hate Rigoletto, discover that he has a young lady who’s hidden in his home.

Not realizing that Gilda is the court jester’s daughter, they abduct her, and the duke, posing as a poor student, seduces her. When Rigoletto hires the assassin Sparfucile, to get his revenge, Gilda, who is in love with the duke, maneuvers herself into a place in which she is killed in his stead.

Director Jose Maria Condemi has done a great job in casting and pacing this production of Verdi’s opera for the most part. However…one might wish that he had cast an actor who appeared to be much older than Phillip Lopez in the role of Count Monterone, the man who curses Rigoletto.

What to expect: Powerful vocals, superb conducting by Maestro JOHN BARIL of the outstanding Central City Opera Orchestra, and minimalism on the technical end of things. There is a contemporary costume design by EDINA HISER, a minimalist set design by Steven C. Kemp suggestive of a present-day country club, and mostly ambient lighting due to the show being presented in an outdoor setting. (One can’t wait to once again experience Master Lighting Designer David Martin Jacques’ exquisite Art ‘inside’ next year when the Central City Opera House opens its doors once again.)

Run to get tickets!!!

Posted by David Marlowe Theatre Reviews at 12:32 PM No comments: