THE LEADING LADIES OF BDT STAGE: 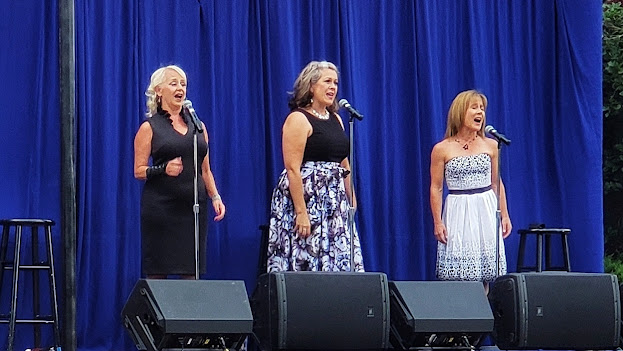 BDT Stage has done it again!

Ever since the middle of March, live theatre has been nearly non-existent. Right?

Thanks to BDT Stage’s new cabaret production of THE LEADING LADIES OF BDT, things are starting to look up.

This weekend and next, three of our favorite divas take the stage in the south parking lot of BDT Stage to enchant you with your favorite Broadway songs as well as a little Gershwin… and just a smidge of The Andrews Sisters.   These three glorious musical theatre Divas -  and Marlowe Award winners - are Joanie Brosseau-Rubald, Alicia King Meyers and Tracy Warren.

Brosseau-Rubald , who has played everything from Nellie Forbush in  SOUTH PACIFIC to  Dulcinea in MAN OF LA MANCHA, enchants us with such favorites as “Don’t Cry for Me, Argentina,” from EVITA and Adelaide’s Lament from GUYS AND DOLLS.

Tracy Warren, who has acted on Broadway as well as done touring shows, blesses us with “We Can Never Go Back To Before” from RAGTIME: THE MUSICAL and “Practically Perfect” from Disney’s Broadway production of MARY POPPINS.

Alicia King Meyers delights us with “Before the Parade Passes By” from HELLO DOLLY and her fantastically funny version of Ursula singing “Poor Unfortunate Souls” from “Disney’s THE LITTLE MERMAID.”

If that were not enough, producer/director Michael Duran sings and does a bit of a soft shoe accompanied by multiple Marlowe Award winner, music director, Neal Dunfee.

The price of a ticket includes your choice of a scrum diddly sandwich with cookie and chips.

You bring your own lawn chair and BDT Stage serves you a scrumptious picnic dinner.

How does it get any better than that? Oh, and they're serving their usual outstanding drinks from their well-stocked bar.

Masks are required when not eating, and 10 x 10 plots of land are marked off six feet apart.

Safety measures are everywhere adhered to. You’ll feel safe and enjoy an evening you will never forget.

Give yourself a much-deserved and totally protected evening of musical theatre cabaret!!!

Posted by David Marlowe Theatre Reviews at 9:59 PM No comments: 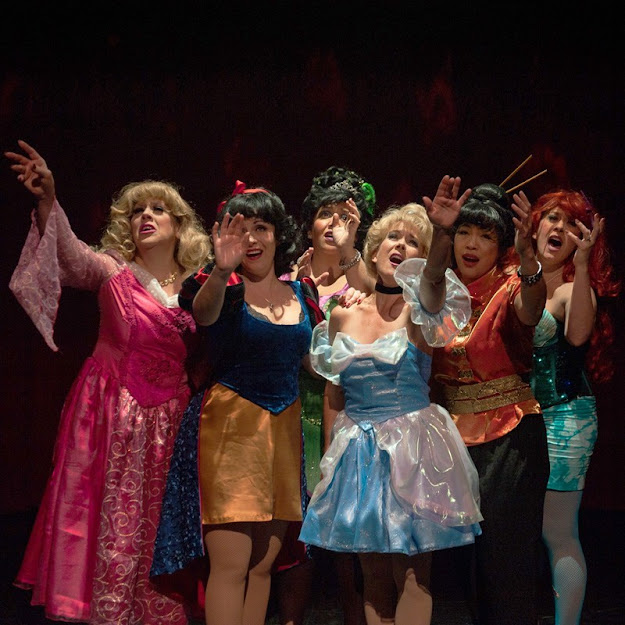 Due to the social distancing caused by this pandemic, live theatre has been sadly missing from our lives.

Now, however, BDT Stage producer Michael J. Duran is reimagining it, so that we can all access it right in our own living rooms.

Starting on July 1, and running at least through the end of the month-we hope it will extend!- Duran has created a wonderful online streaming event with his production of DISENCHANTED, the hilarious send-up of the Disney princesses’ lives after their princes have come.

The royal honeymoons are over and this reality therapy look at life in the aftermath is not looking very much like “happily ever after.”

Linda Morken delivers the eye-popping costumes and Amy Campion’s scenic design is one for the (story)books. (sorry.)

Neal Dunfee’s music direction and conducting of the just off and above stage, BDT Stage band (he also plays keys) with Jon Stubbs on bass and Nick Gnojek on drums, is Amazing!

The book,music and lyrics penned by Dennis J. Giacino, made the show a big hit off Broadway. DISENCHANTED was nominated for the 2015 Outer Critics Award for Outstanding Off Broadway Musical as well as receiving the 2015 Broadway Alliance Award for Best New Musical.

Put the kids to bed early, because this is a more adult type of look at Disney's princesses.

Go to the BDT Stage website and get your tickets now. Who knew that you could have the Hottest Ticket in Town playing right in your own living room this summer?

Posted by David Marlowe Theatre Reviews at 6:48 AM No comments: