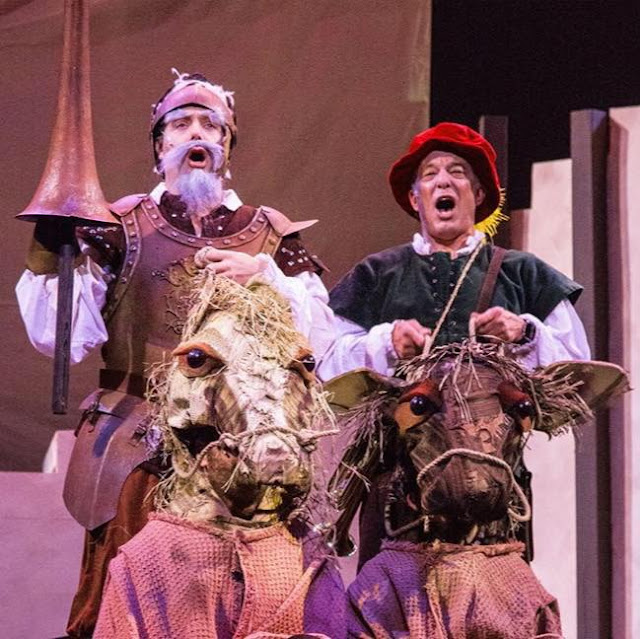 “Man of La Mancha” appeared on Broadway in 1964. Nominated for seven Tony Awards, it won five: Best Musical, Best Direction, Best Musical Score (Mitch Leigh and Joe Darion), Best Scenic Design and Best Performance by a Leading Actor in a Musical (Richard Kiley.)
Based upon some of the stories in Cervantes’ seventeenth century classic, “Don Quixote,” this musical tells the tale of a mad knight who is able to see through the illusions of this world’s mundane facts of experience, finding the sublime light of the Divine in what others judge to be unacceptable.
Superb in his acting and singing of Cervantes/Quixote, Mr. Langhoff’s soaring rendition of “The Impossible Dream” is magnificent! 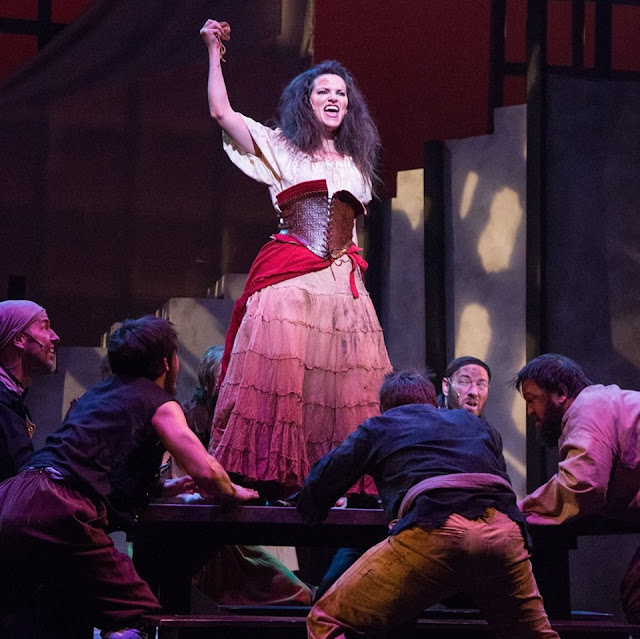 Lindsey Falduto and the cast of "Man of La Mancha"(Photo credit: RDG Photography)

Lindsey Falduto weaves a magical spell as she moves from a raging scullery maid to the elegant lady envisioned by the knight with her vocals and acting of the part of Aldonza/Dulcinea. Her singing of “It’s All the Same” is as defiant as her “What Does He Want of Me” is tenderly inquisitive.
Brian Trampler’s Sancho Panza may not be the stereotypic pudgy sidekick we so often see depicted. Nevertheless … his performance in the role is memorable for many reasons. Mr. Trampler seemed to find humor everywhere; and his affection for the mad knight is hilariously evident in his well-sung “I Really Like Him” and “A Little Gossip.”
The trio of housekeeper, padre and Antonia, (Liz Larson, Vern Moody, and Colby Dunn) singing “I’m Only Thinking of Him,” is ear-pleasing and very funny. Ms. Dunn’s voice is a silken ribbon of melody that intoxicates.
Jeff Butler’s Innkeeper and Jim Honiotes' Barber are both rousingly well sung!
Adam Luhrs creates a Dr. Carasco with a  strong stage presence. One hopes to see this actor onstage again soon.
The costumes by Cindy Franke are exceptionally well thought out. The one for The Knight of the Mirrors is wondrous.
Kelly Van Oosbree’s choreography is at its best in the Moorish Dance featuring Chelsea Cusack, who studied at the Joffrey Ballet in New York City.
Van Oosbree’s direction is a bit clumsy at the top of the show. However …  it soon finds its legs as the director paces the subsequent proceedings at a nice trot. At one point director Oosbree creates an amusing chess game with her blocking and at another she has the actors create the door to the inn yard with horizontally intersecting chairs.
One might have wished that the hooded figures in Quixote’s confrontation with the Knight of the Mirrors would have held up actual mirrors instead of black shields. (Just something to reflect on.)Marlowe's Musings