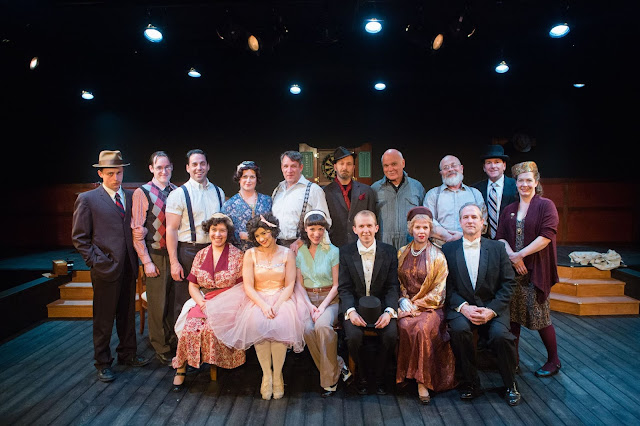 The cast of You Can't Take it With You

Director Jamie Billings takes this old warhorse out of the pasture and lets it run for the roses!

It’s a classic that won the Pulitzer in 1937 and just completed a successful run on Broadway in which local Diva Annaleigh Ashford won the Tony for Best Featured Actress in a Play.

This production is remarkably well cast with a number of Miners Alley favorites and some gifted new (to this reviewer) artists as well. The thrilling part is that this very large ensemble is balanced magnificently. Usually one actor or another winds up chewing the scenery with more brio than the rest. Not here!

Ms. Billings paces this Moss Hart and George S. Kauffman classic at such a brisk clip that the evening flies by.

Jonathan Scott-McKean’s outstanding sound design, with its thrilling explosions from the basement and scene-bridging ‘back in the day’ recordings are about as good as it gets. Scott-McKean also did the scenic design which features vintage pieces as well. They’re not polished museum pieces though. These are intentionally unvarnished wooden furnishings that give us the illusion of being in a real New York home back in the thirties.

It’s New York City in 1936 and the lovable and somewhat eccentric members of the Sycamore family are in the process of their unique activities when the strait-laced parents of their daughter’s fiance shows up for dinner a day early. The mayhem that occurs thereafter will be familiar to anyone who has seen the Broadway show or the Frank Capra movie starring Jimmy Stewart. Nevertheless director Bilings manages to keep the proceedings so fresh you’ll feel utterly exhilarated.
You'd better get your tickets now for Miners Alley Playhouse's enchanting production of "You Can't Take it With You." And bring everyone in the neighborhood. You CAN take them with you.