Stephen Sondheim’s scores are always daunting! Any performance of those scores by young troupes lacking a great deal of classical training is bound to exhibit glitches in the singing thereof. Nevertheless … Equinox Theatre Company’s production of Steven Sondheim’s “Assassins” gives one much to recommend.

One cannot praise the acting and directing of the scene describing JFK’s assassination too highly.

Scott Bellot’s performance as Lee Harvey Oswald is brilliant! His Balladeer is superb!

At the risk of the redundant one must reiterate that the scene in the play dealing with the assassination of JFK is riveting in the acting and thoroughly well directed. It seemed as though director  Pat Payne felt  what was involved here more deeply than some of the other material. As a result he was able to communicate that feeling to his actors and ultimately to us as audience with greater immediacy and impact.

As Lee Harvey Oswald, Scott Bellot moves from a state of intentionally unfocused detachment to a centered if “possessed” concentration that is exactly right. Bravo!

Perhaps because of opening night jitters Adam Shelton’s handsome take on John Wilkes Booth waited to come alive until the final scenes in which his ghost – along with those of all the other assassins - persuaded Lee Harvey Oswald to ‘come alive’ as a member of their infamous group. Perhaps this was intentional. If so, it still leaves us with a bland take on the wounded Booth in Garrett’s barn earlier in the show. 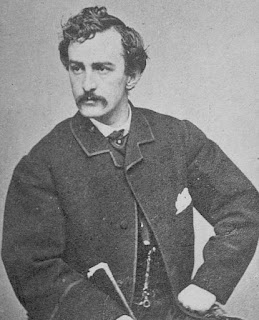 Shelton’s performance in the final scenes is outstanding! (One must confess that Mr. Shelton had some big stage shoes to fill in following Jeff Roark and Brian Hutchinson in the role of Lincoln’s assassin. )

Patrick Brownson’s Sam Byck is acting of the brilliantly congruent variety. Once Brownson has his character by the throat every ounce of his energy becomes Byck! Every word is sensationally nuanced and his deranged character is consummately well put forth. Bravo! 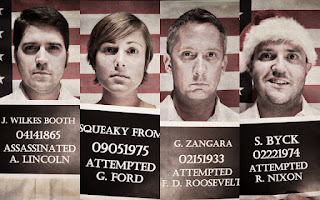 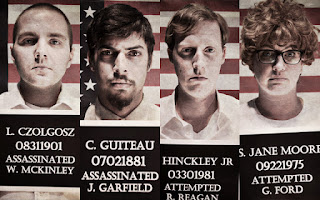 Torrey Jenkins, as the man who assassinated President Garfield, gives us a fascinating Charles J. Guiteau.  Jenkins is shorter in the tooth and of a slimmer frame than one might have cast in this role, however he has more of the Frenchman in his face and physiology than any previous actor to have been seen by this reviewer in the role.  His erratic dancing of Matthew Daley’s choreography for “I am Going To the Lordy”- his psycho journey to the scaffold-puts one in mind of the minstrel shows that were so popular in the late 1800s as well as giving us a black humor mirroring of le danse macabre his vacated body will soon do at the end of a rope.

Sue Ann Shelton’s stage portrayal of Squeaky Fromm is very fine indeed in the singing as well as in the acting. About all that was missing here was the self - immolation, which Jenny Hecht provided in spades in the Next Stage productions.

The scenic design with a scaffold above, red, white and blue bunting below and a scoreboard stage right is quite well done.
The videos - especially those pertaining to the assassination of JFK - enhanced the production.


Although one misses the folk sound of a banjo in “The Ballad of Booth,” the music direction by Timothy Kennedy is superb in his conducting of the six-piece onstage band. One does, however, wish for more classically trained voices with regard to the singing and more precision with regard to the execution (sorry!) of Matthew Dailey’s very fine choreography.

In the performance at which this reviewer was in attendance there were problems with the lighting –especially at the top of the show when it seemed the person running the spotlight was unable to decide which of the two significant figures on stage to illuminate. In fact they should have both had the light.

Even though “Assassins” is a stretch for any young company the gallows humor in the Equinox production comes off as if it were a dream. … and to quote Mr. Sondheim as lyricist, “Everybody’s Got the Right to Their Dreams.”

p.s. If you happen to be an Assassins virgin this show is unmissable!

Equinox Theatre Company Presents:
Stephen Sondheim's “Assassins”
at The Bug Theatre
3654 Navajo Street in Denver
August 24 through September 15
With a Pay-what-you-can Industry Night September 6
Performances are Friday and Saturday at 7:30 PM
Tickets are $15 in advance or $18 at the door
Group rates are available for groups of 10 or more
Tickets available online at www.EquinoxTheatreDenver.com
Recommended for mature audiences