Spotlight Theatre’s “Murder on the Nile” is a pleasant evening of –if not armchair travel, at least travel of the theatre seat variety. Imagine sitting back in one’s easy chair while reading a good mystery and presto change-o! finding himself in a theatre seat as a good cast of that book’s interesting characters appear upon the stage.

It was just the ticket for this reviewer on this particular night. The play is fascinating in much the way all Agatha Christie plays are. It’s full of snooty socialites, disgruntled servants, ex-lovers and clergymen! One does miss the presence of such iconic detectives as Miss Marple and Hercule Poirot, but the mystery unravels all the same after the requisite murder takes place. One can’t help but wonder why Monsieur Poirot was not featured in the play since the novel is described as an Hercule Poirot mystery. Excuse moi!

The producer warns the audience before the show begins that if anyone should divulge even a hint of the murderous character in question to prospective ticket buyers untold horrors will occur. Fortunately for us we can feel safe since the John Hand Theatre is not large enough to have a huge chandelier dangling precariously over our heads.

A jilted fiancée, who is stalking her ex-lover and his fabulous new wife, is at the core of this venture into the wonderful world of Agatha Christie.
It’s an eye-pleasing production thanks to Bernie Cardell’s superbly laid out and well appointed set. Cardell, who also directs, gives us a Christie mystery that flows along at a nice steady pace similar one supposes to that of its titular river’s current.  It has quite a few eddies and damned few rapids. Since the show has a rather large cast and a rather modest budget director Cardell has done a rather ingenious thing with regard to casting the show.

He has given us a core of superb local actors all well known for their skill in acting and injected a group of new, mostly young talent into the supporting roles. The result is heartening.

The core group I describe is composed of Haley Johnson, Deborah Curtis, Christian Mast and Todd Black. The newbies include Phillip Bettison, Jenny Weiss, Kaity Talmage-Bowers and Chrissy Basham. All four of these young artists show promise and one hopes to see them again soon upon the Denver stage. 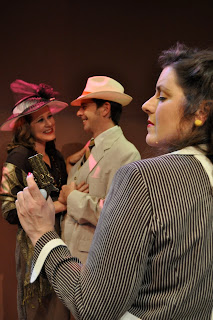 Haley Johnson is the standout in the role of Jacqueline De Severac. Deborah Curtis shines in the role of Miss ffoliot-ffoukes (It’s a lot of “f”s but that’s what they have in the program!) Christian Mast has been cast in the role of the Lothario of this show, Simon Mostyn. Todd Black’s Canon Pennefather is superbly and intentionally stoic.

The lighting by Brian Miller is appropriately sunny.