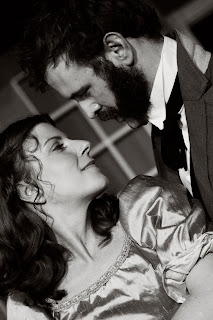 Barbra Andrews and Matthew Blood Smyth in Paragon's "Miss Julie"
“Classism kills” is the directorial core concept for Paragon Theatre’s current production of August Strindberg’s “Miss Julie.” With this play playwright Strindberg was emulating Emile Zola who was the literary father of naturalism. Zola believed that Life could be described as a slaughterhouse. Lurid, pungent and as deterministic as it was ugly, Zola painted a dark picture of Life that left his characters powerless in the face of brutality, addiction and squalid poverty. Someone once described naturalism as a style that puts forth a “deterministic plot of decline or degeneration where characters are crushed by the forces of a universe they cannot understand nor control.” The three-person cast has been well chosen with regard to visual aspects of facial and physiological appearance. With regard to natural talent, style and technique Barbra Andrews is outrageous and outstanding. The facial expressions of Ms. Andrews in her portrayal of Miss Julie provide us as audience with a kaleidoscopic out-picturing of this power broker’s cerebral contortions. The multitude of nearly simultaneous synapses occurring in Miss Julie’s brain is instantly on view with exquisite timing and a vivid visual communication of the title character’s thoughts. Ms. Andrews’ coiffure and costume are of the exquisite variety providing exaggerated contrast to those of both her servants. Matthew Blood Smyth portrays Jean, the servant after whom miss Julie lusts. Suzanne Favette is Kristin, another servant, who is also in the thrall of Jean. In the interplay of Jean and Kristin the word “classism” referred to above may be seen as interchangeable with that of “sexism” since male chauvinism was rampant at the time of this play’s appearance. All the characters in this show have major control issues and as Strindberg sees it, so does everyone on this planet. The characters in this play use rank, sex and religious belief to further their cause in pushing the negative ego into the foreground to the detriment and dismay of everyone else. It’s bad enough having these control freak issues pulling them together and pushing them apart. Besides having to deal with each other’s narcissistic negative egos there is the fear of losing face and fortune at the hands of society. Outside the walls of the room in which these three characters interact is the audible roar of society, which we hear first as a kind of raucous party and later as a threatening mob. There is a scene in the play in which a canary meets its maker at the hands of one of the principals. We only hear the blow. If this were true naturalism we would not only hear but see the awful existential act in its totality and the blood would splatter out before - perhaps even upon - us all. This scene leads us as audience out of the Naturalism of Messrs Strindberg and Zola and into the Realism of Monsieur Flaubert. Had Miss Julie’s bird’s canarial demise had just a touch more of the spiritual apotheosis of Felicite’s parrot in Flaubert’s “Un Coeur Simple,” the whole situation might have been “tweetable.” Sorry.
Unsuitable for bleeding heart ornithologists.
Paragon Theatre, 2810 Larimer St. Shows are at 7:30 p.m. Thursdays, Fridays and Saturdays through March 17. 1:30 p.m.matinees on March 4 and 11. Tickets start at $21 ($17 for matinees) at paragontheatre.org or 303-300-2210.
Posted by David Marlowe Theatre Reviews at 9:09 AM