The Busy World is Hushed 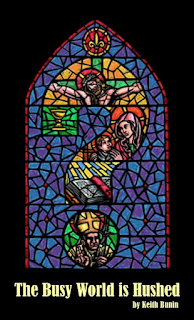 Keith Bunin’s “The Busy World is Hushed” is a thoughtful and deceptively simple play that deals with family, faith and romantic love. In this case that romantic love is homosexual. The play is about many things. Among them is the importance of accepting love in all its manifestations. Among them is the need for extracting what one’s soul knows needs to be tossed in the way of dead misconceptions of the past and moving forward in our lives. Among them is the importance of grieving and letting go and not getting stuck obsessively digging up past hurts, past pains and hollow, empty beliefs. Among them is the need to place a fiery passion for Life in their stead allowing one to forge more of and become more of who he truly is. Among them is understanding that deep in the recesses of one’s soul one knows that the poetry and mythology and the social guidelines of a distant culture’s holy writ are just the very interesting packaging for the concept that love is all that matters. “The Busy World is Hushed” is directed by Bernie Cardell and features very fine performances by Mari Geassair, Tim McGrath and Chris Silberman. There is a superbly appointed playing space featuring clerical furnishings designed by Jen Orf and masterfully built by Mike Uhlenkamp. Luke A. Terry has done some fine work in enhancing the work with a crystal clear sound design. Kudos to Bernie Cardell in his success in maintaining neutrality in his direction. As a result those in attendance will have the privilege of discovering the essence of this very provocative play through whichever facet of the diadem they wish to look. The final line of the play is: “Let’s go and bury our dead.” More than a statement, this is an exhortation to one and all in attendance to let go of the past and move on. Not flimsy, flip or flashy, this play has plumbable depths for the serious theatergoer. In this reviewer’s not so humble opinion this is what theatre ought to be.
Not to be missed.
Ignite Theatre presents the Regional Premiere of Keith Bunin’s The Busy World is Hushed (directed by Bernie Cardell) from March 23 through April 15, 2012 in the Aurora Fox Studio Theatre (9900 East Colfax, Aurora, CO 80010). Fridays and Saturdays at 7:30pm; Sundays at 6:00pm. Tickets: $25 – adults/$16 – students/$12 – groups of 6+. http://lucentperformingarts.org/busyworld.php.
Posted by David Marlowe Theatre Reviews at 7:50 PM