The Drowsy Chaperone
Boulder’s Dinner Theatre: 2/24 – 5/13
The much-lauded 2006 Broadway musical “The Drowsy Chaperone “is currently wowing crowds at Boulder’s Dinner Theatre. As directed by Michael J. Duran the show is an all night non=stop whirlwind of hilarious send-ups of the musicals of the early twentieth century. The show garnered Tonys for Best Book for a Musical, Best Costumes, Best Original Score, Best Scenic Design and Best Featured Actress in a Musical - Beth Leavell. The Drama Desk Awards even gave it the nod for Best Musical. Brian Norber plays Man in Chair, a gay man who is feeling a bit “blue” and turns to his collection of musical theatre records for consolation. As he listens to his favorite, “The Drowsy Chaperone,” he engages the audience in a sort of one-sided dialogue wherein he describes the original cast in glowing terms as well as telling the sordid details of their real lives. It is impossible for the viewer not to fall in love with and wish to take home in his back pocket the adorable rangy, rubber faced Brian Norber who plays Man in Chair. His performance is outstanding and truly steals the show. The scenic design by Amy Campion gives us his dingy apartment out of which emerges an outrageously entertaining Broadway show of the past. This show within a show describes the ups and downs of two young lovers trying to get to the altar. The characters in the show are archetypes including a Latin Lothario named Aldolpho played with excruciatingly funny panache by Seth Caikowski.  Denver/Boulder favorite Ali Dunfee is a stellar stitch as the titular character. Her hand nearly always clutching a Gibson, this actor belts out the song “As We Stumble Along” with a choreographed semaphore of comic brio. Brian Jackson (the groom) and Matthew Peters (the best man) give us some magnificent tap dancing as the groom struggles with his “Cold Feets.” Katy Ulrich’s the bride. As Janet Van de Graff this young actor pulls out all the stops in her show-stopping number, ”I Don’t Want to Show Off.” Director Michael Duran and Wayne Kennedy play The Hairy Brothers, two bald gangsters posing as pastry chefs. Their duet, “Toledo Surprise,” in which kitchen utensils provide a sort of culinary metaphor for tommy guns, is a killer. No really. Joanie Brosseau is hilarious as Kitty, a squeaky dumb blonde babe trying to land an acting role by cozying up to these gangstas and auditioning for roles in shows such as “Swanee Lake.” Neal Dunfee provides his usual magic music directing Boulder’s Dinner Theatre’s luscious live orchestra.
Dopey, daffy, and utterly delightful, this show is so entertaining you will not believe your ears and eyes.
And when you bite into that Prime Rib you won’t believe your taste buds!
Run to get tickets! 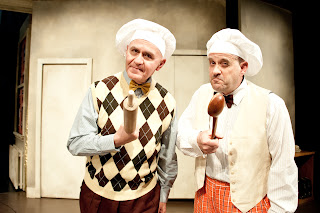 Left to right: Michael Duran and Wayne Kennedy as The Hairy Brothers 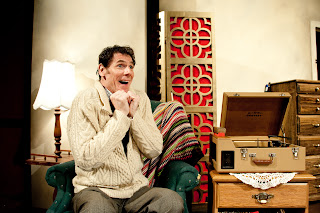 Brian Norber as Man in Chair 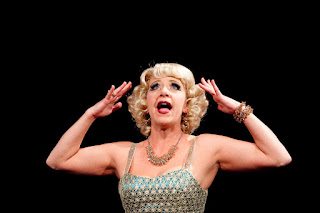 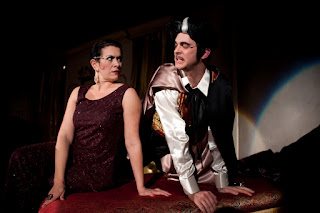