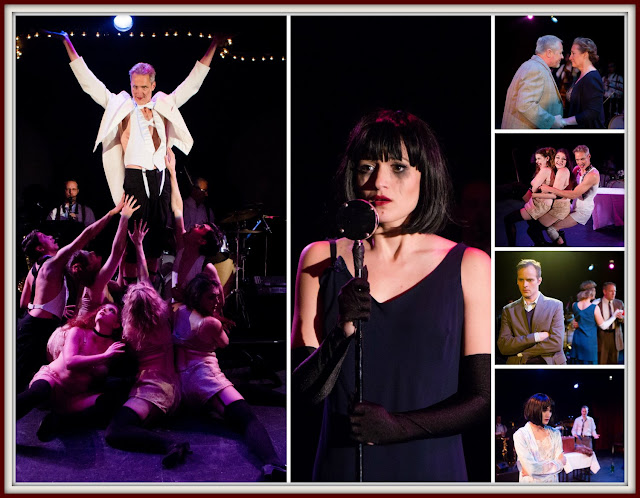 Len Matheo’s astute direction of Cabaret is phenomenal. His casting and pacing along with his ability to use every inch of the stage –even allowing the action to spill out into the audience - is awe-inspiring.
From the moment she arrives onstage Adriane Wilson commands the stage as Sally Bowles. Her first stride across the stage lets us know this is her territory. This actor shines doing sassy numbers such as “Mein Herr” and “Don’t Tell Mama.” When she sings the title song she will wreck you! BRAVA!
Jim Walker is the tallest emcee you may ever have the pleasure of seeing. Leering and looming over the others in the cast, and sometimes even the audience, this actor makes the part his own.
One hopes to see his name in many future programs.
Tender and endearing, Tim Fishbaugh’s performance in the role of Herr Shultz is unforgettable.
Kristen Samu performs the part of Fraulein Schneider with poignant resolve as her character struggles to navigate the social and political turmoil of the day. Ms. Samu's singing of "What Would You Do?" will break your heart.
Alaina Beth Reel’s Fraulein Kost is funny at first, and then becomes terrifying as she belts out “Tomorrow Belongs To Me.”
Rory Pearce’s performance in the role of Herr Ludwig is the kind of brilliant acting in which the actor gets lost in the role. A studied portrayal!
The polished choreography is by Angie Simmons.
Vance McKenzie’s lighting design imbues each scene with the requisite moodiness.
The music direction by Mitch Samu is the professional quality which the Colorado theatre audience has come to expect of him.
How does it get any better than having Steve Klein on bass,Tag Worley on drums, Jeremy Wendelin on woodwinds and maestro Mitch Samu on keyboards?
The intimacy of Miners Alley Playhouse allows this production of Kander and Ebb’s Cabaret to let us feel what happens when heinous things are happening in our world and we “don’t care very much.”
Not to be missed.