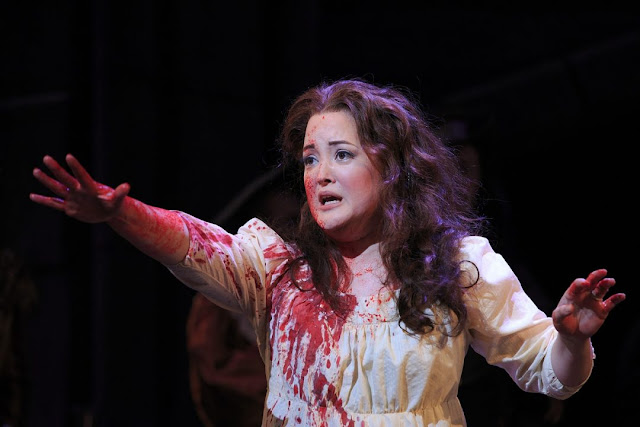 When Gaetano Donizetti composed his masterwork,"Lucia di Lammermoor," he stepped into some big operatic shoes. Rossini had just retired and Bellini had just gone on to er Opera Heaven.

It’s thrilling to get to see and hear “Lucia” onstage at Opera Colorado for more reasons than one. After the last several years of being underfunded the productions of Opera Colorado have suffered. That’s what happens when the money in the coffers is nearly non-existent.

In the parking lot elevator after the show one of the props mistresses heard me going on about how Great the production was. She admitted that she agreed and that it was all because there was now considerably more funding.

That is obvious from the look of the sumptuous set (Robert R. O’Hearn) and costumes (Susan Memmott Allred and Ann Piano.)

However ... the most exciting thing is that artists with superb vocal instruments are being cast.

In this case we have Anna Christy in the title role. Ms. Christy, recently onstage at the Met as well as the Santa Fe Opera and National Opera de Paris, recently stunned audiences with her acting and singing of Emily in “Our Town” at Central City Opera. Ms. Christy’s singing of the coloratura passages in the mad scene in this production of “Lucia” dazzle. Her acting is exquisitely nuanced.
The part of Edgardo is sung with gusto by Eric Barry.
Mezzo-soprano Marcia Ragonetti (Marlowe Award for Best Actress in a Musical for Vintage Theatre’s “Sunset Boulevard”) provides masterful artistry in the role of Alisa, Lucia’s handmaid.
One looks forward to upcoming productions of La Boheme and Falstaff next season.

This production was created for the Florida Grand Opera and made available courtesy of Utah Symphony/Utah Opera.

A tip of the hat to Greg Carpenter who is finding all the keys to the presentation of superb and exhilarating Grand Opera in Colorado.

Posted by David Marlowe Theatre Reviews at 7:33 AM