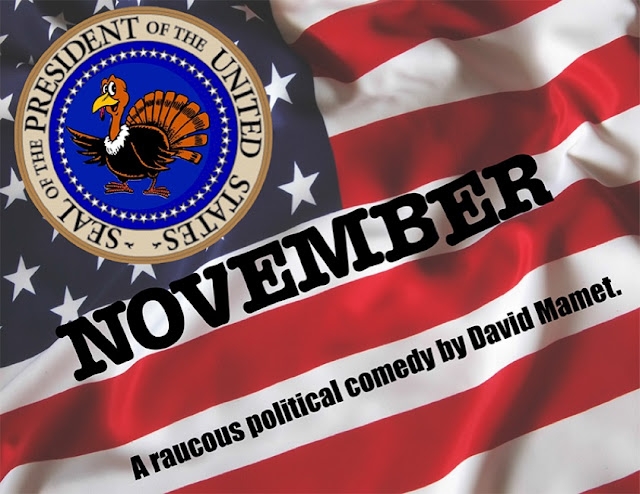 AVENUE THEATER: Through MAY 21

Paced with the fleetness of a speeding locomotive by director John Ashton, “November” is a political satire brimming with hilarious and politically incorrect bon mots, innuendos and obscenities.
The president’s ratings are lower than a snake’s belly and it doesn’t look good for his being re-elected. Political greed, bigotry and incompetence are rampant. In short, he’s fucked up just about everything he’s touched. Sound familiar?
Kevin Hart’s hilarious, rapid fire delivery of President Charles Smith’s political and social ineptitude will take your breath away.
The ridiculous candidates who have created such unfathomable insanity over the last year have infested our living rooms with their ridiculous political debates. Here’s your chance to have a good belly laugh at the expense of these clowns. 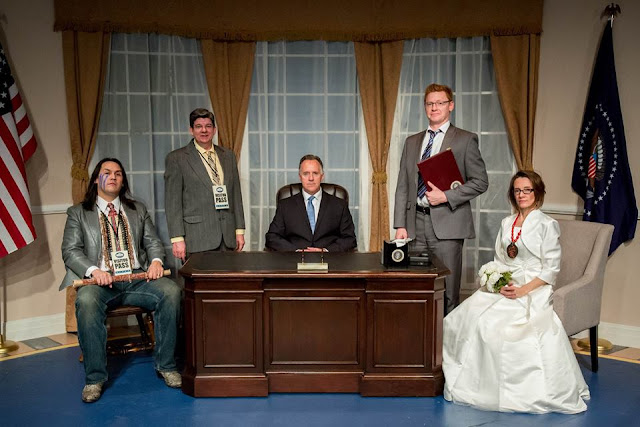 Eric Mather portrays Archer Brown, the president’s advisor, with hilarious tongue-in-cheek decorum as he does his best to counter the farcical hare-brained ideas his boss is constantly promoting. Mather’s consistently foiled attempts to keep the President from stepping any deeper into the political doo-doo provides us with one of the most dynamically expressive ‘straight men’ in memory.
Amie MacKenzie is Bernstein, the president’s beleaguered speech-writer. MacKenzie, who stunned Denver with her portrayal of the canine star of the Avenue’s production of “Sylvia,” provides the only female voice – could it be the voice of reason? - in this male-driven show.
Bernie Cardell turns in a knee slapper of a performance in the role of the Representative of the National Association of Turkey and Turkey Products.
Sam Gilstrap is a heart-stopping stitch as Indian chief Dwight Grackle.
You can expect a fine lighting design by Steve Tangedal and a great scenic design by Ashton, Jeff Jesmer and Patrick Gerace.
In this year of political insanity and incivility NOVEMBER may just be the perfect antidote for election year jitters.  There’s nothing like a peek inside the oval office to discover just how well five brilliant actors can roast politicians!
In fact, you may feel like you’ve just been treated to a couple of hours of deliciously sweet and much needed … REVENGE!Marlowe's Musings

The Avenue Theater is located at 417 E. 17th Avenue in Denver,CO.