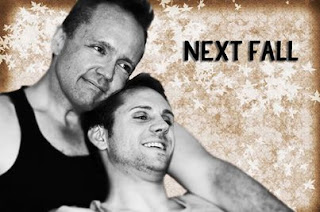 Left to right: Todd Black and Mark Lively
"Next Fall" is the story of a gay relationship in which the lovers have strikingly divergent attitudes about God and Life in general. Thoroughly well written, it’s a play that goes from hilarious to heart wrenching on a dime.Mark Lively and Todd Black magically provide us with two conflicted lovers with whom we as audience fall in love from first glance to final exit. Michael Leopard, Johanna Jaquith and Brian Brooks turn in fine performances in supporting roles.
It is however, Judy Phelan-Hill that you will remember most. This actor’s return to the stage after far too long gives us as audience a sterling performance that is hilarious. Phelan-Hill’s comic timing is impeccable and her command of the stage remarkable.
It’s the kind of thing director Steve Tangedal loves to do most - rip out your heart and stomp on it and then gently put it back in as your exiting the theatre.
it's being co-produced by Firehouse Theatre and Theatre Out Denver. A thoroughly satisfying evening of theatre!

Firehouse Theater and Theatre Out Denver present "Next Fall" running at the John Hand Theater/Colorado Free University, 7653 East First Place, Denver, CO.  Performances are Fridays and Saturdays at 7:30 p.m.; Sunday, September 8 and 22 at 6:30 p.m. and Monday, September 9 at 7:30 p.m. Tickets are $20 Adult; $18 for Students/seniors; $15 on September 9 and are available by calling 303-562-3232 www.firehousetheatercompany.com.   Marlowe's Musings