The Aurora Fox Arts production of Mary Zimmerman’s “Metamorphoses” is utterly entrancing.  Upon entering the auditorium one is regaled with a superb set by Charlie Packard. It’s a superbly designed pool above which a magnificent chandelier sparkles - and in, through and around which, the very fine cast enacts stories taken from Ovid’s classic tales of Roman and Greek mythology. With dazzling lighting by Shannon McKinney and an elegant costume design by Meghan Anderson Doyle the theatergoer is treated to a sublime production that is truly the stuff of dreams. 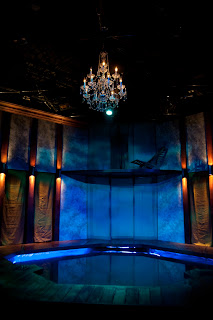 Heraclitus said, “Everything flows. Nothing stands still.” While this goes without saying Mary Zimmerman is more intent on showing us the truth in the old French saying: “Plus ca change plus c’est la meme chose.” (“The more things change the more they remain the same.”
The understanding that Truth is universal and that the lives of the ancients and those of people living today have a great deal in common is one of the underlying thought forms in Zimmerman’s play.
Geoff Kent’s direction is the star of this show. His outstanding use of the space is so fresh, creative and colorful that playwright Zimmerman’s juxtaposition of the classical and the contemporary melds and flows into an exhilarating evening of theatre you will never forget.
Michael Morgan is pure gold as Midas. You may remember Morgan, who is one of Denver’s finest actors, for his outstanding work in Curious Theatre’s production of Donald Margulies’ “Time Stands Still.” 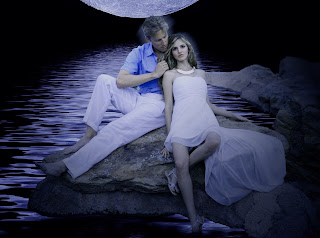 Zachary Andrews and Jaimie Morgan
Zachary Andrews delights in numerous roles. This actor’s northern European good looks complete with fair complexion and blond hair might make one wonder if the gods in Scandinavian mythology had infiltrated the pantheon of Greek gods on Mount Olympus. No one will care though since Andrews is such a great actor. Mr. Andrews, who stunned as Edmund in Germinal Stage Denver’s “Long Day’s Journey into Night,” is an actor to search out in every program.
Narrator Jada Roberts opens the show with a sterling moment in which while stirring the waters of the eye-popping onstage pool, she declares: “Bodies I have in mind and how they can change to assume new shapes.” Later she sparkles in roles such as a winking blue-collar worker and a nursemaid.
Jaimie Morgan’s aerial work above the aquatic stage is breathtaking.
There are many new faces in the cast all of whom this reviewer hopes to see onstage again soon. They are: Carmen Vreeman, Michelle Hurtubise, Justin Walvoord and Ryan Wuestewald,
This production comes with the highest of recommendations from this reviewer’s desk. Tickets are $26 for adults and $22 for seniors and students. For tickets and/or group rates call: 303-739-1970 or visit: www.AuroraFox.org