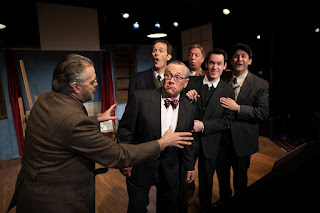 Left to right: Peter David Giffin, Mark Collins, Tim Fishbaugh, Paul Borrillo, Brandon Palmer and Sam Gilstrap. Photo credit to Sarah Roshan
Can working class blokes ever have a real understanding of Art? Could they ever hope to learn how Art is created? Would it be possible for men who work ten hours a day in a dank, dark coal mine ever hope to create Art? These are a few of the initial questions that you’ll find yourself asking as the cast at Miners Alley Playhouse takes the stage.
“The Pitmen Painters” is one of the most engaging evenings of theatre so far this season. It’s a jewel of a play by Lee Hall, the author of Billy Eliot. Based upon a true story, this play about a group of English coal miners in the 1930s has great heart and real humanity. It’s a beautifully written play about a group of miners who arrange for an Art instructor to speak to them about the meaning of Art. When the study of the great paintings of the Renaissance proves a challenge they agree to attempt painting on their own.
Rick Bernstein is at the top of his game with his direction. There’s more than a touch of the poet in the superbly crafted performances he elicits from this cast.
Mark Collins, Jan Cleveland and Paul Borillo stand out in an ensemble that is uniformly brilliant. Mark Collins is outstanding as a man who is finding his way in the world of Art while trying to remain true to himself and the ethics of his new profession. 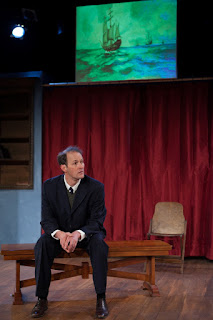 Mark Collins
Photo credit Sarah Roshan
Cleveland’s performance is supremely elegant. Her graceful stage movement and crisp upper class accent provide the perfect contrast to that of these miners turned artists. The return to the stage of Mr. Borrillo is heartening indeed. Those who remember his brilliant work as Uncle Peck in “How I Learned to Drive” and Atticus Finch in “To Kill a Mockingbird” will rejoice in his brilliant performance in the role of Harry Wilson. 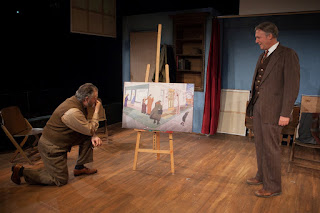 Left to right: Peter David Giffin and Paul Borrillo
Photo credit: Sarah Roshan
The sound design by Paige L.Larson and Jonathan Scott McKean is of the excellent variety. Besides the crisp clear notes of a Celtic fiddle there is an auditory picture of locomotive arriving that excels beyond words.
Caitlin Alexander’s costume design is spot on. The gowns she’s created for Ms. Cleveland are eye-poppers of the first magnitude.
The lighting design and projections provided by Jonathan Scott McKean enhance the production immeasurably.
It’s a heart-opening experience to say the least.  Tears well up more than once in this fascinating discussion of Art and classism.
This production comes with the highest of recommendations from this reviewer’s desk.