Pardon My Dust
The Laundry on Lawrence: through April 6

And Toto too Theatre Company is presenting the regional premiere of “Pardon My Dust” by Anne Welsbacher at The Laundry on Lawrence through April 6. It’s a two-person play about renowned theatre critic Dorothy Parker that features two of Denver’s finest actors:Billie McBride and Paul Page. McBride plays Parker who arrives at a “way station” after her death with lots of baggage.
Paul Page plays the guide in the after life who prompts Parker to come to completion with the way she views herself in order for her to er move on.  Page also plays numerous other males who figured prominently in the late critic’s life.
It’s an interesting concept and if you don’t know the very famous rhyming witticisms of the late great writer you may like this piece more than this reviewer did. However … most of Parker’s bon mots are so familiar one could speak them before the actors do.
This is not to say that there is not much to be mined in a rewrite, which could eventually prove to be the mother lode.
One wishes that the playwright might have chosen one specific time in Parker’s life to reminisce about and illuminate. As it stands the play jumps around from male friend to male friend and experience to experience until one grows tired of following it.
This reviewer wanted either more of a focus on the experience of the Algonquin Round Table or on Parker's gripes about the unfairness of the way Hollywood producers treated screenwriters.
At the risk of being redundant one must reitierate that it would seem that playwright Welsbacher has a good idea, which after a re-write or two could just turn into a really wonderful play. At this point though it’s not ready for prime time.
Go anyway and support Ms. Welsbacher and And Toto too Theatre Company. Susan Lyles directs. 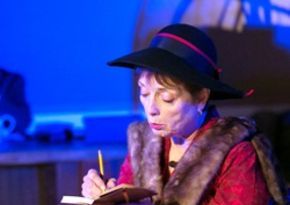