Whether it’s a wake for Prospero or a wake-up call for us all, "Wake" leaves lots of head scratching in its wake.
The reason this reviewer is so late with this review is that every time I sit down to write it a whole new level of interpretation arises and I begin to ponder that one.
So I will just tell you, dear reader, that this work is rich and can be mined at a number of different levels. 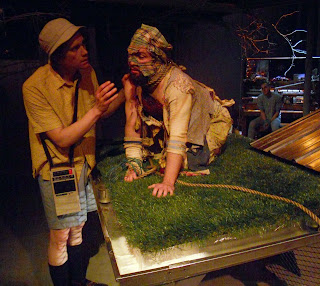 When a patriarch dies leaving only fragmentary instructions on the living of life on the island on which his daughter and slave abide a sense of malaise sets in. Miranda is lonely and bored. Caliban is tethered and tantalized by an invisible (to him) spirit named Ariel.
The boat the late patriarch predicted does not arrive. The skies don’t “pour down stinking pitch.” Nothing ever seems to happen according to the mysterious words of the old one. 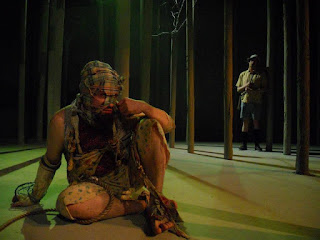 Brian Colonna and Erik Edborg
Prospero is now a ghost who haunts the island. His words instructing his daughter Miranda that all things are ordered in Life forbid her to listen to the end of his soliloquy-now only on tape in the tape recorder he has smashed. These final words are only audible in an incomprehensible garbled gibberish when the tape is pulled through this broken tape recorder.
"Is it real or is it Memorex?" runs through one’s mind. (sorry!)
This amalgam of Shakespeare and Beckett and Buntport is engrossing to say the least. There is more than a little of “Godot” within its borders and a solid undergirding of Sartre as well.
The show is punctuated with electrical noise and electronic music as well as illumined periodically by a star-swept ceiling that appears with the flip of a switch.
The metal runway that stands overhead turns into a sort of slide from which the actors descend  to a patch of astroturf that covers the top of Caliban’s cage.
Invisible to the eyes of Caliban, Ariel tantalizes and provokes him by dangling physical objects above him in the way that one might tease a dog or cat. 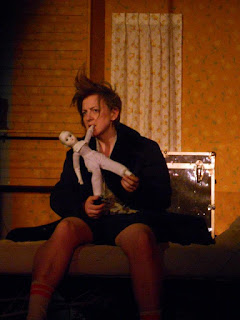 Erin Rollman as Miranda
The viewer finds himself in a sort of awe-struck wonder, then dips into ennui and somehow winds up at a thrilling glimmer of hope. Perhaps it’s a hope that will end in disillusionment but it’s an anticipation born of the self rather than of external authority. It’s a hope that’s founded on the realization that the stories one tells oneself are as important if not more so than those told by those who came before. The piece feels a bit Sartrian since Miranda’s freeing of Caliban by untying and unmasking him allows both of them to take responsibility for their island. That acceptance of responsibility allows for their freedom to discover a Brave New World as they leave safety behind and step into the unknown.
Observing the final moment of the play one can’t help remembering the words of Federico Fellini: “Everything is beautiful to innocent eyes.” 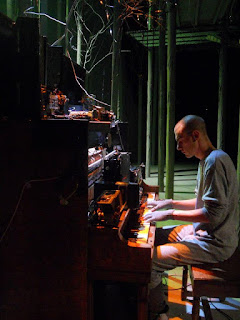