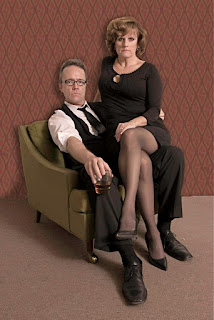 Todd Black and Suzanne Nepi
We sure do love to lie to ourselves. That’s ultimately what Edward Albee, this country’s greatest living playwright says to his audience in “Who’s Afraid of Virginia Woolf.” Everyone in this play is hiding behind a façade of beliefs that masks his or her true experience in life.
Todd Black (George) and Suzanne Nepi (Martha) duke it out in Spark Theatre’s production in a sort of non-stop all night battle filled with verbal combat. This evening in which they rip the scabs off wounds long buried beneath the veil of deceit is one that’s bolstered by a kind of alcohol induced coma out of which all they can do is intermittently strike out physically at one another as punctuation to the eruptions of volcanic rage.
Cast against type, Black and Nepi do a great job keeping us focused on George and Martha’s outrageously dysfunctional relationship.
Director Cardell has cast two relatively new actors in the roles of Nick and Honey-the newest addition to the faculty and his mousey wife.
Nate Axtell turns in a stunning performance as Nick. Axtell is an interesting choice on the part of director Cardell, and this new (to this reviewer anyway) actor delivers a fine reading.
Julie Butters-Wolf gives us a Honey that is childishly oblivious to everything going on around her except for those suddenly lucid moments where she becomes aware and frightened of the Truth.
Luke Terry leads us into each Act with a sensitively well thought out sound design.
Bernie Cardell directs with a keen eye to the excruciating pain of exorcizing a lie as described by Albee’s subtext. Todd Black has never been better than he is here. Suzanne Nepi’s performance is passionate indeed.