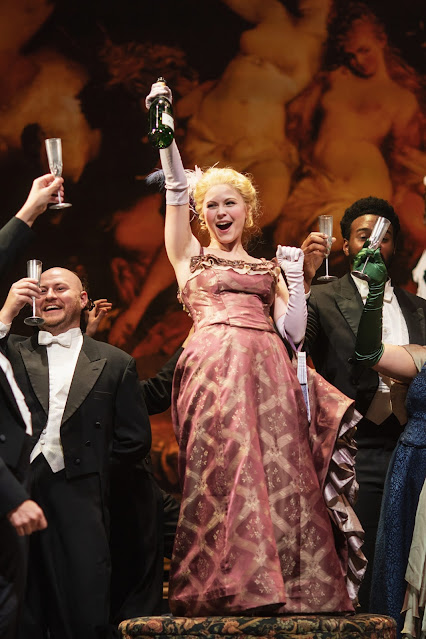 The quintessential Viennese operetta, “Die Fledermaus” has been called the greatest of all musical comedies in the repertoire. This comic operetta composed by ‘the Waltz King,’ involving mistaken identities and practical jokes, was traditionally produced in Vienna on New Year’s Eve.

Dr. Falke is going to take revenge on his buddy, Eisenstein for playing a practical joke on him, which earned Falke the name Dr. Bat.  Eisenstein’s wife, Rosalinde, is still being serenaded by an old flame named Alfred, and her chambermaid, Adele, is using the opportunity to ask for the night off to go partying. Eisenstein accepts Falke’s invitation to a party hosted by Prince Orlofsky (Kira Dills-Desurra), at which his masked wife and her chambermaid turn up as well.

In the end all the hilarious mayhem gets sorted out, practical jokes are avenged and all of it gets blamed on the champagne.

Director Joachim Schamberger has done a superb job in the staging. His casting is impeccable.  Schamberger elicits strong characterizations from his actor/singers all the while emphasizing the festive frivolity inherent in the script.

Dr. Falke is played by Troy Cook. Cook’s rendition of “Bruderlein und Schwesterlein” (‘Little Brother and Little Sister.”) charms. This artist played Captain Von Trapp in the 2014 production of CCO’s “The Sound of Music,” and Germont in its 2015 “La Traviata.”

Rosalinde is portrayed by Hailey Clark. This artist played Fiordiligi in CCO’s 2017 ‘Cosi fan tutte,” and more recently Alma Beers in “Brokeback Mountain” at Stadttheatre, GieBen. Clarke’s singing of “Klange der Heimat” (“Sounds of my Homeland”), while masquerading as a Hungarian countess, is magnificent!

Prince Orlofsky, a wealthy Russian, is portrayed by Kira Dills-DeSurra. This artist’s singing and acting of “Chacun a Son Gout” is just one example of her vocal and acting excellence. Her performance in this role is consistently hysterical, and more than a little bit bombastic. Her accent and comic timing magnificent!

(It is to be noted that peppered throughout the proceedings there are, from time to time, references to our contemporary “fake news” and “oligarchs” that are not only funny but spot on!)

Adele, Rosalinde’s chambermaid, is played by Alisa Jordheim. Gilda in last season’s “Rigoletto,” she also played Fredrika in “A Little Night Music” (2009) and Flora in “The Turn of the Screw” (2012.) In this production Jordheim’s singing of the aria known as ‘the laughing song,’ “Mein Herr Marquis,” is utterly sublime!

The boozy jail keeper Frosch is played with broad strokes of comic brilliance by Curt Olds! This actor is currently cast as Monsieur Andre in the World Tour of “The Phantom of the Opera,” as well as recently having played the emcee in “Cabaret” at Atlanta Opera and Dr. Pangloss in Bernstein’s “Candide” for Opera Arizona.

This is a decadently scrumptious confection that’s so exhilarating, you can’t afford to miss it.  Run to get tickets!

This production is sung in German with dialogue in English.