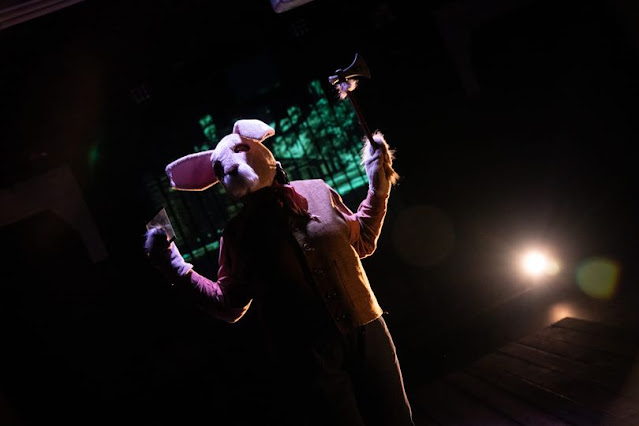 an octoroon is a play

by Branden Jacobs-Jenkins that is an adaptation of Dion Boucicault’s The Octoroon, which premiered in 1859.  Jacobs-Jenkins re-imagines the original, retaining its bare bones of dialogue and action, and uses Brechtian devices to critique the original play’s portrayal of race.

Personally, I had never heard of an octoroon. Apparently, it means a person who has one African great grandparent and seven European great grandparents. (According to the play when one was discovered to be an octoroon, she/he would be sold along with all the other slaves when the plantation was sold.)

This adaptation begins with BJJ, the present-day playwright, recalling a session with his psychoanalyst in which he becomes excited about producing this adaptation. Then there is an argument between BJJ and the original playwright, after which they put on blackface and redface paint. Apparently “many of the white actors have quit.”

Through a series of vignettes set upon the plantation Terrebonne in Louisiana, we meet numerous characters of black, white, and native American descent.

They interact in highly stylized, melodramatic fashion, such that we as audience are kept from feeling the abuse, neglect and general disrespect and violence by the employment of a Brechtian device known as “the alienation or distancing effect. As a result, the audience is hindered from simply identifying itself with the characters of the play. Acceptance or rejection of their actions and utterances is meant to take place on a conscious plane, instead of, as hitherto, in the audience’s subconscious.”

It is, as you may well imagine, quite complex.

If one is unmoved in the watching, as this reviewer was, the essentials sneak into the heart and find their way to one’s tear ducts the following day.

This is the opposite of entertainment. In fact, it’s sometimes annoying and disconcerting.

…And it is intentionally so, following the rules of a Brechtian director.

donnie I betts is an astute director, and you can bet (sorry!) that he’s done exactly what is necessary to create this complex opus onstage. His casting is always on point as well as his choice of techies. betts has directed award-winning productions of Porgy and Bess, Ain’t Misbehavin’,The Color Purple and more.

So please go and experience this whirlwind of images putting racism on trial in a Brechtian fashion.

As complex as it is, this is a fascinating work. The commentary on (and condemnation of) “folk” tales such as the Uncle Remus stories told by Joel Chandler Harris, and represented by Brer Rabbit in the show, is unmistakable.

Go and support Benchmark Theatre as it continues its crusade against racism.

For tickets go online at benchmarktheatre.com

Posted by David Marlowe Theatre Reviews at 7:15 AM