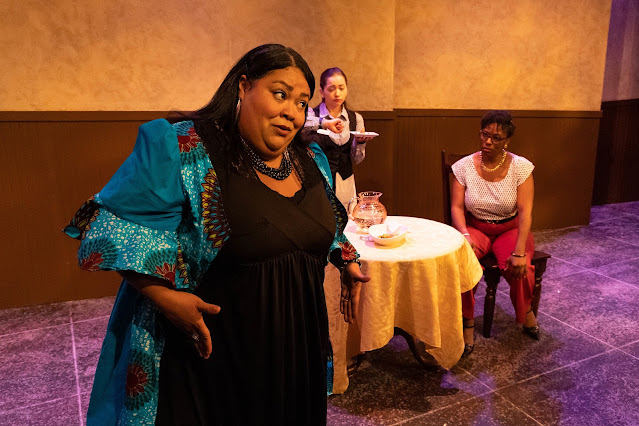 BLACKADEMICS is a brilliant example of edgy absurdist comedy dealing with white supremacy and layered with dark satire.

At the start of Idris Goodwin’s play two female African American educators arrive at a special restaurant at which they have reserved a table. Their dinner is to be a celebratory one, and the two women are famished. Once they’ve both arrived there seems to be no way out.

Ann appears first. The usual restaurant furnishings being absent, she takes out her phone and begins checking her mail.  Shortly thereafter, Georgia, the white waitress, arrives, introducing herself, and taking Ann’s phone. Georgia assures her that it will be returned after the meal.

Not long after the waitress disappears, Rachelle arrives.  Both Ann and Rachelle greet each other and then begin to wonder why the restaurant has no furnishings. There is a lot of banter between the two guests regarding their experiences in the world of academia, which is punctuated periodically by the arrival and disappearance of the smarmy, waiter.

When the waiter brings in a table and/or chair, the two women compete for a chance to sit down.

What started as a cozy meeting, becomes a raucous battle of wits, punctuated intermittently by the unsettling arrival and disappearance of the waiter.

What started as a seemingly pleasant evening dissolves into one of “endurance cuisine.”

One hesitates to say more about the action, so as not to give too many spoilers.

Let me just say that Mr. Goodwin’s play may cause the theatregoer to reflect on Sartre’s NO EXIT, where Hell is other people, and Bunuel’s award-winning screenplay for THE DISCREET CHARM OF THE BOURGEOISIE, where it’s nearly impossible to have dinner.

Tobi Johnson-Compton is an affecting, slightly stuffy Ann.  Chelsea Frye is delightfully exuberant as Rachelle, the woman from Omaha. Stephanie Saltis is just right as the insufferably arrogant and annoying waiter.

One hopes to see all three of these women onstage again soon.

Director Betty Hart is at the top of her game here. Hart’s ability to get this cast to unveil so many levels of Mr. Goodwin’s rich, disturbing text, is remarkable. Her directorial concept may well be:

Posted by David Marlowe Theatre Reviews at 11:26 AM