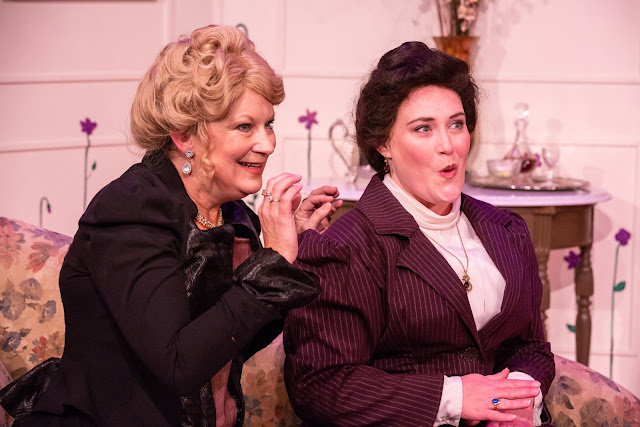 Playwright David Mamet is perhaps best known for writing “Glengarry Glen Ross” (Pulitzer Prize), “American Buffalo” and “Speed-the-Plow.” Word has it that this oft considered misogynist playwright, whose plays are primarily male-driven, was once challenged to write a play about women. The result is said to be “Boston Marriage.”

“BOSTON MARRIAGE” centers on two women, who, living together in Victorian times, are doing their best to live a life “on the fringes of upper-class society.” Anna, the older of the two women, is the mistress of a wealthy man who gives her jewels and a nice income. Claire, the younger of the two, has become infatuated with another young lady, and seeks Anna’s help in ‘sealing the match.’  When Claire’s new “friend” appears on the scene, the prosperity of Claire and Anna is put at risk.
Catherine, the maid, is the only other character.
Director Lorraine Scott has cast the play impeccably.
The play contains three Bravura performances by Michelle Moore, Kelly Uhlenhopp and Jean Schuman, with Ms. Moore delivering a tour de force.
Kelley Uhlenhopp portrays Claire with pluck and luminosity.
As the scorned and much-maligned Scottish maid, Catherine, Jean Schuman is by turns, hilarious, pitiful and finally triumphant.
The technical aspects of the play are especially well done, barring one glitch in the lighting apparatus at the top of the play.
Susan Rahmsdorff-Terry’s eye-popping costume design is spot on!