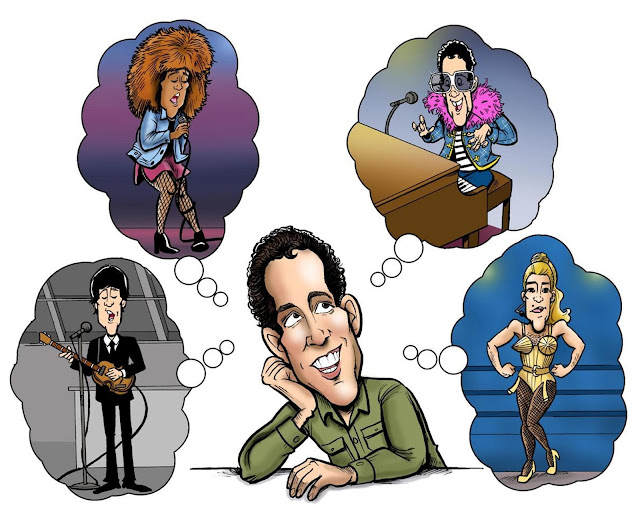 “Baby Boomer Baby” is a One

Koenig. This actor has appeared

in Mel Brooks’ "Dracula: Dead and

Loving It" and "Robin Hood: Men in

Tights" as well as "Boston Legal,"

" Miami Vice and Not Necessarily the

The show is a hilarious and nostalgic evening of theatre in which, this actor shows us how the music of the last several decades has defined us both as individuals and as a nation.
You'll love his hilarious caricatures of Madonna, Elton John, Tina Turner, Billy Joel and many, many more.
Besides his impersonations of everyone from Paul McCartney to Lady GaGa, you’ll also hear some original music and very funny lyrics!
All Koenig has to do is spin around and put on a wig to recreate his unique take on these iconic stars.
The show does get a little preachy at final curtain regarding the belief that “All You Need is Love.” However… it’s couched in Mr. Koenig’s craving to extend whatever positive vibes he can to soften the blows we receive daily regarding what 45 and his cohorts are doing to vilify our Democracy.
So for that reason alone this reviewer found ‘preachy’ not only acceptable, but endearing.
Go and enjoy!Marlowe's Musings

Posted by David Marlowe Theatre Reviews at 6:04 AM