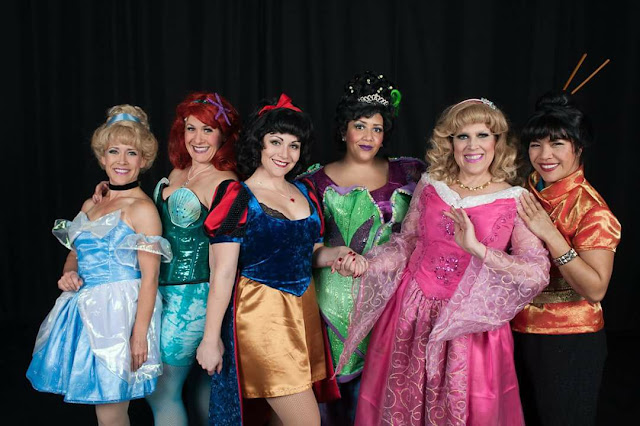 Happy Ever After isn't all that it’s cracked up to be in the hilarious hit musical, “Disenchanted.” Now on view at BDT Stage, this musical is a kind of reality therapy for the Disney princesses who thought that everything would be coming up roses for them after that first magical kiss. However…that was Once Upon a Time and now the royal honeymoons are over.

With music, lyrics and book penned by Dennis J. Giacino, the show was a big hit off Broadway being nominated for the 2015 Outer Critics Circle Award for Outstanding Off Broadway Musical as well as a 2015 Broadway Alliance Award for Best New Musical. Now Michael J. Duran, the artistic director of BDT Stage, wisely brings it to the Colorado audience.

It’s deliriously funny material that’s brought to life by the most talented and beautiful ladies of the BDT Stage family.
Jessica Hindsley is adorable as Snow White, the ring leader of this posse of princesses. Broadway veteran Tracy Warren is the bambi-like waif, Cinderella. Annie Dwyer(Marlowe Award for Frau Brucher in Young Frankenstein) is utterly hysterical in her portrayal of Sleeping Beauty. MariJune Scott performs the roles of Hua Mulan and Pocahontas/Jasmine in this royal vaudeville with great good humor. Alicia K. Meyers(Marlowe Award for Thoroughly Modern Millie) is The Little Mermaid and Belle, a girl who’s dating a guy with mange and having conversations with her bidet. The super-talented Anna High(Marlowe Award for Serena in Porgy and Bess) is the Princess Who Kissed the Frog.
Shhhhhhhhhh! Either Scott Severtson or Seamus McDonough provide a deliciously comic surprise at one time or another in this sassy, irreverent and hysterical production. Wait for it! On the night this reviewer was in attendance Mr. McDonough stunned.

Huge gratitude must be extended to Neal Dunfee for his outstanding conducting of the just off (and above) stage orchestra.
Alicia K. Meyers directs and co-choreographs the proceedings with Matthew D. Peters.
Linda Morken’s genius is once again on view in her spot-on costume design. Morken’s work is always eye-popping. However…you will have to see these costumes to believe how ingenius they are! The hilarious one for Marijune Scott as Princess Jasmine is a case in point.
Brett Maughan and Seamus McDonough bless us with their superb lighting as Amy Campion delivers yet another glorious story book set design.
For this show one has to mention Debbie Spaur whose expertise in the Hair and Wig Design department enhances the show immeasurably.
One would be remiss not to mention Eva Wheelock, the talented Executive Chef in BDT Stage’s kitchen. Delectable prime rib and pork chops on beds of ravioli, not to mention tasty hors d’oeuvres and sinfully delicious desserts make the dinner portion of the evening scrum diddly!
I’m told that there’s already been a lot of repeat attendance so run to get a ticket now! It’s silly and fun and gets your mind off the insanity of the five o’clock news. How does it get any better than that?

Even though the show is hysterically funny for adults, you can leave the kiddos at home. Adult themes and language send up Walt’s animated princesses with spark and panache making this production unsuitable for the little ones. So take all the adults on your block instead and laugh your proverbial asses off at BDT Stage’s  DISENCHANTED!

Posted by David Marlowe Theatre Reviews at 6:09 AM