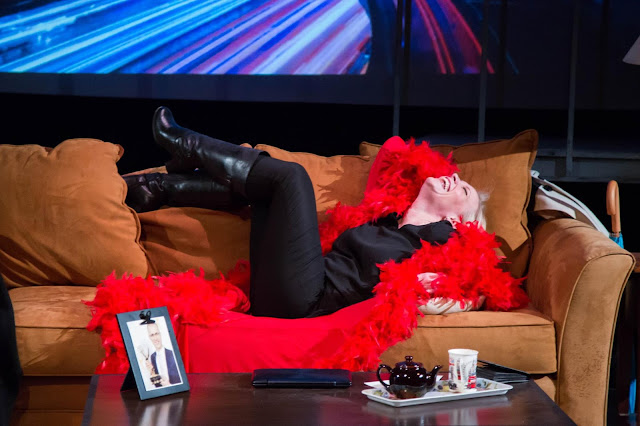 “Tell Me On a Sunday” is a one-woman musical featuring music by Andrew Lloyd Webber and lyrics by Don Black, starring Megan Van De Hey and directed by Robert Michael Sanders. It’s a one-act song cycle about an English woman whose search for romance moves from New York City to Hollywood and back to Manhattan.
In 1985 Bernadette Peters won the Tony Award for Best Actress in a Musical for her performance as ‘Girl.’
Perhaps the least self indulgent of Lloyd Webber’s works, “Tell Me on a Sunday” is an intimate and realistic look at a young woman who’s lonely and looking for love.
Excelling in her solo performance, Megan Van De Hey dazzles us with her virtuosic singing and acting.  Van De Hey is accompanied by esteemed music director Trent Hines.
“Take That Look Off Your Face,” "Capped Teeth and Caesar Salad” and “Tell Me” are just three of the memorable songs.
The look of the production is sensational. With expert scenic design by Richard H. Pegg, lighting design by Steven Tangedal and projection and sound designs by Tom Quinn, “Tell Me on a Sunday” is stunning.
Classy and sophisticated, this is theatre that’s a cut above! Thanks to executive directors John Ashton and Abby Boes The Avenue Theater has returned to its original glory. Brava! Marlowe's Musings

Posted by David Marlowe Theatre Reviews at 9:31 AM