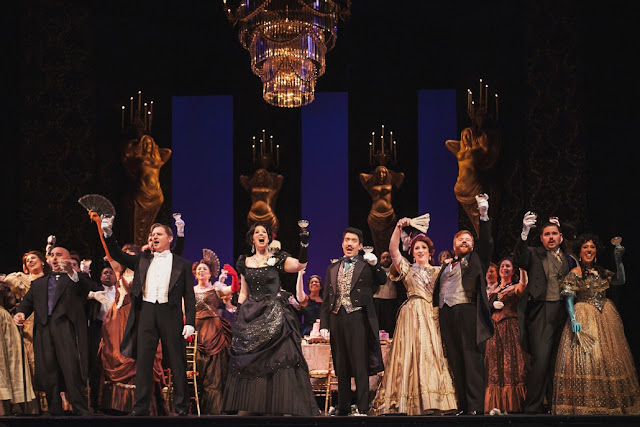 Whether you’re a jaded culture vulture or an opera virgin,
Central City Opera’s production of  “La Traviata” provides orgasmic bliss for the ear, the eye and the heart!

Directed with a woman’s touch by Elise Sandell, this production of “La Traviata” is imbued with a tenderness that could find its way to your heart and tear ducts for several days thereafter.
The soaring soprano and sparkling vivaciousness of Ellie Dehn’s Violetta ravishes us.
The dashing tenor Ryan MacPherson commands more credibility as Alfredo than any other singer to have been seen – and heard in the role - by this reviewer! 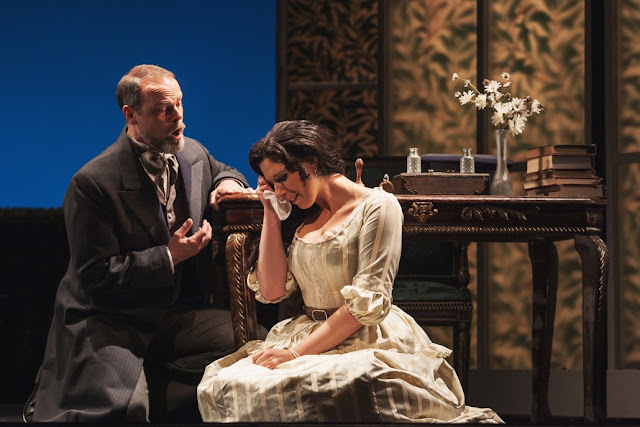 Troy Cook’s phenomenally robust singing of Alfredo’s father, Giorgio Germont, stuns!
Harnessing the magic and the mystery of Verdi’s composition, esteemed conductor, John Baril keeps the voices on stage and the scrumptious Central City Opera Orchestra in the pit in an alignment that’s superbly balanced.
Chorus Master Adam Turner leads the chorus made up of 21 soloists to an utterly intoxicating triumph.
The sumptuous scenic design for Violetta’s soiree at the top of the show as well as that of the party she attends at Flora’s after her devastating encounter with Alfredo’s father are two of the dazzling highlights of this production. The costume design is replete with gowns that dazzle us with their shimmer, sparkle and glitter.
Seldom in this reviewer’s experience has Verdi’s triumvirate of characters received such a balanced embodiment by actors who can act as well as they sing.