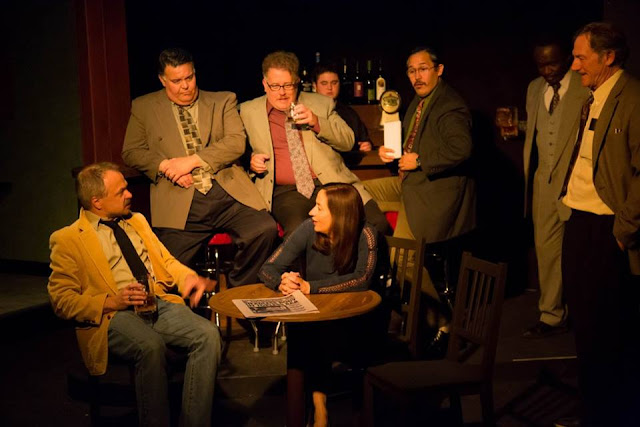 The cast of "Lucky Guy"
“Lucky Guy” is the final play written by Nora Ephron before her death in 2012. The Broadway production starring Tom Hanks received six nominations for the Tony in 2013. Ephron, who is best  known for her writing of romantic comedies had already received nominations for the Oscar for best screenwriting for “Sleepless in Seattle,” “When Harry Met Sally” and “Silkwood.”
Married to journalist Carl Bernstein who, played a key role at the time of the Watergate scandal, it’s no wonder her fascination with the world of journalism led her to write a play about the ups and downs of the career of Pulitzer-prize winning columnist Mike McAlary.
Director John Ashton, who is no stranger to the world of the daily news himself, has cast this production with actors you will believe are journalists. It’s a fast-paced testosterone-driven production, which may put one in mind of Mamet’s “Glengarry Glen Ross.”
It’s the end of an era. The final gasps of a time of ink-stained fingers and tapping typewriters as electronic media upstage the news scoops with super cyber swiftness.

Andrew Uhlenhopp delivers a powerful high-octane performance in the role of famed tabloid columnist Mike McAlary. This lucky guy, who always wanted to write a newspaper column in NYC from the time he was a boy, goes from newsroom nobody to the winner of a Pulitzer Prize with all the requisite hard knocks along the way.

Kevin Hart is outstanding in the role of the slick, smooth, well-dressed lawyer Eddie Hayes who represented Macalary when he made some bad judgment calls. Hayes’ famous quote to all the reporters he represented was: “I can get you outta anything.”

The set design by Christopher M. Waller gives us a realistically cluttered newsroom and neighborhood bar(s) in which the reporters carouse after work.
Ren Manley’s sound design bridges the scenes with moody laid-back jazz.
Cancel whatever you have on your calendar for Saturday night and get a ticket while you still can.       Marlowe's Musings