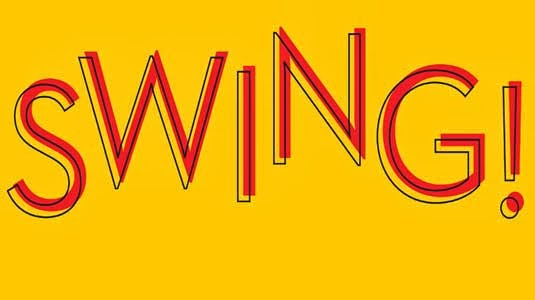 The best of four productions of this musical to have been seen by this reviewer, Town Hall’s “SWING” knocks it out of the park!
Matt Peters’ direction is very fine. His choreography stuns!
Rae Klapperich’s dancing is exhilarating eye-popping magic! Lithe, limber and lovely! How does it get any better than that? 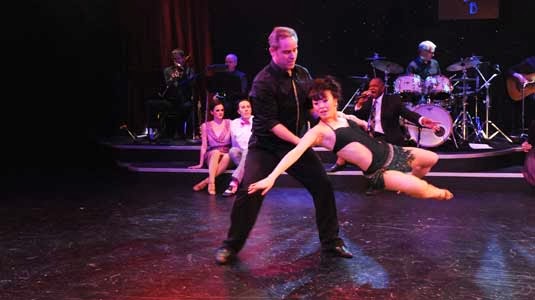 Stephen Bertles is the Rock of Gibraltar over, under and around which Ms. Klapperich dives soars and sparkles throughout.
Raven-haired beauty Ronni Gallup, who stuns in the dancing of numerous routines, gives us true star quality.

Tracy Kern and the male ensemble of "Swing"

Tracy Kern unleashes her glorious soprano alongside Darren Kramer’s ultra- smooth virtuoso trombone until the rafters rattle with “Cry Me a River.” 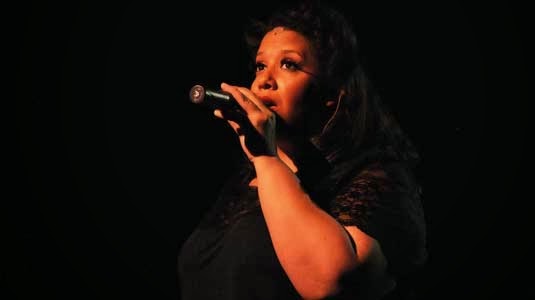 Anna High soars with her rich, sonorous renditions of such golden standards as “Blues in the Night” and “I’ll Be Seeing You in All the Old Familiar Places.”
Seth Caikowski enhances the production ginormously with his great voice and sparkling comedic presence. Who knew he was a maestro of the ukelele?
Whether singing such well known numbers as “Boogie Woogie Bugle Boy” or singing and dancing in ensemble moments, the multi-talented Matt La Fontaine is always engaging.
Seth Alison’s lighting design dazzles!
Most of the costumes created for SWING show off the glorious bodies of the stars to a fare thee well and are sparklin’ spot on! (Well, except for the ones in the Country Western number.)
Although he’s great when scattin’ with Traci Kern in “Bli-Blip” Demetrius De Thomas needed to be miked better to keep up with this cast of power-house singers and dancers.

Donna Debreceni’s stage band, which is onstage throughout, goes from cookin’ swingin’ jazz to laid back, steamy blues in a New York nano-second.
One would be remiss not to mention with huge praise the reeds of Rob Rebholz, the trumpet of Rob Reynolds, the trombone of Darren Kramer, Scott Alan Smith’s guitar/bass and Tag Worley’s drums/percussion. This band is musical theatre gold.
For you, dear reader, it simply means entertainment that’s the Mother Lode!

Note:(If there were one other criticism of this show it would be regarding those floating cardboard notes that hang uselessly above the audience. Puh-leaze take them down and return to Beyond the Blackboard. Hopefully you still have the receipt.)