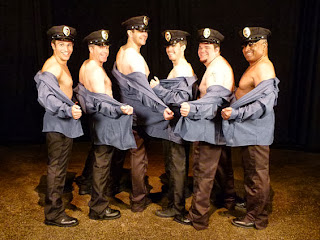 “The Full Monty” is a big-hearted musical about a bunch of average Joe blue-collar steelworkers who are depressed because they’re out of work and because their wives are high on ogling a group of touring male strippers. You gotta know that this is real Honest To God great acting because there is nothing about the cast and crew at Boulder’s Dinner Theatre that’s “average” anything. What you get when you go to BDT is high wide and handsome in every way imaginable!
The play centers on Jerry, a lovable guy who’s just found out he’s about to lose custody of his son. His response is to round up the guys in the neighborhood and talk them all into starring in a strip show to make some bucks and shore up their reputations for being gutsy guys who just happen to be down on their luck.
Seth Caikowski turns in a stellar performance in the central role of Jerry Lukowski. The song: Breeze off the River” Jerry sings to his son Keno is truly heartfelt and moving.
Joel Adam Chavez is touching and funny as David Bukatinski, Jerry’s pudgy buddy.
Scott Beyette, who also directs the show, is Harold Nichols, a former boss of this crew and who’s gonna teach the guys how to hoof it while they “Let it Go” onstage.
The always-outstanding Joanie Brosseau portrays Nichols’ wife Vicki with a sparkle and flair that astounds.
Shelly Cox-Robie plays Jeanette Burmeister, the tough and lovable showbiz accompanist with her own indelibly endearing musical theatre stamp.
Brett Ambler’s Malcolm McGregor is introduced in ”Big-Ass Rock,” a darkly comic number about a botched suicide from which he’s saved by Jerry and Dave. Malcolm is saved again by Burke Walton’s Ethan (the Donald O’Connor wannabe) in another moment of grief later in the show.
Robert Johnson’s Noah “Horse” T. Simmons gets to let it more or less all hang out figuratively speaking in his showstopper, “Big Black Man.”
Even the supporting cast is full of stars: Jessica Hindsley, Alicia Dunfee, Amanda Earls, Bob Hoppe, Matthew Peters, Tracy Warren, Scott Severtson…The list goes on and on!
Neal Dunfee’s conducting of the just offstage BDT stage orchestra is phenomenal.
Although what goes on is less important in many scenes than what comes off Linda Morken’s costume design is spot on. Oh and don’t be surprised if you see a lot of ‘ladies night out’ ladies with their eyeballs pasted to the…er stage.
It's awesome fare onstage and on your table!
Go! Go! Go! Go! Go!Marlowe's Musings


Tickets for The Full Monty are on sale now. Prices start at just $37, and include both the performance and dinner served by the stars of the show. All tickets for opening weekend (Friday, September 6 - Sunday, September 8, 2013) are just $37. Group rate tickets and season subscriptions are available for all performances throughout the year. Call (303) 449-6000 or log on to www.bouldersdinnertheatre.com for reservations and/or additional details about the show.