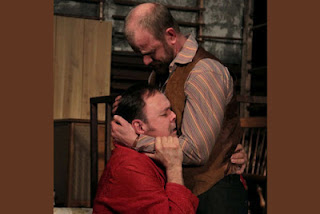 
Michael Cristofer’s “The Shadow Box” was the Pulitzer Prize and Tony Award winner for Best Play in 1977. Rick Yaconis has directed a fine production of Cristofer’s play in the brand new space housing The Edge Theatre Company at Teller and Colfax.
The matrix for the play is the observation of three terminally ill people living in cabins on the grounds of a hospital. Joe, Brian and Felicity are the three patients.
Paul Page is superb as Brian, a gay man who, when visited by his former wife, attempts to keep up appearances with a smiling mask that’s slowly slipping to the tragic. Patty Ionoff is brilliant as Paul’s ex-wife, one of the most floridly annoying characters you may ever encounter in a play. Brava! Brock Benson’s portrayal of Mark, Brian’s gay lover, is outstanding.  His ability to communicate to us as audience the steaming rage of a man who is being encroached upon by this insufferable woman is phenomenal. Page and Benson’s acting duet describing their emotional meltdown is indelible and unforgettable.
Michelle Grimes plays a daughter who is unable to release her mother to the inevitable. Carol Bloom shines as Grimes’ character’s dying mother who’s choosing to hang on to life because of lies and cruel hopes about a deceased daughter’s imminent return.
Marc Stith plays a man who finds it difficult to face his eventuality and express the truth to his son and wife. Haley Johnson gives us a sensational characterization of his devastated wife. Paul Escobedo shows great promise in his portrayal of their son, Stephen.
As the interviewer, Kirk Montgomery provides stunning voice over work as the detached voice of medical science. Although this omniscient and omnipresent character is never seen the questions expressed in the methodical observation of his experiment provide exaggerated contrast to the humanity of these traumatized patients and their families.
The scenic design by Remigio S. Velez II includes the exterior of a rustic cabin, as well as a backyard and one cabin’s interior. His set gives this intimate venue the illusion of having a sprawling stage. It’s phenomenally well done. However … the size of the set sometimes makes the eye unsure of which way to travel especially when two areas are illuminated as one scene ends and the next begins.
This play allows us to feel the anguish of people who are unable to understand what’s killing them. This was before there was even the prognosis for what was soon called “Gay cancer,” and which was soon to be known as AIDS. It’s a compassionate and saddening glance into the rear view mirror across the decades of death and devastation this epidemic spawned.