The Man Who Came To Dinner
Spotlight Theatre: Through December 22

George S. Kafman and Moss Hart debuted their new play, “The Man Who Came To Dinner” in 1939.  Set in a small town in Ohio shortly before Christmas, the show is an ideal choice for bringing community theatre mavens together at the holidays.
As the show begins Sheridan Whiteside, acerbic wit and critic has fallen on the ice outside the home of Ernest Stanley. Whiteside is the man who was coming to dinner at the Stanley home and who stayed for a good long time.
The show references countless stars and celebrities who were famous at the time of its writing. Younger audiences may be a bit at sea as Whiteside rattles on about all his famous chums but older audiences will relish those references.
The cast and crew are made up of the entire board of directors of Spotlight Theatre. So fans of co-directors Bernie Cardell and Pat Payne will enjoy themselves immensely.
The evening is thoroughly enjoyable if one may add ‘a bit over the top.’ Most theatergoers won’t know that Beverly Carlton was modeled after Noel Coward or that Banjo was modeled after Harpo Marx. Charlie Wingerter and Luke Allen Terry create their own very enjoyable versions of these characters with their very own unique styles. However … Molly Killoran is perhaps the best at nailing the era and the actor (Gertrude Lawrence) after which her character is modeled.
Dan Connell creates a very enjoyable Sheridan Whiteside. This reviewer’s one criticism might be that it would be wise to slow down those great old lines so that a drop of venom lingers on the lip each time. We want to savor the insidiously hilarious moment.
Todd Black, Deborah Curtis and The Jaquiths, Paul and Johanna, are all fine in their various roles.
Katie Mangett’s Mrs. Stanley is a complete and utter joy. Her facial expressions along with her bird-like physical responses to the tragic occurrences are pure gold.
Linda Suttle is hilarious as an eccentric clothes horse who is the sister of Mr. Stanley. Peggy Miller adds immeasurably to the mirth on stage with her portrayal of the Stanley's cook, Sarah.
It ain’t perfect, but for the price you can’t beat seeing Dan Connell skewer the Ohio bourgeoisie as pissed off critic Sheridan Whiteside. 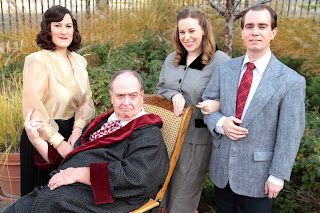 See it or get coal in your stocking!