Denver Center Attractions has a real winner on view at The Buell Theatre.

“Jersey Boys,” the musical about the rise of Franki Valli and the Four Seasons, that took home the Tony for Best Musical in 2006 is currently causing sold out houses to go crazy with their applause as early as a quarter of the way through this show.

The performances, especially those of Brad Weinstock (Franki Valli) and Jason Kappus( Bob Gaudio), are outstanding.

Visually the show is a knock-out with a Tony Award-winning lighting design by Howell Binkley that is spectacular.

The sound of the show is off the charts musical theatre heaven from the vocals to the instrumental interpretations of such pop classics as: “Sherry,” “Big Girls Don’t Cry” and “Walk Like a Man.”

This show is electrifying! 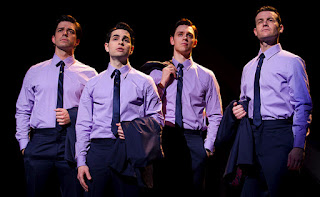 The cast of "Jersey Boys
Buy tickets at www.denvercenter.org