Alicia Dunfee does a great job of directing the show. Dunfee has chosen to give it a slower pace than one is used to at this venue. It’s perfect for the children. This is a show that is shorter than usual and allows for Mom and Dad to get the kids home to bed at a decent hour. The show is delivered with broad strokes of humor. The choice to have the ugly stepsisters played by two actors in drag adds great good humor. 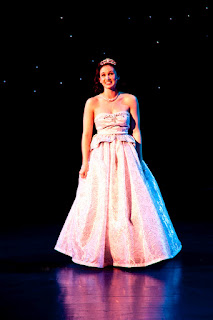 Jenna Bainbridge is utterly adorable as Cinderella. Her vocals are exceptionally well done and her stage presence is enchanting. Ms. Bainbridge has been seen in lots of PHAMALy productions including Belle in that company’s version of “Disney’s Beauty and the Beast.” Here she lights up the stage with an unforgettable performance.

Matthew Dailey is a handsome Prince Christopher. Mr. Dailey’s vocal prowess is remarkable and his acting superb. The Denver audience has seen him in countless productions growing up in the Denver theatre including young Guido in “Nine”and most recently in The Arvada Center's "Chess."
The duets sung by Ms. Bainbridge and Mr. Daily, “The Sweetest Sounds,” “Ten Minutes Ago” and “ Do I Love you Because You’re Beautiful?” are musical theatre ice cream.

Director Dunfee does double duty in this production. She also does a fine job of portraying the Fairy Godmother singing the ever-popular “Impossible.”

Playing against type, Shelley Cox-Robie has been cast as Cinderella’s Stepmother. Cox-Robie plays everything brilliantly. However… one does question casting an actor with such a brilliant aura in this role. Her exquisite face and physiology speak volumes … and what they speak is not anything related to one’s childhood memories of this character.

Tracy Warren and Wayne Kennedy give us a nice counterpoint with their portrayals of Queen Constantina and King Maximillian respectively. 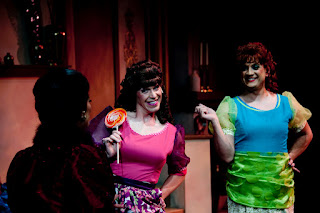 Bob Hoppe and Matthew Peters portray the ugly stepsisters with a klutzy gauche self-absorption that is hilarious. They give the audience’s funny bones a good whack with their sidesplitting rendition of “The Stepsisters Lament.”

Seth Caikowski manages to give an appealing reading to the part of Lionel, the royal herald. His singing of “The Prince is Giving a Ball” is hilarious. It was also a nice touch to have Lionel spraying the glass slipper with Lysol after each stepsister partially inserted her stinky foot.

One must not forget to mention the incredible menu provided at this venue. There is a special offering of Mac and Cheese for the sticky fingered gang! For the step parents (just kidding!) BDT offers the hugest most succulent Shrimp Cocktail as well as Prime Rib (I get it gently mooing!) to die for. And just so you know... BDT’s kitchen won a big prize for their Key Lime Pie. The fully stocked bar can provide Mom and Dad with all the adult beverages they require.

Tickets for Rodgers and Hammerstein's Cinderella are on sale now. Prices start at just $35, and include both the performance and dinner served by the stars of the show. All tickets for opening weekend (Saturday, May 19 and Sunday, May 20, 2012) are just $35. Family 4 Paks, starting at $25 per ticket, are also available for performances dated May 23 through July 8, 2012. Group rate tickets and season subscriptions are available for all performances throughout the year. Call (303) 449-6000 or log on to www.bouldersdinnertheatre.com for reservations and/or additional details about the show.
Boulder's Dinner Theatre presents four Broadway-quality musicals each season, and has been recognized locally and nationally for theatrical excellence. BDT’s 34th year concludes with Rodgers and Hammerstein's Cinderella May 19 - September 1, 2012. BDT's 35th season begins on September 7, 2012 with Avenue Q, followed by 42nd Street, the regional p
Posted by David Marlowe Theatre Reviews at 10:53 AM