Peter Pan
Ellie Caulkins Opera House: 2/24 – 3/4
The Colorado Ballet has produced an exhilarating new ballet for children of all ages. Thanks to Gil Boggs, Artistic Director of The Colorado Ballet, youngsters get to experience a ballet that soars. Michael Pink, the choreographer of the much-loved ballet, “Dracula,” has succeeded once again in giving the ballet audience a work that is cinematically inspired. Where Pink was evoking memories of the horror genre with the Count, here he leans into the world of the cinematic fairy tale. Thanks to Pink the repertory is expanding to include images and characters recognizable to young audiences set to music that feel and sound familiar, too. Philip Feeney composed the enchanting score for this ballet. It’s as light and freeing, as his music for Dracula was ominously dark. David Grill’s lighting design illuminates the proceedings with a touch that brings out all the magic in the story. Rick Graham’s scenic design allows this return to childhood to be as simply delightful as turning the pages of a child’s storybook.  Both the children’s bedroom and Hook’s ship are superbly envisioned. Adam Flatt’s conducting of the Colorado Ballet Orchestra paced the proceedings in such a way that youngsters – and those of us who are simply young at heart - would be able to lose themselves in the story. There are a few changes one might wish to see. Captain Hook could be directed to be much more hilariously flamboyant. When he makes his final belly flop off the plank one wishes to know that he was Crock-bait, too. That was unclear. Also the reprise of the Indian maidens with the blankets was de trop. Once was enough. It was very creative to have the crocodile swimming along over the pit. However… besides the fact that it was hard to see the crocodile sitting in the orchestra, it would also be more impactful to the story and the characters therein if it were upon the stage. The flying effects provided by ZFX, Inc. are astounding! The circling of the top of Big Ben a dizzying feat of artistry! Maria Mosina is a goddess! Her terpsechoric portrayal of Mother is studied and accomplished. Brilliant! Alexei Tyokov’s performance as Father is magnificent and hilarious all at once. Shelby Dyer’s Wendy is superb. Sharon Wehner turns in yet another fine performance as Tinker Bell. The show as a whole is simply breathtaking! 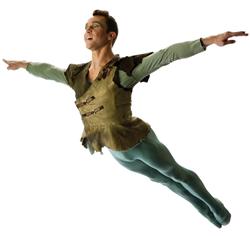 My dear friend and colleague, Holly Bartges passed away this week. She will be greatly missed. Holly had one complaint about productions of “Peter Pan” and made no bones about it. “Peter is a boy,” she would say. It didn’t matter how many Mary Martins there were in the world … “Peter Pan is a boy!” Well finally someone got it right, Holly. And as you soar off into your Heaven of a Neverland we salute you with love and gratitude for having had the honor and the pleasure of your company here on earth. Here he is, Holly. A masterful artist of dance and flight! His name is Adam Still. You would love him.
Fly to the box office!
Posted by David Marlowe Theatre Reviews at 1:35 PM